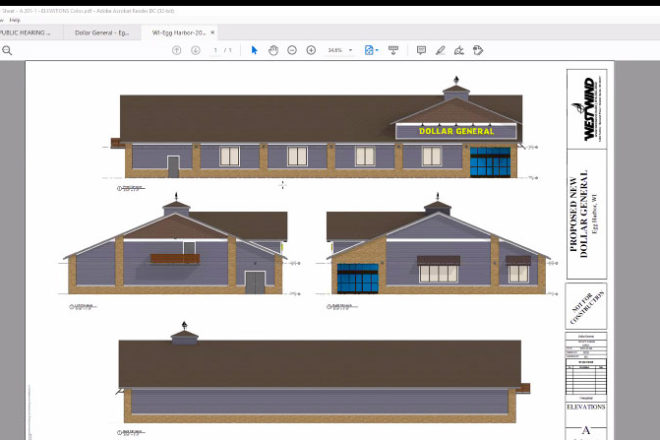 It is a busy Monday for northern Door County municipalities.

In the Town of Egg Harbor the Plan Commission performs an architectural review of two projects Monday, including the Dollar General proposal. That meeting begins at 6 pm. Links for virtual attendance can be found in the agenda here>>

Also Monday, the Village of Egg Harbor Board of Trustees meets at 6 pm. Among the items on the board’s agenda is discussion of a moratorium on Conditional Use Permits. The Village of Sister Bay issued a six-month moratorium on such permits as well as new lodging developments so it could update its zoning code.

Discussion of special assessments is back on the agenda for a Special Meeting of the Board of Supervisors for the Town of Gibraltar Monday. The town heard from many frustrated residents during public comment at a special meeting Feb. 24 to discuss the assessments it plans to levy for sidewalks and street lights that were completed as part of the Highway 42 reconstruction last summer.

The Ephraim Village Board will be talking a lot about project funding mechanisms at its monthly board meeting Tuesday. First up is discussion of raising room tax from 5.5 percent to 8 percent. The board will also discuss its plans for a referendum to institute a Premier Resort Area Tax that is slated for April’s ballot. Also up for discussion is the portion of room tax returns allocated to the Ephraim Business Council.

On Wednesday, the Climate Change Coalition will host a virtual discussion about the Green Tier Legacy program on Wednesday, March 10. Egg Harbor, Ephraim, the Town of Gibraltar and Door County are all participants, and other county communities are exploring the program.

Last week on the Door County Pulse Podcast we went behind the pages for a glimpse at the inner workings of the Pulse. First, we talked to photographer Brett Kosmider about the story behind his photo that recently won second place in the Wisconsin Newspaper Association’s Better Newspaper contest. That conversation includes a special guest, Matthew Moellendorf, the man who made the image so unique.

Then Andrew Kleidon continues his look at the history of the Pulse with co-founder David Eliot. It’s part three in a journey through 25 years and counting of the Pulse, with a look at the many dwellings the paper called “office” in its formative years.