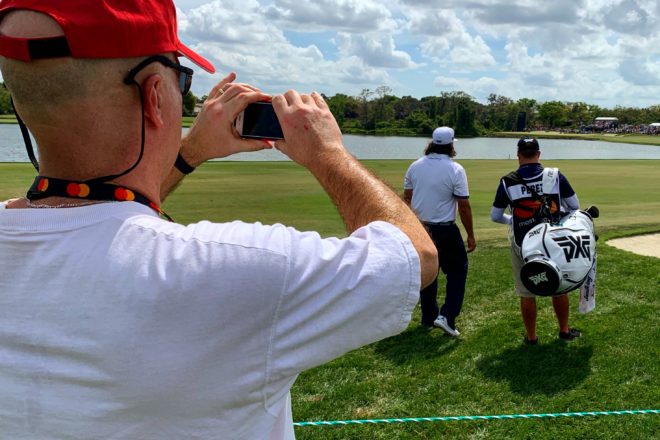 Troy Zak catches a photo from behind the rope at the Arnold Palmer Invitational in Orlando. Submitted.

A golf writer joins the gallery

This gig has been good, that’s for sure. When not profiling the people and places that define golf in Door County, I get to do it on a national level at GOLF Magazine. There’s a big golfy world out there.

It has Tiger Woods and Brooks Koepka, St. Andrews and Pebble Beach, celebrities and yachts and little prop planes. It’s all pretty fun to catch a taste of. Those plane rides take you to some crazy places, too, like up over the Firth of Clyde in Scotland and swooping low over the Knik Glacier in Alaska. Somehow, all of it in the name of golf.

It’s been a wacky five years, but when asked to consider my favorite place where the gig took me, the answer was a lot more ho-hum. It was Orlando in the spring, seeing golf through the eyes of a fan.

Pro golf tournaments can blend together. The PGA Tour takes its traveling circus of grandstands, ropes and manicured greens from one major city to the next. The LPGA Tour does much the same. Orlando fits into the schedule between south Florida and north Florida. Between Mexico City and New Orleans, San Diego and Charlotte. As a media member, it becomes a game of “finish one, on to the next.”

But at the Arnold Palmer Invitational this March, for the first time, I finally turned in my press credential for a ticket and a view from the other side of the ropes. My first impression? I don’t know how you people do it.

Golf courses are sprawling. The 18th tee is over here, but the 5th hole is — lemme check this map — more than a mile away?! Better get walking. And on a steamy afternoon in Florida, those walks are no fun. The sun is unrelenting, and without a beach in sight, no, there isn’t much breeze. Just some shade from the occasional oak tree. It’s on walks like that, however, from one corner of the tournament to the next, when you see the true beauty of the game at its highest level.

Every group and every hole is an opportunity for something new, and really, to see something you don’t get on television. Any given event has some 150 players, some of whom are playing great, many of whom are playing average and even some who are playing worse. That spectrum means you will see far more “bad” shots in person than you’d ever see through the glass of your television monitor. This aspect was important for my cohorts down in Orlando.

My father and uncle joined me that day for one of their first PGA Tour viewing opportunities. As we walked along the 6th hole at Bay Hill Club and Lodge, one tee shot was sprayed far and right of the fairway. Pat Perez, a 43-year-old Tour player known best for his ability to keep it real — profane and otherwise — calmly walked up to where his mis-hit had landed. He was displeased with the result, and when his next shot went just a little bit farther than he’d hoped, he lived up to his reputation by shouting that four-letter F-word. Suddenly, the beating sun didn’t seem quite as important.

Perez was on his way to a bogey while Rory McIlroy — you’ve heard of him — was up on the green. McIlroy had already made three birdies in his first five holes, and when he splashed up onto the green from the bunker for a fourth circle on his scorecard, everyone on the property could hear it. That’s the magic of McIlroy. He’s the European prodigy turned international star. And when he gets going, few people are more captivating. Thus, the crowds at Bay Hill leaned in his direction.

That made life difficult for this media man. There was no walking inside the ropes with Rory. Not today, at least. It’s more walk out ahead of Rory, anticipate where his shots will go, find crevices within the crowd and hope his golfing highness comes your way.

When he sprayed his approach on the 9th hole, we were just a couple dozen feet out of position. McIlroy was all of 50 feet away, but we could not see him. He is five-foot-nine, after all. Everyone who could catch a glimpse of him made their shadow even bigger by sticking their camera phones in his direction. On 364 days of the year, this annoys me, but on this day, it was refreshing. It felt like desperate moves to capture something fans knew they’d want to see again and again and again.

McIlroy clipped his shot from the wet, downtrodden spectator viewing area and spun his ball to just two feet from the hole. It was a tap-in par that felt all the more magical because we saw it in person. His  momentum continued.

In my day job, regardless of where I was watching from, this simple up-and-down par would have had me wondering:

How is he going to get out of jail here, keep urging his name up the leaderboard, get in position for his first Tour win in what seems like forever, defend his decision to use his best friend as his caddie and spur himself on to success at the Masters, where he’ll need momentum to finish the career grand slam and reassert himself as the dominant player in the post-Tiger era?

All of that nonsense swirls around constantly at GOLF.com. But here on a single day in Orlando, when tens of thousands (and I) were tromping through the muddy slopes, all we cared about was seeing a man work his way closer to the hole better than we could have hoped to ourselves. The fascination with and concentration on golf’s minutiae can get lost when working on the company dime. But not when you’ve shelled out $62 for a ticket.

The rest of the day included an impromptu trip into the corporate hospitality suite, where the chicken and burgers were complimentary, as were the chocolate-chip cookies. The bloody marys were tinged with the perfect amount of spice. Life was good.

When we sat down, we noticed, of course, a Packers hat in the row ahead. Wisconsinites are everywhere, it seems, especially when winter drags out in the Badger State.

As you might imagine, turning the ticket back in for a credential was not very fun.