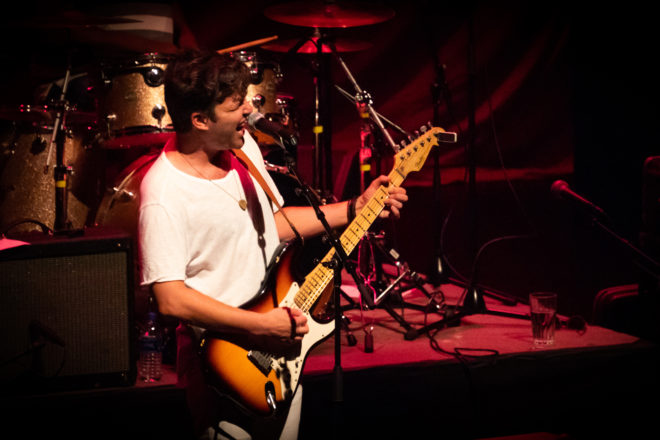 Carey spoke of his love for Door County multiple times, including through two songs dedicated to the peninsula. Photo by Rachel Lukas.

It was obvious as soon as Todd Carey and his bandmates came on stage that their performance would be special – their wide smiles and bright energy created a fitting atmosphere for Carey’s first live performance in 16 months.

He opened with songs befitting the Door Community Auditorium (DCA): “Wanna Be” and “Live a Little,” which tell of his love for Door County.

These tracks and others from Carey’s album, Feel Good, achieved his goal for the evening of spreading good vibes and love, and he shared that love – and the spotlight – with everyone.

Only a handful of songs into the night, he handed the mic over to drummer Rodney Flood, who flooded the auditorium with his powerful voice, belting out covers such as Marc Cohn’s “Walking in Memphis” and Stevie Nicks’ “Landslide.” You may think you’ve already heard the fullest versions of these American staples, but with Flood’s passion, it was hard to tell whether he or the audience had the most fun.

Carey has performed with the likes of John Mayer, Jason Mraz, The 1975 and Train, but his local ties are just as significant: At his family’s cabin in Sturgeon Bay, he recorded demos for the album Watching Waiting. From the stage, Carey reminisced about childhood memories of being in the audience at DCA, such as when he saw Johnny Cash play in 1996.

It wasn’t long before Carey had the audience singing along and dancing in their seats. He returned to his previous album with tracks such as “My Kind of Crazy” and “Light Her Up.” He then invited one of his Door County idols, Cathy Grier, to the stage.

The night continued with some instrumental features: The spotlight shifted to Flood again during a song with thunderous drum solos, and it later landed on bassist Paul Taylor, who’s moved to Door County from Memphis and who filled the auditorium with a rhythmically complex bass solo. Taylor released a new album, It Is What It Isn’t under the alias New Memphis Colorways in May.

Carey ended the night with an energetic conglomeration of boy-band songs, but this finale marked just the beginning of his summer plans for live music.