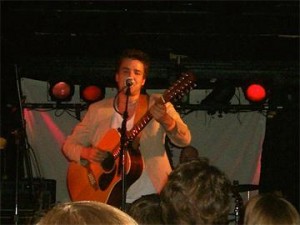 MTV Online described this young, new artist as a “talented musician with a lot of energy and an established following…you won’t be disappointed.” And it’s hard to imagine being disappointed while listening to his latest album, Watching, Waiting, which is full of unique, contemporary pop-rock.

His songs are complex and emotionally stirring – the type that pull on your heartstrings and leave you humming for hours. His Web site claims that “Watching Waiting sticks out like an oasis of emotionalism in a cynical rock-n-roll wasteland,” and anyone who listens to the CD would be hard-pressed to disagree. Watching, Waiting tells the story of Carey’s return to the Midwest after he tried a musical career in Southern California. His charismatic stage presence helped transform the LA-based group Telepathy into one of Southern California’s most successful club acts. Despite this success, Carey felt restless. On his Web site he says he missed playing shows in the Midwest: “It was the live thing, I missed playing shows for audiences who really wanted to grow with their artists.”

Carey then moved to Chicago and began his career as a solo artist. His music resonates with hope and longing, and has a wise, old-soul voice despite Carey’s youth. The sound is similar to that of artists such as Jamie Cullum, Jason Mraz and Ari Hest, though it is refreshingly unique.