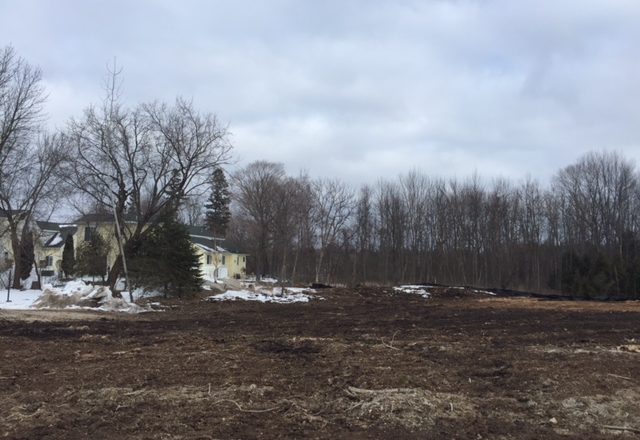 The Town of Gibraltar cleared a wide swath of land to make way for expanded parking behind the town center. The town has been cited for failing to acquire proper permits before clearing began. Photo by Myles Dannhausen Jr.

Pete Van Sistine said he and his neighbors were stunned when crews began plowing down trees adjacent to their property Feb. 22.

“We started calling around to find out what was going on,” Van Sistine said. “It was shocking.”

The Van Sistines live in the Birch Grove condos, the yellow condos in the center of Fish Creek that abut the town’s long-term boat trailer parking behind Hat Head (formerly Spielman’s Kid Works).

The town approved a plan to expand the parking lot at its Dec. 6 meeting, including instructions that consultant Bob Kufrin and engineer Peter Hurth from Baudhuin Engineering meet with adjacent property owners before work began. While some neighbors were consulted, Birch Grove condominium owners were never notified because Kufrin said the parking stalls will not be close to their property. Instead, a stormwater retention pond will be built behind the condos to capture runoff from the bluff.

A visit to the lot, however, shows that the clearing and digging done for the parking lot and stormwater retention pond continues up nearly to the patios of Birch Grove condominiums. When finished, the lot will include 133 spots for cars and 60 long-term boat trailer parking spots.

It now appears the Van Sistines weren’t the only ones caught unaware. On Tuesday, March 13, the Wisconsin Department of Natural Resources issued a notice of noncompliance to the town for failing to acquire a stormwater runoff discharge permit, which is required on file 14 days before any work can begin, according to Sarah Anderson, DNR stormwater specialist. Work on the lot has stopped until proper permits are acquired.

Hurth said March 12 that he was in the process of obtaining a conditional use permit from the Resource Planning Committee, a land disturbance permit and shoreland zoning permit from the DNR, but did not have those on hand when work began.

Outlines for expanding the parking lot were included in the town’s much-publicized Waterfront Master Plan. Those plans were unveiled in an open house in May of 2016 and published in November of 2016 and available on the village’s website. The site plan was approved unanimously by the five-member board Dec. 6, but supervisors Brian Hackbarth and Steve Sohns said they didn’t think that meant the project was finalized.

Fellow supervisors Dwayne Daubner, Barb McKesson and town chair Dick Skare all said they interpreted that vote as approval to move forward. On Feb. 7, the board voted to put the project out to bid in a 3-2 vote. But at a Feb. 21 meeting, Skare motioned to rescind that vote, and hold a new vote to award the contract to the Door County Highway Department, which has handled similar paving projects for the town. That vote passed 3-1 (Hackbarth was absent for a portion of the meeting due to a work emergency). Sohns was the lone vote against it.

“We didn’t have anything in our packets about the vote or bid,” Sohns said. “I felt we were pushing it through to fast. The next morning they were cutting down trees.”

Skare said the new vote was taken because the Highway Department had answered several questions the board had raised at earlier meetings.

Hackbarth has questioned whether that vote was legal, since it was taken under an agenda item labeled simply “Parking Lot Project.” He raised the legality issue the night of the vote in a message to Town Clerk Beth Hagen and Skare.

“I understand a vote to rescind a vote from a previous meeting took place tonight prior to my arrival,” he wrote. “That was not an agenda item for tonight, therefore was not a legitimate vote or action.”

Hagen sought an opinion from Rick Manthe, legal counsel for the Wisconsin Towns Association. Manthe replied that he could not definitively say the notice was sufficient.

“General principles of notice and agenda items suggest that a person should know what will be discussed and what action could be taken by reading the notice,” Manthe wrote.

The town previously posted agenda items in a similar fashion. At the Dec. 6 meeting when the parking lot site plan was approved, the item was listed on the project simply as “Baudhuin Parking Lot Plan.”

Van Sistine also questioned whether the lot is necessary. He said the existing lot is rarely more than 25 percent full. On Aug. 2 SEH consultants presented to the board the results of its study of parking in the downtown core. That study determined that existing parking lots were greatly underused, particularly the lot behind the town center and boat trailer parking lot. SEH recommended a laundry list of short-term improvements to wayfaring signage, public-private partnerships, and striping before adding more parking lots.

Skare agreed that the lot is underused, but that it will be necessary when the town expands Fish Creek Beach and removes parking on the beach property across the street.

“We do have to address the parking issue, especially as we improve and expand the beach,” he said.

McKesson said she understands the frustration of the neighbors to the lot.

“It’s a travesty that the people in the condos were not notified,” she said. “It was a mistake, and we as a board have to take responsibility for that, but it was not done in secret or with ill intent.”

Skare said all of the wood harvested from the project will be repurposed to create privacy fencing for neighbors, and that new tree plantings will be added to shield neighboring views.