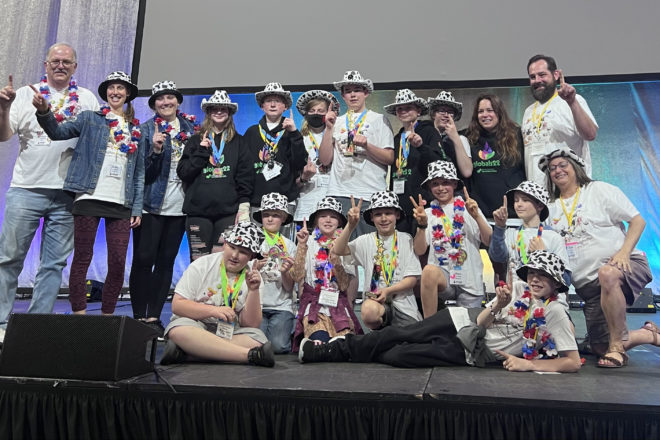 Members of Sevastopol elementary and middle school teams pose for a photo at the Destination Imagination global finals tournament.

Working as a team, looking for solutions to a problem, and showing precision and thoroughness in planning and construction helped the teams win global championships for projects and presentations in engineering and science.

During the past 30 years, Sevastopol teams have earned 14 global championships, but this year’s elementary school team had the distinction of winning in a category that was not related to structure-building for the first time in the Institute school’s history.

The Sevastopol elementary team of Shane Leist, Ryder Ortmayer, Will Ortmayer, Maggie Thomas, Silas Martin, Jackson Toivonen and Mayra Cordua Stenzel conquered the “Up Close” microscopy challenge. They not only used microscopes and learned about microscopic organisms, but they also topped 19 teams from the U.S. and Brazil that designed larger-than-life sets, backgrounds, props and characters in a microscopic world.

“Their skit involved hungry tardigrades who were looking for sushi in the water that exists in a bromeliad,” said Mindi Vanderhoof, who coached the elementary team along with Shelley Stenzel.

The elementary students not only won for their long-term project, but they also had the highest score in the tournament for quick thinking during an “instant challenge.”

The team met two or three times per week for nine months to perfect a solution to the DI “Roll with It” engineering challenge. The Ultimates scored extra points for developing a storyline and skit that tied together how they creatively designed the best objects to solve two technological and mechanical problems.

“Our challenge was to build a structure that could roll down a ramp and hold as much weight as possible,” Mathews said. “Our structure was 26 grams and held over 1,000 pounds.”

The Ultimates’ tiny structure on wheels rolled down a ramp and struck a strength-testing obstacle without breaking or derailing. The team developed a storyline in which accomplishments by the building team opened imaginary gates or passageways to help team members complete a daring escape from a temple hidden in a mysterious forest.

“Liam Schultz was our builder,” Mathews said. “We had to build a structure, and then we had to build a story that goes with the structure. We used a lot of engineering and electrical components in our props, so we learned how to work with that. Story leaders were Ben [Martin] and Zoey [Copiskey].”

Middle school teammates Evan Isaksen and Marcus Mann also joined in the technological, storytelling and engineering project, with support from coaches Nick Schultz and Jenny Hobart. The Ultimates also earned the Renaissance Award for demonstrating “extraordinary amounts of effort and preparation in their solutions or outstanding skill in engineering, design or performance.”

Longtime program volunteer mentor and supporter Jerry Borkovetz said the middle school group used art and collaboration skills to design elaborate, changeable backdrops. They dreamed up several obstacles to overcome, such as traversing an imaginary fire and avoiding a rolling coffin that had a skeleton in it with eyes that lit up. They also encountered snakes that they made with pop-can tabs and corks donated by local wineries, Borkovetz said.

“One of the challenges was to have a revolving object,” he said, so “they made an electromagnet and magnets attached to a bicycle wheel. They pulsed the electromagnet with a photo eye so it would cycle on and off to attract the magnets on the wheel to keep it spinning. They had a very technical solution and scored very well.”

Sevastopol School District teams had already built a reputation for strength in STEAM – science, technology, arts, engineering and math – before STEAM became a catchphrase, Borkovetz said. He began helping the students in the program back in 1993 when it was called Odyssey of the Mind.

Borkovetz said that Door County, Kewaunee, Algoma and Manitowoc schools have been strong competitors in DI, and one year, Sevastopol and Gibraltar finished No. 1 and No. 2, respectively, at the global meet.

Some schools have focused on robotics in recent years, such as teams from Washington Island and Southern Door that advanced to major competitions this spring.

Sevastopol district leaders stay focused on the DI extracurricular activity for many reasons, and they receive financial and volunteer support from the community to help families afford the trips involved and to help students build life skills.

“It teaches kids how to collaborate creatively and to become critical thinkers, which is important in our world,” Vanderhoof said. “They put in a lot of hard work. Nothing worth it is ever easy.”

Former coach Ann Rabach said it’s important for teams to have students who are leaders in arts, engineering and building. It’s also important to draw in students who have a lot to offer but don’t realize it.

Team members who qualify for global finals usually meet students from up to 27 countries who are among the half-million DI participants worldwide. Vanderhoof said only six countries sent teams to Kansas City this year, however, because of COVID-19 concerns and other factors.

“The Ukrainian affiliates didn’t come,” Vanderhoof said. “I believe they said there were 49 teams practicing in Ukraine.”