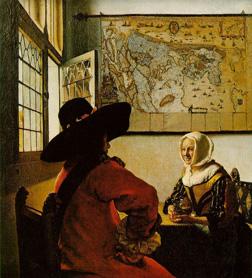 Vermeer’s Hat: The Seventeenth Century and the Dawn of the Global World

In Vermeer’s Hat: The Seventeenth Century and the Dawn of the Global World Timothy Brook presents a new vision of this great painter’s art. Art historians have traditionally discussed Vermeer’s genius in terms of his use of texture, light and shadow, placement of the vanishing point, color, mass, and space. Timothy Brook’s unique approach examines the objects in Vermeer’s works and what they reveal about Dutch culture at the time, as it was radically different from the past. After reading this novel way of viewing a painting, I realized that objects in works by other artists will in the future raise a whole series of questions in my mind. Questions such as: What are the objects and why are they there? Where did they come from? What do they tell us about the culture of that time and place? What do they tell us about their owners’ social status? What historic information do they convey?

Brook raises all of these issues in his discussion of several of Vermeer’s paintings and makes it clear that these objects tell a story about his life and times. Brook presents the “broader historic forces” which the objects represent. For example, in the landscape “View of Delft” (1661) Brooks identifies a long low building with a red roof as the Delft Chamber of the Dutch East India Company, the first ever of such powerful franchises to control markets thousands of miles away. Its dominance in the orient spice trade was the envy of other countries, especially Portugal and Spain.

“Officer and Laughing Girl” (1658) reveals a connection with the French North American beaver trade in the officer’s felt hat because these hats depended on beaver pelts for their superior quality. The officer’s red coat conveys his rank of some importance while the map on the wall suggests the Dutch trading commerce.

“Young Woman Reading A Letter At An Open Window” (1657) shows fruit in a tipped bowl. Its blue and white pattern has been known for four centuries as “Delftware,” but its blue and white design was derived from Chinese ware. Here we see the Dutch East India Company’s influence as it brought home the fine porcelain that only the very wealthy could afford but when copied in Delft was far less costly. The Turkish carpet on the table reflects Dutch trade with the Middle East. The young woman’s letter implies a communiqué from her soldier or merchant seaman far from home. “The Geographer” (1669) ponders a chart while others lie on the table and the floor, again suggesting the extent of Dutch commerce as a Turkish rug lies crumpled on the table.

In “Woman Holding A Balance” (1664) a woman, probably Vermeer’s wife, weighs coins. Several gold coins lie on the table next to a large silver one. It is this silver one that commands attention. Vermeer lived at the end of what was known as the “silver century” (1570 to 1670). The discovery of silver in the Andes Mountains, in what is now Peru, released into the world more silver than had ever been seen before. Commerce was conducted according to this silver standard. The Spanish controlled these mines from where they shipped the silver to Panama and subsequently to Spain but an illegal alternative route to Argentina sent silver to Portugal. Japan was another source of silver that made its way into global commerce. The presence of this coin in the painting reflects the newly emerging international trade.

Brook discusses two works of art in Vermeer’s Hat that were not of Vermeer’s making but which depict more information about his time as well. One is a blue and white china plate from the Lambert Van Meerten Museum in Delft. This “Delftware” plate shows several Chinese figures, one of whom smokes a pipe. To our modern eyes, it is not his smoking that may appear unusual but his riding a tiger-dog! The smoking, however, indicates another international commercial enterprise – that of tobacco. In other words, the plate reveals that this North American crop had not only made its way to Europe but also to the Far East. Finally, in “The Card Players,” a painting by Hendrix Van Der Burch (a contemporary of Vermeer), a small African boy pours wine for his mistress. How did this boy get to Holland? Free or slave, he is now in a country far from his home. The trade in human cargo has entered Holland.

Thus Brook raises issues in Vermeer’s Hat that far exceed the usual approach to analyzing art. Suddenly it becomes clear why we call china “china” or how extensive and competitive the global market was becoming by Vermeer’s time. We see “smoking” in places far from Virginia. We observe how maps brought new ways of looking at the world. From felt hats to silver coins, from tobacco to oriental rugs, from fine porcelain to children carried in captivity, the world had changed and it would never be the same again. The next time you look at a painting what will you be seeing?