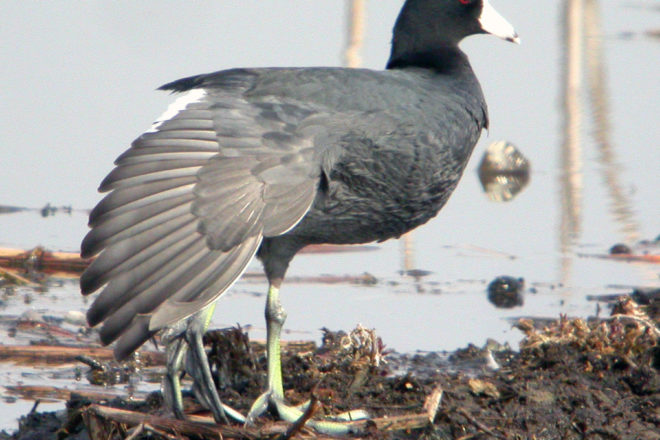 An American coot stretches a wing while preening its feathers. Photo by Roy Lukes.

It’s time to organize our Sturgeon Bay and Southern Door Christmas bird counts and look at the forecast for winter finch migration into Wisconsin. The news from Canada is that cone production on the spruce and pine trees has been very good, and many birch trees have a great quantity of seeds.

That means we may not see much of an influx of finches and other species that often spend the winter in our area looking for food and shelter. Last year the Sturgeon Bay and Brussels Christmas bird counts did report small numbers of redpolls and pine siskins. One very different bird is sometimes seen during these winter counts: the American coot.

Only one was seen last December during the Sturgeon Bay count.

We’ve had American coots reported during 12 of the 22 Sturgeon Bay Christmas bird counts, with a high of 784 in 2001. The Brussels count has recorded them in only five of the 21 years.

Even though coots look and act somewhat like ducks, they’re actually in the rail family. American coots are about one-third smaller than mallards and do not have webbed feet like ducks. Instead, their toes are lobed, with flaps of skin that help them swim and make it easier to walk because the lobes give some stability.

After the nesting season, coots gather in rafts of hundreds along lakeshores in the Upper Midwest. A common nickname for this plainly dressed, chicken-like bird is the mud hen. If you travel to other parts of the United States, you may hear about the mud duck, mud chicken, pond crow, shuffler, splatterer and white-bill, all referring to the coot.

Most duck hunters scorn these 16-inch, dark-slate-gray birds with large, white bills and whitish frontal shields on their foreheads, and they wouldn’t waste shells on them. My late husband, Roy, did shoot some on the Kewaunee River when he was a high school junior during his first attempt at duck hunting. Much to his mother’s disgust, they were hardly fit for eating. Roy traded his shotgun for a camera a few years later!

Coots are always moving on the water and occasionally dive to grab aquatic plants. The habitat they prefer is a shallow lake where reeds grow from the water, and sometimes we saw them on the north end of Kangaroo Lake. They do breed sparingly in northeastern Wisconsin, more commonly along the marshy west shore of Green Bay. Perhaps one of the largest nesting populations is in Horicon Marsh.

One of the coots’ nicknames, splatterer, refers to their skittering, splattering, splashy take-offs. First they swim rapidly while splashing their wings; then they begin shuffling and running along the water, finally taking to the air.

It is their rounded back, thick neck and downward-tipped bill that makes them easy to identify – and differentiate from a duck – while in the air. A coot’s flight is invariably not as speedy as that of a duck. When watching a coot attempt to take off, it appears that the rather plump-looking bird is too heavy to become airborne.

Watching a coot swimming reminds me of a mourning dove or pigeon as it walks. A dove’s head jerks forward each time one of its feet moves ahead. Likewise, a coot’s head appears to bob and keep time with its swimming feet. Being perpetual-motion birds, they are a real challenge to photograph.

Because the coot belongs to the rail family, it is closely related to the Virginia rail and the common moorhen (formerly the common gallinule), both of which nest in Wisconsin. The Atlas of Breeding Birds of Wisconsin indicates that American coots nest mostly in the southern two-thirds of the state.

Their continental range for breeding extends from the northern plains states to Wisconsin, Michigan, northern Ohio and across southern Canada. They are permanent residents in many areas of the western U.S. and are pests on golf courses and corporate lakes, just as Canada geese can be in our area.

Apparently the term “crazy as a coot” was derived from the high-pitched cacklings, guttural squawks and croaks for which the American coot is well known. The first impression of these outpourings may be that this bird is just plain noisy, resembling some barnyard fowl and far less melodious. All in all, the bird impresses some people as downright clownlike because of its incessant movements; long, splashy take-offs; and odd vocalizations.

On the other hand, it’s easy to admire the lowly coot for muscling up to the approach of winter by remaining here until well into December, long after most other migratory species have left for sunny southern climes. Late fall for me would never be complete without rafts of American coots, the clowns of the bird world.