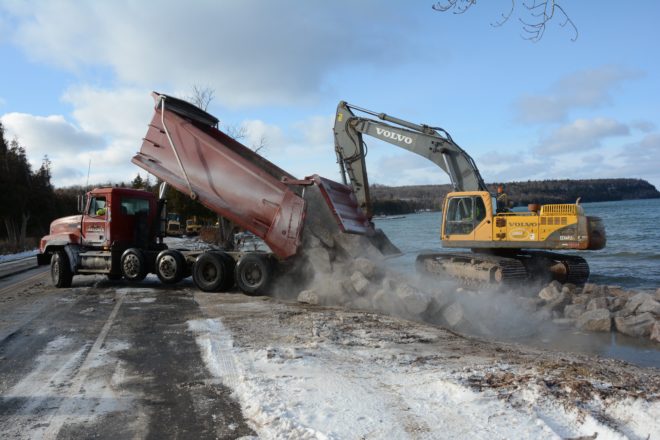 Crews place large rocks along the shoreline on the south end of Ephraim to prevent high water from eroding the shoreline and undermining the new highway. Photo by Tad Dukehart.

Now that the major highway reconstruction is behind it, the Village of Ephraim is making plans for additional streetscape improvements to piggyback on this year’s progress.

Administrator Brent Bristol said the highway work came in on time and under budget, leaving unused bond proceeds available to finish other projects. First up is storm sewer improvements on Hidden Spring Road and German Road,  as well as resurfacing the back roads of the village that were used as a detour during last spring’s construction.

Larson Lane, Hoganson Lane and Hidden Spring Road are in line for improvements after the already-rough roads took a toll during construction.

“Depending on how the numbers come in on bids for those improvements, we may have funds left to complete the sidewalk extension from the beach to the Door County Confectionery,” Bristol said. That extension would continue on the non-water side of the highway.

Bristol said the village is also bracing for higher lake levels next summer.

“Obviously with the proximity of our highway to the lake we have concerns,” Bristol said. “We’re working with Brian Frisque to do some elaborate elevation surveys downtown before we decide what we need to do.”

Bristol said the short-term concern is the village hall basement. The village maintenance crew has several sump pumps running year round right now to keep it dry, and recently installed a backup generator that proved its use during the power outage after Thanksgiving.

The Army Corps of Engineers is forecasting an increase in lake levels as high as 15 inches next summer. If that happens, water would approach the highway in the lowest-lying areas of Ephraim near the town marina. It would also reach some shoreline homes and cottages.

Strong northwest winds are already exacerbating problems with high water, and if levels rise as much as predicted, high winds would pose significant threats to basements, beaches, piers and roadways.

Earlier this week the Wisconsin Department of Transportation sent a crew to remove rocks and sediment obstructing culverts under Highway 42 near Brookside Lane. The crew installed approximately 400 feet of erosion barrier along the shoreline to stem erosion from water washing ashore and undermining Highway 42.