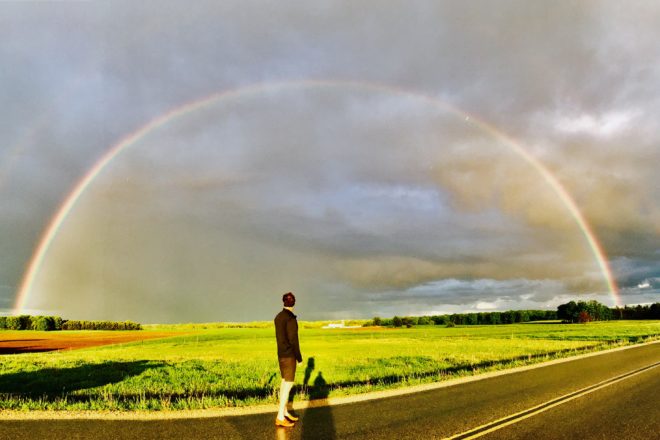 Ryan Heise finds a rainbow in the storm. Photo by Mary Heise.

Tornado chasers are fascinating people. All seem to be thrill seekers, most are scientists and some are likely to be certifiable. They ply around in their heavily armored vehicles overloaded with advanced meteorological equipment looking like something that just rolled out of a dust storm from a Mad Max movie. Juxtaposed to the tornado chasers is a far less known gang of weather chasers, the rainbow chasers. Have you heard of them? Me neither. However, my wife Mary and I were suddenly initiated into the gang of rainbow chasers on a late afternoon drive.

We prematurely left a hike having been chased out of the woods by raindrops. Hungry birds excited with the anticipation of a buffet of worms that surely would accompany the rain sang loudly as we scurried out of the forest, as if they were cheering our departure. As we made our way to the open field and the truck, we could see the popcorn rain showers scattered across the Door County peninsula. The cloud formations were formidable – tall, dark bluish-gray clouds with swirling white clouds underneath that appeared to have the capacity to spin into a wispy tornado at any moment.

No meteorological equipment needed for our rainbow hunt, we could see the numerous rain showers sprawled across the county. We zigzagged down country roads; the showers appeared, vanished, changed directions and appeared again. Looking toward the western horizon, a long, trailing, silver cloud faded into blue skies. With the potential appearance of the sun, the race was on and the impending threat of rainbows must have scared people off the roads because they were desolate and peaceful.

We rounded a bend in the road and the surrounding woods met abruptly with a field of green glowing brightly with the golden hue of the emerging sun. The excitement of the chase getting the better of me, I quickly pulled the truck over, unnecessarily skidding into a stop on the loose gravel on the side of the road. After a well-deserved eye roll from Mary, she leapt out of the truck into the thick, knee-high grass and looked to the sky with amazement.

Coalescing in front of our eyes was a vibrant glimmering rainbow standing proudly in the field. A few seagulls danced through and around the colors of the rainbow on wind bursts from the surrounding storms. A barn blazed a bright red off in the distance, long accustomed to being the most colorful site around; it gladly relinquished its crown to the rainbow and sky on this day.

A warm front creeps up from the south on Thursday evening bringing us comfortable temperatures for Friday. There is a chance of showers and storms Friday and Friday night but appear to be isolated on what will otherwise be a pleasant sunny day. Saturday will be mostly sunny, but a bit cooler. Another system approaches on Saturday night this system would bring another round of steadier rains and increasing northerly winds. Any lingering rain would end Sunday during the day for most locations.

Friday: Mostly sunny, with a high near 68.

Saturday: Mostly sunny, with a high near 63.

Sunday: A chance of showers. Partly sunny, with a high near 61.