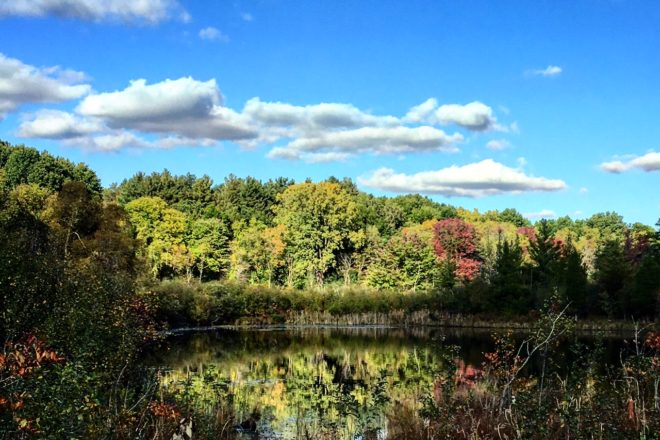 A foggy morning gave way to a bright blue afternoon, and wet golden leaves began to dry and curl in the sun. These fall days almost require a walk in the woods, and as I drove past pumpkin patches and yellowed soybean fields, I looked forward to the solitude of a quiet autumn walk. 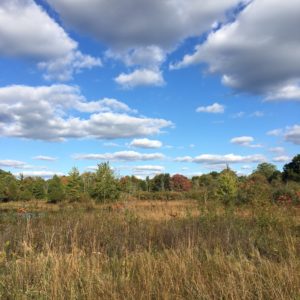 Arriving at the trailhead, however, the parking lot was full. Dogs and children were bursting forth from SUVs as parents inspected the map. Couples and friends laughed as they tied sweatshirts around their waists and flipped their sunglasses atop their heads.

Looking at the map on my phone, I calculated that if I took the toughest trail, three miles with lots of steep hills, I would be afforded the most peace. Looking up, I witnessed every single man, woman and dog gleefully bounding down that very trail and into the deep green woods. OK, easy trail it is. I had never tried this one and was looking forward to seeing something new.

Around the first bend, I entered a cathedral of white pine, tall and straight, the first needles not appearing until at least 60 feet in the air. The tops gently swayed as the warm breeze whispered across the woods. Next, wandering off of the trail, I climbed through the gray blue bramble and up a hill overlooking the steamy fen.

Looking for a nice felled tree to sit on, I was stopped in my tracks by the biggest group of Chicken of the Woods mushrooms that I have ever seen. Like huge bunches of soft peach cabbages, they populated almost all of a 20-foot section of downed tree. Off the trail, high on a hill, and atop my fungi throne, I watched as groups passed below me, discussing new restaurants on their way to the lush fen. This was probably the most popular spot in these woods, and even had a sturdy boardwalk that cut all the way across, connecting to a 62-acre island of White Pine. Making my way down the hill, now covered in burrs and various sticky seeds, I was ready to trade in my solitude for a closer look. 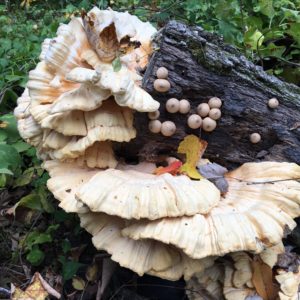 The spongey fen was alive with lavender Asters, pink Joe Pye Weed, Goldenrod, and brown, velvety cattails. It also had spots of open water, which mirrored the orange and red changing trees.

Climbing down off of the boardwalk onto the soft bouncy ground, I looked up to see six hawks riding a thermal. Glancing down, something blue caught my eye, a flower that I had never seen before. Draped over the narrow boardwalk for a closer look, I was intrigued. Its deep violet-blue petals were fringed, and closed in a graceful twist. It was a Fringed Gentian. The vibration of footsteps on the boardwalk broke me from my reverie. A couple passed, and I offered up a standard, “beautiful day…” “It is when you get to live like this,” the man replied, and I couldn’t have said it better myself.

Friday will bring increasing winds from the south, which will pull warmer, slightly moister air into Wisconsin with perhaps a few more clouds around. Without any systems in the area for the warm air to mix with to create precipitation, a dry forecast should hold. Max temperatures to range from the middle 50s.

Look for precipitation chances to also increase over Door County on Saturday, likely in the evening. Max temperatures by Saturday to go above normal with readings into the lower to middle 60s. Expect to see at least a potential for locally heavy rain with amounts approaching one-half inch, and possibly a few thunder booms. A weak area of high pressure should then move into the western Great Lakes for Sunday and allow for at least partly cloudy skies, mild conditions and no precipitation. Max temperatures Sunday will be close to Saturday’s values, perhaps a degree or two cooler. 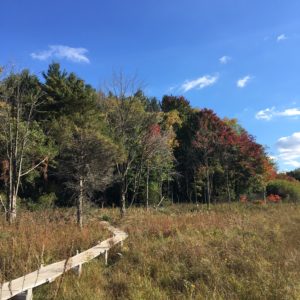 Saturday – Mostly cloudy, with a high near 64.

Saturday Night – Showers likely, mainly between 8pm and 2am. Cloudy, with a low around 55.

Sunday – A chance of showers. Mostly sunny, with a high near 64.