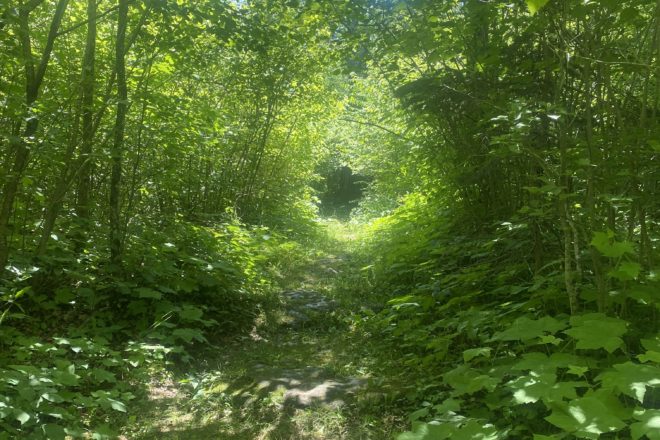 The east side of the Newport Trail and the Ridges Trail offer plenty of shade from the sunny days at the state park. Photo by Erica Bouska.

This week’s installment of the Trails of Newport State Park Challenge covers three trails: Sand Cove/Duck Bay, Lynd Point and the east side of the Newport/Ridges Trail.

While exploring these three, I did come across more wildlife, so don’t be startled if you see animals. Birds, squirrels and other creatures call the parks home, and you’re much more frightening than that tiny garter snake slithering across the path.

It’s also heating up across the county, and as these trails get longer each week, remember to dress appropriately, take water and respect your limits.

This trail is the first coastal trail in the challenge, and it provides a good reminder of why bug spray is so important. But with the bugs comes access to the main beach of Newport. The cool water and views overlooking the bay were welcome accompaniments along the first mile as the trail curves and slopes along the coastline.

The elevation levels are moderate, with a few steep inclines along the path, but people who lose their footing easily should take care and have a companion along as they traverse these roots and rocks. As someone who likes uneven trails and hills that make me balance myself on nearby trees, however, I thought this hike was great.

During my monthlong exploration of Newport, the Lynd Point Trail has been my favorite so far. Starting from parking lot 3, it begins a short way into the Europe Bay Trail and follows the coastline, including Lynd Point, before cutting back through the forest and meeting up with Europe Bay again.

The whole loop took me about an hour and 10 minutes and granted me some of the prettiest views I’ve seen so far in the park. Because it cuts along the shore, there are plenty of times when the trail runs up against the water or provides easy access to the water courtesy of a short offshoot trail.

A few of the access points lead to cliffs that provide nice views, but more often, they lead to the beach or to a place to sit on the rocks. And the breeze that floats down those sections of the trail made the tropical day bearable.

Besides the views, this trail provides necessary shade from the sometimes relentless sun and was surprisingly lacking in bugs for being so near the water. With the cool water, a nice reprieve as July and August bring the heat, it’s a good way to find beaches less populated, though they are much smaller and less ideal for sunning.

If you have an interest in the county’s geography, examine the Lynd Point Trail’s many rocks. Though the plants do encroach a bit on the trail, and it’s uneven in elevation and terrain, it ranks near the top of my list of favorite trails in the county.

To juxtapose that, the east end of the Newport Trail and Ridges Trail are even in elevation but uneven on the pathways, with rocks, roots and raised mounds of dirt throughout the hourlong trek. But like Lynd Point, there’s plenty of shade to stave off the sun, and the forest is lovely when it isn’t boiling outside. The path is quiet, and I didn’t cross anyone when I traversed it.

It’s the most forest-central of the paths I’ve visited so far, and if you’re looking for a simple, but pleasant hike, this is the trail I’d recommend. It’s less about what you see and more about giving you a break from everything else. For those who hike to get away from the world for a while, this one’s for you. It’s also a good distance that isn’t taxing.

If you’d like to join the Trails of Newport State Park Challenge, show up any Thursday at 9 am at the parking lot designated for that week’s hike. Check the Newport State Park Facebook page or dnr.wisconsin.gov/events/location/newport for the exact meeting locations and hike details.