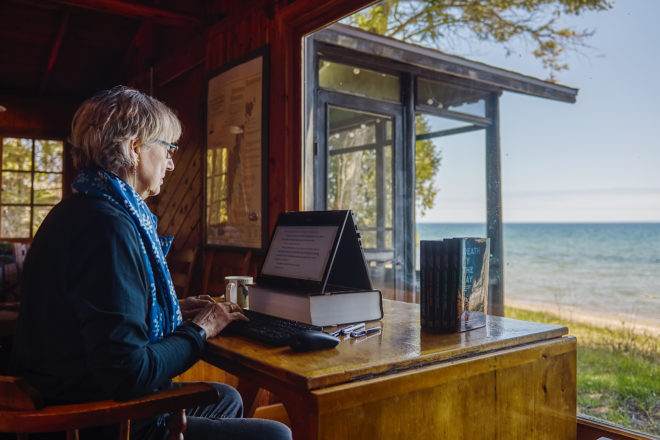 Ben Franklin did it in the bathtub.

Toni Morrison in a motel room.

Stephen King on a table between the washer and dryer.

Where authors go to access their creativity often begins with their physical space. Whether it’s a bustling coffee shop or a secluded study, the end game for writers is the same: to immerse themselves so deeply in their writing project that their physical space becomes irrelevant.

Here we connect with a handful of local (and locally printed) writers to catch a glimpse at the places where they practice their craft.

‘Fighting off the cold, fending off darkness’

I hate to say “go down in the dungeon” because that doesn’t sound so nice, but it’s a corner of the basement. I can just go there and do my thing.

The portion of the basement where I have a desk and bookshelves and things set up is actually quite a dark corner of the basement, and quite honestly, it’s a bit chilly, especially working down there in the wintertime.

I think that there’s something that’s really fascinating and interesting about having a desk lamp set up, being able to turn on a portable heater, being able to take a good fleece blanket and wrap it around myself as I work. I don’t know what it is about that combination — if it’s metaphorically fighting off the cold, fending off darkness — because I think in some ways my writing thematically lends itself to that. Maybe there’s a kind of weird serendipity … I’m putting myself in an environment where physically I’m doing the things that I’m attempting to do thematically in my work as well.

‘Wait for deer or something to come by’

I have a small home office that I use, and then we have a cabin in the Upper Peninsula of Michigan. Generally when I write up there and it’s nice, I write on the deck. I love to sit there and stay out of the sun and write, wait for deer or something to come by. The thing about going up north to the cabin is, my phone doesn’t ring, I’m not switching laundry, I’m not doing all those sorts of things. I’m not interrupted by those types of things whereas when I’m here at home, you get interrupted more here at the house. Up there it’s extremely quiet. That’s probably one of my favorite places to write. If I can get up early and get out on that deck with my coffee pot, I try to create uninterrupted time.

‘The day I’m done writing, I probably am done with coffee, too’

I’m telling you, there’s no one in America who knows more about coffee shops to write in than I do. There’s no way.

I’ve probably written in 700 coffee shops across America. I just went on a long rant to my wife about this the other day because I feel like my personality is made to be a barista, but my skill set or whatever is writing. I like engaging with people. I actually like talking, I like small talk, I like chatter, I like banter, but being a writer is a pretty freaking lonely existence. You’re by yourself a lot. You’re in your head a lot. You’re hyper focused on what you’re doing, so it’s not a natural fit for me personality-wise. Going to coffee shops — the illusion of social interaction — it’s like, at least there are people around. You talk to the barista, you talk to the guy sitting next to you, and those sorts of things kind of give you some engagement that otherwise I don’t have.

I feel like coffee shops have improved my content. I swear to God I do. It’s almost like a baseball player. I’ll get on a hot streak at a certain coffee shop, and I’ll keep going there until I feel like I’m not writing well anymore. If everything’s flowing and every day 2,000 words are coming out onto my laptop when I’m working on a book, I keep going back to that same Starbucks or Pete’s or independent coffee shop until it stops working. I have a bad day, then I’ll find something new. It’s not loyalty to a coffee shop — it’s loyalty to writing.

‘An almost infinite supply of inspiration’

I usually write a draft in my husband’s study or in our sun room, sitting in a mid-century Danish Modern chair with a yellow pad and pen or pencil.

I find in Door County an almost infinite supply of inspiration for writing poetry, letters, essays, talks, etc. I think it is the particular blend of nature and culture that is so stimulating. We live on 31 acres of woodland above the Ephraim “swamp,” with its large population of deer, coyotes and birds, where something happens every day.

Place is more a starting point or a point of view for me than it is for some, perhaps because I had an itinerant childhood. My father was a musician who had to teach to earn a living and kept looking for a more satisfying job. I lived up and down the East Coast and learned that the world is constructed differently in different places. That awareness informs my writing and my sense of place. Writing sharpens that process of seeing this place or any place. It focuses my attention and puts the moment of seeing and understanding in context.

‘There’s something about the lake that is eternal’

My cottage [in Door County] is 100 feet away from Lake Michigan. It’s one of these classic, old log cabins, and it has a screened-in porch so I either sit out there, weather permitting, or I sit in front of a big window in the living room area and move a table so I can put my laptop down and look right out the window so I’m looking at the lake.

I’m totally inspired by the place where I am. In fact, it was the setting of Door County that inspired the very first book that inspired the whole series. It happened because I was sitting on the beach on a gorgeous day just right on Lily Bay near Sturgeon Bay, and sitting in the very same spot almost at night on a very, very dark night. There was complete cloud cover, so there were no stars and no moon. It was so dark you couldn’t see a thing. It was kind of eerie, and I started thinking about, wow, I’m at this place with this beautiful veneer like travel-brochure perfection, and then this complete opposite at night. That particular night was so dark, so I was thinking about the contrast between day and night, good and evil, light and dark. I thought, well, what about a mystery where you have this perfect place on the surface, with these sinister forces at work beneath it?

I go back and forth from Chicago and Door County, and it’s 240 miles or so from door to door, and yet it’s the same body of water. That’s pretty amazing when you think about it. It’s a very powerful geographic and physical presence. Definitely part of the inspiration for the series is just that there’s something about the lake that is eternal, and we all come and go.

Take a small chicken coop in the woods, stabilize the construction, line the walls with fragrant white cedar and add a heating unit that will safely function for 50 years. Then add a desk and chair; tables for a printer and copier; an easel for painting; three or four truckloads of books, papers, letters, works in progress (and completed), photos, art, voodoo and doo-dads, signage, a cone of piñon to be burnt in a small adobe incense burner, and coffee mugs filled with marbles, rocks (and coffee). Hang a free-swinging crystal quartz in the eastern window, and what you have is a replica of Norbert Blei’s mystical writing space: the Coop.

When Norb moved his family to Northern Door in the late ‘60s, the small home they purchased allowed scant room for space needed to write — both creatively and to provide income through freelance work for the Chicago Tribune. The abandoned chicken coop on the property provided him that space for the rest of his life, and it became his place of solace, inspiration and peace.

An early riser, Norb brewed coffee, filled his thermos and headed out to the Coop between 6 and 6:30 am every day. Weekends brought some variation, but with rare deviation, he worked in the Coop until noon, returning after breaks for mail and lunch until dinner and the 6 pm news hour.

Norb’s drive to record impressions of his days was nearly more encompassing than his actual experience. His notepads were everywhere — in the car, the breakfast nook, next to the La-Z-Boy chair where he read while listening to music and news in the evenings — for scribbling thoughts that needed to be captured. But it was in the Coop where he brought them to life.

The Coop called him, comforted him, surrounded him in the good juju that fed the fire to create. Being away from the Coop was a sorrow for him. It was his holy space, and if you didn’t understand that, you didn’t know Blei. He was rarely blocked from the pull to be there. Even on days when it was blocked with snow, he’d shovel his narrow path through the worst of it. If he wasn’t in the Coop, he was thinking about it!

Never one to lean to extravagance, Norbert Blei knew what kept his spirit whole, and it was solidly instilled in a small chicken coop that encompassed, and reflected, his huge, loving soul.