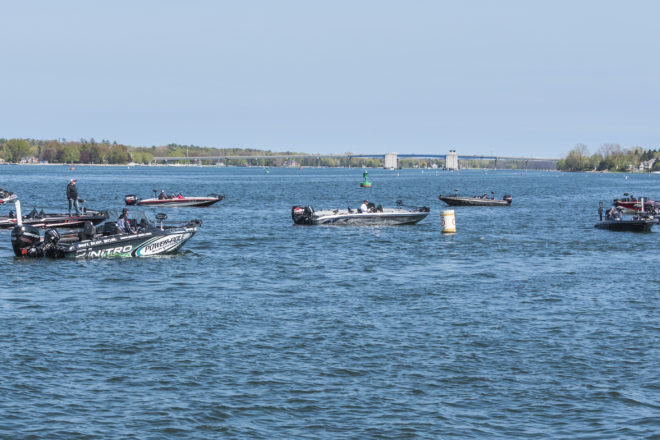 Not everyone’s a fan, but there’s no denying that bass-fishing tournaments have played a huge role in putting Sturgeon Bay on the map as a world-class smallmouth fishery. And this week, the area has the potential to lure even more visiting anglers when the Major League Fishing Bass Pro Tour and 80 of the top bass fishers in the country knock on the Door.

Watch the event live on MajorLeagueFishing.com or the MLF app before it’s produced for television on the Discovery Channel. Livestreams will begin at 7:45 am each day, July 10-15. Forty anglers will compete daily during the first four days. The field will then be cut in half, and by day six, only 10 competitors will remain.

Longtime guides Gary Nault and Dale Stroschein say smallmouth catches have really heated up during recent weeks, and both expect to see plenty of three- to five-pound-plus bass captured.

Competitors will launch from Sawyer Park and may fish all the waters of Green Bay within Wisconsin, as well as the lake side of the peninsula.

Check out the season leaders and all of the other participating anglers at majorleaguefishing.com.

The Quality Deer Management Association (QDMA) and the National Deer Alliance (NDA) are merging into a single group. Nick Pinizzotto, NDA president and CEO, will lead the new group. The organization’s name and structure are expected to be in place before the fall hunting season.

Pinizzotto said the COVID-19 pandemic has hit many organizations hard, but that reality creates an opportunity to become laser-focused on delivering a mission that serves deer, hunters and the industry effectively and efficiently.

Following QDMA’s North American Deer Summit in 2014, QDMA formed NDA. Unification will end duplication of effort and create room for adaptation to the changed landscape of fundraising and wildlife conservation.

“President Ronald Reagan once said, ‘There is no limit to the amount of good you can do if you don’t care who gets credit,’” said Rick Dahl, QDMA board chair.

Speaking of deer groups, Whitetails Unlimited has also been hit hard by the pandemic. Check out a list of rescheduled banquets and “deer camps” at whitetailsunlimited.com/events/banquets.

Duck Stamps Are on Sale

The new 2020-21 federal duck stamp is now available for $25. Purchased by millions of waterfowl hunters, wildlife enthusiasts and stamp collectors every year, duck stamps provide critical funding to purchase and protect wetlands and associated habitat for ducks, geese and other wildlife species.

Ding Darling sketched the first duck stamp in 1934. Since then, the program has raised more than $1 billion to help acquire and protect more than 6 million acres of habitat in the National Wildlife Refuge System. Of every dollar spent on the stamp, 98 cents goes directly to acquiring and protecting waterfowl habitat.

Waterfowl hunters age 16 and older are required to purchase and carry a duck stamp while hunting. It also provides free admission to National Wildlife Refuges that are open to the public. Wildlife watchers who realize the value that wetlands provide to hundreds of species can also contribute.

The stamps are available at post offices, and electronic versions can be purchased online.

Hot temperatures and an often calm lake during the past two weeks have increased evaporation, but that has been offset by sporadic heavy rains over parts of Lake Superior and Lake Michigan.