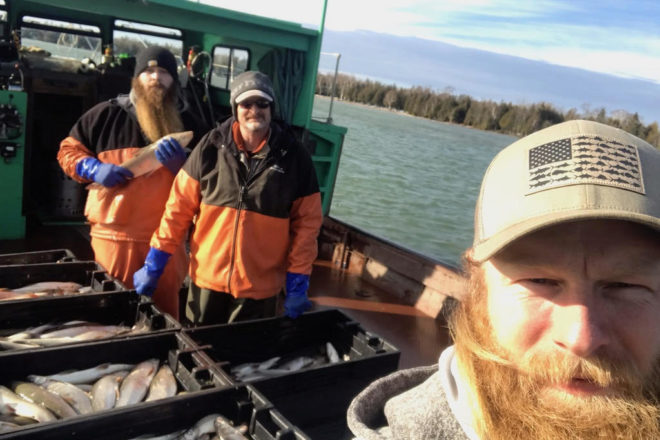 Whitefish populations have dropped in Lake Michigan but have exploded in Green Bay, offering excellent opportunities for both sport and commercial anglers. Will Henriksen (right) shared a selfie with John Koessl (left) and Chip Dickelman (center) after a solid haul. Photo courtesy of Henriksen Fisheries.

There are no entry fees and plenty of prizes for kids who take part in the 35th annual Kids Fishing Derby at Little Lake in Sturgeon Bay next Sunday – Father’s Day.

Although it’s not an official event this year because of continuing concerns about large gatherings, Gary and Cheryl Nault are inviting families to participate using a new format June 21, 11 am – 2 pm.

Kids who are fishing are asked to remain at least six feet apart unless they’re from the same household. If they catch a fish, text a picture to 920.495.6551 or 920.495.6552. Include a ruler in the photo to show the measurement if possible, and include the angler’s name, address, phone number and age.

All photos must be received before 2 pm. Be creative with the photos because there will be trophies for the best fish pictures. Prizes will be awarded curbside at Sunset Park.

A new rule could adjust the total commercial harvest of whitefish in Lake Michigan to protect certain stocks from overharvest while adjusting the current fishing-zone boundaries and allocation scheme to allow commercial fishers to better utilize a booming Green Bay population.

Public comments were allowed on a change to whitefish quotas, the gear used, commercial fishing zones and standardization of commercial harvest reporting requirements.

Brad Eggold, DNR Great Lakes District fisheries supervisor, said that if the scope statement is approved, the DNR will work with commercial and sport fishers, the Lake Michigan Commercial Fishing Board and the public on any future regulation changes related to lake whitefish management or reporting requirements.

Commercial fisher Charlie Henriksen of Sister Bay said the DNR’s whitefish stock assessment model is showing what netters have been saying for at least five years.

“There’s a tremendous amount of whitefish in the bay,” Henriksen said. “The harvestable surplus could be more than a million pounds, and that could be split between commercial and sport fishermen.”

Sport and commercial anglers, boaters and others interested in double-crested cormorants can comment on a draft rule that would allow state management, with restrictions.

The U.S. Fish and Wildlife Service published the rule June 5 and will accept public comments until July 20.

The new permit would authorize specific take activities that are normally prohibited to relieve or prevent impacts from cormorants on wild and stocked fish, aquaculture facilities, human health and safety, state property and assets, and threatened and endangered species.

Learn more at regulations.gov. Follow the instructions for submitting comments to Docket No. FWS-HQ-MB-2019-0103.

Why did the turtle cross the road? Most likely to lay eggs or return from upland habitat to wetlands after doing just that.

Many of Wisconsin’s 11 species of turtles are declining. Getting run over by vehicles and having their nests preyed upon by raccoons, skunks and coyotes are part of the reason why.

DNR biologists are asking the public to report turtle crossings. Since 2012, the public has provided 2,903 crossing-location reports, with nearly 1,000 identified in 2019 alone.

Citizens have reported dozens of previously undocumented populations of ornate box turtles, wood turtles and Blanding’s turtles, which are listed as endangered, threatened or of special concern, respectively, in Wisconsin. Learn more at wiatri.net/inventory/witurtles.

State of the Great Lakes

The U.S. Environmental Protection Agency and Environment and Climate Change Canada have released the “2019 State of the Great Lakes” report. Read it at binational.net/category/a10/sogl-edgl. More than 180 government and nongovernment Great Lakes scientists and other experts worked to assemble available data and prepare the report.

Researchers at UW-Madison have developed a mobile app that allows users to track infestations, identify ticks and learn more about the diseases they transmit. It’s available free through Google Play and the App Store.

As of June 5, Lake Michigan was seven inches higher than last year and five inches above the previous record, set in 1986.