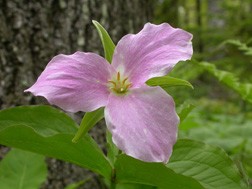 White Trillium showing its pink color as it ages. Photo by Roy Lukes.

Even though my wife Charlotte and I are primarily stay-at-home people, there comes a time in late spring and early summer when we enjoy exploring and enjoying good wildflower and bird habitats. Fortunately many outstanding sites exist in Door County from bay to lake in its preserves, sanctuaries, town, county and state parks. Especially wonderful is that the wildflower season is extended, occurring a week to two weeks earlier at the higher sites along the bay, then gradually peaking later in the lower areas along the cooler lake.

Our official county wildflower, the Large Yellow Lady’s-slipper Orchid, can be seen in full bloom over a period of roughly six weeks. We were thrilled to see many hundreds in all stages of flowering at the Ellison Bluff County Park May 29. There have been times when we could find them still in perfect condition along cooler trails during the first and second weeks of July at The Ridges Sanctuary near Baileys Harbor.

We consider the Large-flowered Trillium display throughout the county this year the finest we’ve seen over the past 39 years. Here too is another wildflower with a nicely extended flowering period. The cooler weather this spring helped to produce the largest specimens and the longest bloom of these great favorites in our woods we’ve ever observed. Just now many are starting to show their gradual change from white to pink. 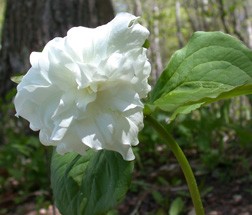 Frederick Case had this to say about the species in the incredibly wonderful book, Trilliums, that he and his wife, Roberta, wrote: “This species, the most showy, best known and loved of all the Trilliums, is the provincial flower of Ontario, Canada, and, in European gardens, one of the most highly prized woodland or shade flowers. No other Trillium can match this species’ abundance and flowering spectacle as it occurs in the heart of its range.” Lucky for us in Door County, this great favorite lies within the western part of the heart of its range.

During our hike in the woods along the Ellison Bay Bluffs we were especially attracted to those Trilliums having changed to their lovely delicate pink stage. I was immediately reminded of the dazzling colored photo of a cluster of the pink form of the Large-flowered Trillium, Trillium grandiflorum, form roseum, shown on the dust cover of Case’s book, which includes stunning colored photos of all the 43 Trillium species in North America. This rare pink form of the Large-flowered Trillium is known to grow especially in the Blue Ridge Mountains. In light of our white Trilliums gradually turning pink as they age, it would be neat if the rare pink form would gradually turn white as they age! 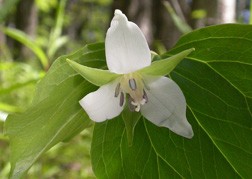 Nodding Trillium with its blossom hidden under the leaves. Photo by Roy Lukes.

The Trillium genus is noted for its many abnormal and mutant forms. One absolutely gorgeous form is referred to as the double or multi-petaled Large-flowered Trillium, highly sought after by Trillium collectors. Most often this unusual form is perennial as are the regular white Trilliums we see each spring. Occasionally one comes across a white Trillium having a green stripe down the middle of each of the three petals. These plants are referred to as mycoplasma-infected Trilliums and usually die within a year or two after their first blossoming. More than one botanist in the past has unsuccessfully attempted to have their “exciting” find of the green-striped blossom declared a brand new species.

The only other Trillium species I know of that grows in our county is the Nodding Trillium, Trillium cernuum (SERN-you-um). The best sites I know of are in low, cool, moist to swampy woodlands containing both conifers and deciduous trees. Cernuum means nodding, and indeed the blossoms hang downward, often concealed by the rather short, wide, horizontally-growing leaves. The plants we see here are usually up to a foot tall.

The tiny, early-blooming Snow Trillium may grow in Door County but to date we’ve not found it. We used to go to a Brown County park but that site has become so intolerably overgrown with Prickly Ash that one practically needs a suit of armor to get through those miserable plants. 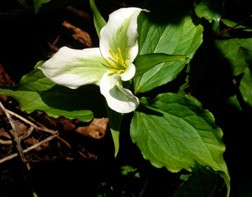 The unusual green and white petals of this trillium are caused by a mycoplasma infection. Photo by Roy Lukes.

The other species of Trillium native to Wisconsin we’ve seen in extreme southern counties is the Red or Reflexed Trillium, Trillium recurvatum. Two fascinating Trillium species we’ve enjoyed at the Great Smoky Mountain National Park are the Yellow Trillium, with upright petals, Trillium luteum, and a strikingly red one, Trillium erectum, referred to as “Stinking Benjamin” because of its blossom odor resembling a wet dog.

Another highly unusual and beautiful Trillium species we enjoyed, the Deceptive or Deceiving Trillium, was seen and photographed in early April at one of our all-time favorite wildflower meccas, Calloway Gardens near Pine Mountain in western Georgia.

The Trillium genus, with its 43 species native to the United States, has to rank among the truly most colorful, widespread, amazing and variable groups of plants in the world. Our masses of the Large-flowered beauties offer good reason to spend more time in the woods now.