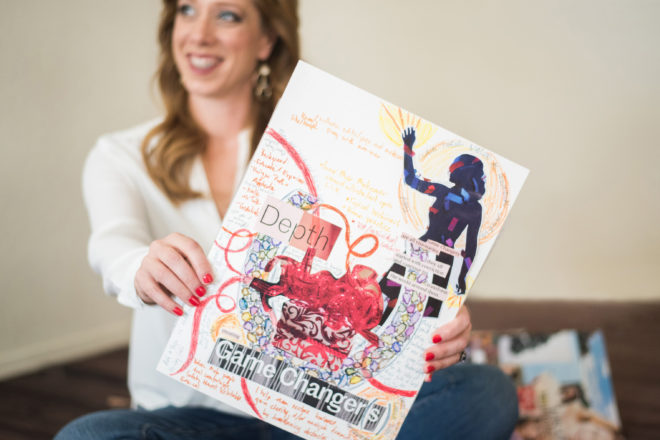 Participants in the Money Mindset Makeover will use collage, writing and more to achieve game-changing results.

Her upcoming workshop, Money Mindset Makeover, facilitates that self-discovery through discussion and creative exercises. In the process, participants can uncover their “money mindset”: the way they think and feel about money, including how they are influenced by their family, friends, social-media feed and the larger culture.

According to art therapist and workshop co-facilitator Jodi Rose, art helps participants work through the complex emotions surrounding money. In one project, participants make a collage of ideas about money that other people have imposed on them. In another, they visualize their inner critic, and in another, they express what success looks like for them.

Everyone has a different relationship with money, Boden said. Some people shop when they’re stressed; others struggle to prioritize needs and wants; and others aren’t aware of how their small expenses add up. But most participants, she said, have one thing in common: They have never deliberately considered their money mindset until they were encouraged to do so during the workshop.

“What our workshop does is, it kind of makes you sit back to reevaluate all the stuff that you’re being bombarded with,” Boden said.

Throughout her three years of facilitating the workshop, she has seen many participants have revelations – not just about their financial situations, but about other aspects of their lives as well, from past traumas to current unhealthy relationships. And Rose has seen the same: “Over half the people who’ve taken it have said it’s life changing,” she said.

Although examining the psychological aspect of financial health is a crucial part of the workshop, participants are also introduced to and given time to work on practical skills, from making realistic budgets to figuring out how much expenses such as utilities should cost in the area.

“It’s really easy to just look at our bank statements,” Boden said, but this workshop is about “really digging deeper, looking at all the month-to-month stuff.”

Not everyone who would benefit from such a class can afford the $125 registration fee, so Money Management Counselors, in conjunction with the Women’s Fund of Door County, offers a scholarship to cover the class cost.

Throughout the workshop, Boden emphasizes that wealth is not about having a lot of money. Instead, it’s about having options, because “all of our decisions we make, whether we like to think about it or not, are wrapped around finances,” she said.