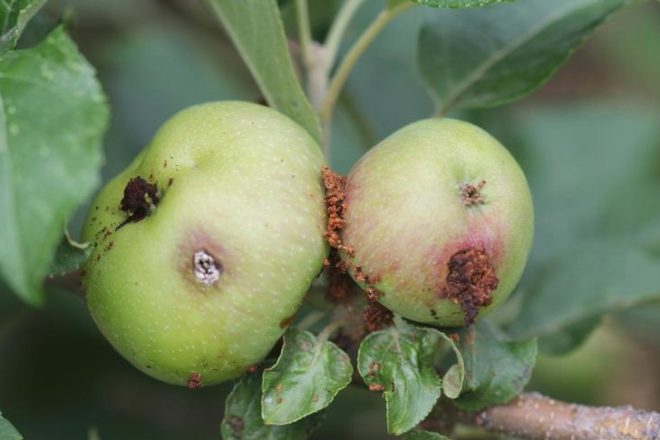 You may have heard the joke, “What’s worse than finding a worm in your apple? Finding half a worm!”

The “worms” referred to in that joke are not in fact worms, but the immature stage of either a beetle, fly or moth. Around here, three common insects that can infest a backyard apple tree are plum curculio (a weevil), apple maggot (a fly) or the codling moth. If the image that comes to mind when you think of a wormy apple is masses of brown, granular material coming out of a large hole on the side of an apple, then you likely are thinking about codling moth damage.

In Door County, the large number of abandoned orchards results in higher codling moth populations, since they are able to reproduce unchecked in those locations.

The codling moth, Cydia pomonella (Lepidoptera: Tortricidae), is one of the most damaging apple pests nationwide. The adult moths are about one-third of an inch long, grayish-brown with light and dark bands in their middle section and bronze coloration near the wing tips. The immatures (caterpillars) can reach up to half an inch long, and have dark heads with pinkish-white bodies. The caterpillars are responsible for the large, dark tunnels through the fruit and for pushing the noticeable dark brown frass (waste), back out the entry hole on the surface of the apple. Codling moths spend the winter as a mature caterpillar and pupates (transforms) into the adult moth mid-May.

While you may not think about damaged apples until harvest, managing this pest is a yearlong process. For a backyard orchard, the most important thing you can do is sanitation: removing all fallen apples and destroying them. Also, if caterpillars were present in apples that were stored, they may have left the fruit and hibernated for the winter on the storage crate or around the building. Cocoons that are found should also be destroyed. Pruning the apple trees during the late winter helps increase airflow throughout the canopy, which could help make the environment slightly less favorable for the moths.

Beyond that, the rest of the management decision-making process depends on your goals and how much you want to invest into the process.

Questions to ask yourself are:

The answer to these questions will help guide what you do next. For a backyard orchard, the main option for control includes bagging individual apples or using an insecticide. Mating disruption is commonly used in large orchards to control codling moth, but it is not effective in orchards less than five acres.

Bagging individual apples with a fine mesh net prevents the moths from laying eggs on the fruit. The bags need to be securely tied to the stem of the tree after the flowers have been pollinated, but you should leave room in the bag for fruit development. The bags can then be removed a couple weeks before harvest to allow the apples to color.

If you choose to use an insecticide, make sure that it is registered for use on apple trees and will target codling moth. Timing of the application is critical since the caterpillars are only unprotected for a short period of time until they enter the fruit. Follow all label recommendations regarding application rate, timing, number of allowed applications, personal protective equipment, and the pre-harvest interval (the amount of time from the last application until harvest). 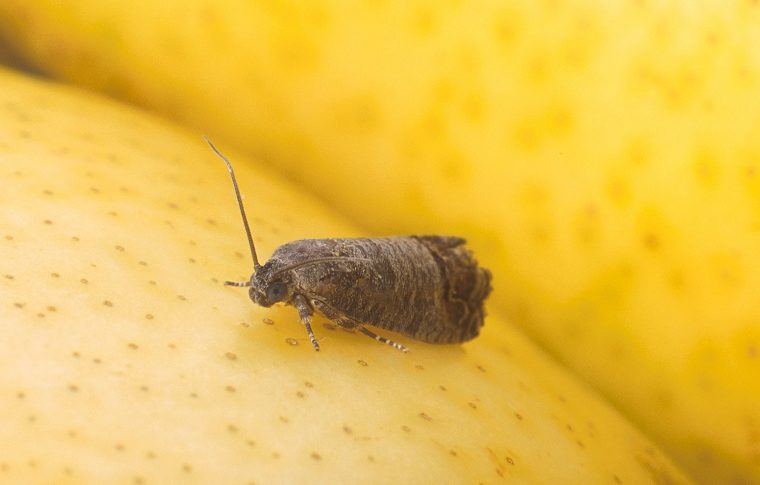 To determine when to apply an insecticide, pheromone-baited traps can be used to catch the adult moths so you can calculate the predicted time of egg hatch. Often the eggs begin to hatch around the time that all the petals have fallen off the tree, so the first insecticide application should be about 10-14 days later.

Do not spray insecticides during bloom to protect pollinators.

A second application in late July through early August will typically allow for sufficient control. If there is heavy insect pressure, and you are finding a number of damaged apples with frass, insecticide applications about two weeks after each of the previous two applications may be warranted. Insecticides containing the active ingredient carbaryl should be avoided to prevent fruit drop.

If you do notice some wormy apples on your tree this fall, they are fine to eat, just cut them up to avoid the damaged areas. And even if you take an unfortunate bite while not looking, I suppose that a little extra protein can’t hurt.