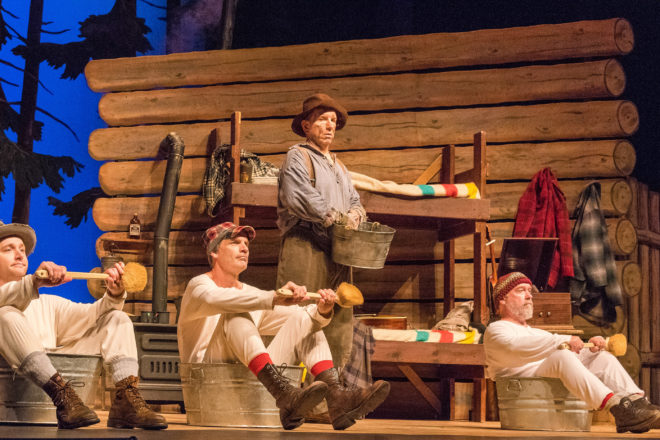 Doug Mancheski’s 20th season with Northern Sky Theater will be jam-packed, as the actor is cast in all four of the company’s summer shows.

Mancheski spent four weeks in rehearsals to prepare for his performances. The actor is well known for quickly memorizing lines. While he has never forgotten dialogue, he has gotten caught up on lyrics. On the opening night of Loose Lips Sink Ships, Mancheski went blank during a love song where he was wooing actress Laurie Flanigan.

“So I repeated ‘la la la’ several times,” he recalled. “Thank heavens it was a light moment in the show and the audience found it very amusing. But it can make one’s heart stop for an instant.”

Now Mancheski reviews lyrics before he goes onstage. His pre-show routine is focused on preparedness and relaxation. On occasion, to relieve himself of any jitters, he even takes a run in the park.

But there are sometimes problems that you can’t prepare for or avoid. While attempting a split in Lumberjacks in Love, Mancheski once tore his hamstring.

“It was painful to continue the show,” he said.

But that, he argues, is not the most difficult problem to overcome.

“By far, the worst is when you’re losing your voice,” he said. “One performance of Guys On Ice, my voice was such that I could only speak-whisper the lyrics to the songs. That was excruciating.”

These minor and major complications are rare. The most frequent problem with open-air theater is rainy weather. But that, Mancheski said, doesn’t seem to faze audiences.

“Door County audiences are the best in the world. Rain or shine, they bring that positive energy to the theater. It’s just hard to be in a bad mood in Door County for them.”

Mancheski began his season on June 15, playing the role of Hank Bumpkin in the world premiere of Doctor! Doctor! In addition to this new role, he will be reprising an old favorite – for actor and audience alike – as “Dirty Bob” in the coinciding 20th anniversary of Lumberjacks in Love.

“Dirty Bob in Lumberjacks in Love has a special place in my heart because I performed the role my first summer at Northern Sky in 1997,” Mancheski said. “And it is with great fondness to remember Fred Alley’s glee at his work coming to life. He was very proud of that show, and for good reason.”

The late Fred Alley, one of Northern Sky’s founders and the writer of many of the company’s classic shows, recruited Mancheski to what would become Door Shakespeare and then on to Northern Sky after seeing him in a performance of Frankenstein at the Door Community Auditorium. Mancheski remembers the man fondly.

“Fred Alley always was my biggest fan. And vice versa. One of my special memories of him is his ‘the show must go on’ mentality. One performance of Tongue ‘N Cheek had to be stopped mid-show because of rain, but he gathered the drenched audience backstage under a few trees and we performed the remainder of the show. He was one-of-a-kind.”

“The theater has grown by leaps and bounds, the audiences are much larger, and we no longer share a dressing room with the lighting equipment. And I don’t have to take a dip in Nicolet Bay after a show to cool down,” Mancheski said.

Mancheski has also noticed some constants throughout his career.

“Special moments with Northern Sky have been audience members who were children when I first acted with Northern Sky and are now adults,” he stated. “And they’ve come to the theater all those years. It’s almost like family to have sustained a relationship to an audience base for that long. And now they’ll probably bring their children to see Dirty Bob. That warms my heart. And makes me feel old.”

“That is the glue to this company and is what keeps audiences coming back and beckons new ones to join,” said Mancheski.