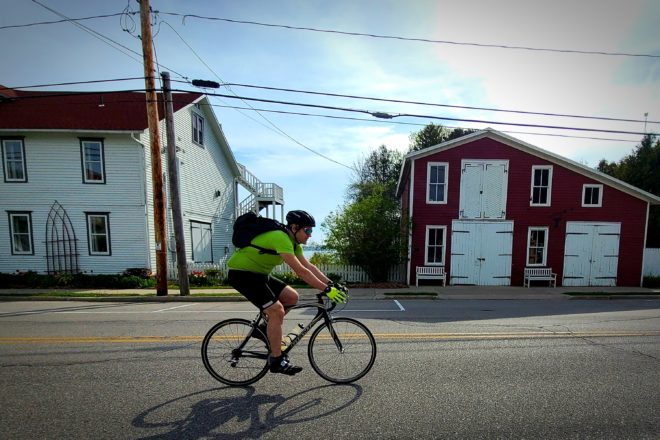 After a hiatus of several years, Nate Bell returned to biking during the COVID-19 pandemic and hasn’t turned back. Since his first ride of the 2021 season on March 15, Bell has logged more than 1,140 miles during his 53 commutes to work. Photo by Sara Rae Lancaster.

Being stuck at home during the COVID-19 pandemic gave many people more downtime than ever before. Some used that time to improve their cooking skills. Others baked. Some covered their dining room table in jigsaw puzzles.

And then there were those who used the time to look inward and take inventory of the status quo. Nate Bell fell into that latter category. In the middle of dealing with the pandemic, he was also dealing with a divorce.

“I needed to totally reevaluate everything in my life,” he said.

That included his exercise routine. First, he tried a return to running, an activity he’d enjoyed in his 20s.

“But my knees were not having it,”  Bell said. “So I looked for another outlet.”

He settled on cycling and purchased a used 2004 Giant TCR 10-speed from a coworker.

The expression “It’s just like riding a bike” held true. Bell quickly fell into a groove, making his bike rides a part of his daily routine. About a month in, he realized he could also incorporate his rides into another part of his day: his commute to work.

“At that point, I started biking more frequently,” he said.

Bell’s commute to work at Door County Broadband in Baileys Harbor from his home in Sister Bay is 11.67 miles, and it features a scenic, backroads tour.

“The direct route is down [Highway] 57, but that would be insane to bike down,” he said. “So I make a round trip of it and come back via County Q.”

He extends his return route to 12.9 miles, opting for the long way home.

The only time he doesn’t commute by bike is if he needs to travel to Sturgeon Bay after work or if the weather is bad. Since getting back on the bike a year ago, Bell has logged 4,605 miles outdoors and an additional 1,438 miles indoors during the off-season.

“My bike would not fare well in the salt on the road and lack of traction,” said Bell, who rode until Dec. 17, 2020, before taking a break for the winter. He plans to get another bike that will extend his outdoor riding season.

“There will likely be days I’m not able to [ride] in the winter, but I want that to be as few as possible,” he said.

There are other tools he relies on as well – accoutrements that had little or no meaning to him 18 months ago that he can’t imagine being without now. Although the need for certain tools and gear depends heavily on distance and the situation, Bell has a few must-have favorites.

“A bike jersey [is] super helpful,” he said, “but for shorter distances, you can just wear normal clothes.”

When commuting to work, he keeps his clothes for the day in his backpack and a pair of shoes at work. Also in his backpack: tire levers, a multi-tool and a spare inner tube.

“That multi-tool saved me big time a couple weeks ago when my chain broke,” Bell said. “I also have my phone with me. YouTube is a great resource when you have a mechanical issue [on the road].”

The bike itself is equipped with two headlights and two tail flashers.

“When you start biking, it does improve your health, but it also increases your chances of having a serious accident,” Bell said.

Safety on the road is something he thinks about – and practices – but he believes the benefits of cycling outweigh the risks.

“I think the actual danger isn’t as great as the perceived danger,” Bell said. “Right now, commuting to work makes me an outlier, and until there is better infrastructure, that will be the case.”

What started as a coping-mechanism-turned-passion is now evolving into a mission for Bell: to make cycling more accessible throughout Door County.

“To say [cycling] changed my perspective would be an understatement,” he said.

For 2021, he decided to make cycling his default mode of transportation whenever possible. In the process, he hopes to get more people on board.

“I know we need cars, but I want there to be a day when you don’t have to be semi-crazy to bike to work or between towns and villages,” said Bell, who is also on the Sister Bay Village Board and Plan Commission. “Biking in Door County is harder than it should be. But I – and many others – are working on that.”

While he does, he encourages others to dust off that 10-speed that’s sitting in the back of the garage and go for a ride.

“Starting is the hardest part,” Bell said. “You can do more than you realize, [but] if you don’t try, you never will.”

BIKING BY THE NUMBERS

51: The number of times Bell commuted via bike

53: The number of times Bell has commuted by bike

18: the number of minutes Bell’s commute takes via car

44: the number of minutes Bell’s commute takes via bike (plus or minus a few minutes, depending on the wind)

“On my way in, I go up a rather large hill on Settlement Road, about a half mile from [Highway] 57. I use that hill as a reminder that you can get through anything and put it behind you.

“This morning, near the top, my chain broke. This is not a common occurrence in cycling, but it does happen. I had a multi-tool that had some sort of chain tool I had never used, so I sat down in the gravel, took my gloves off, and fired up my iPhone to watch a video on how to repair a bike chain. Pedaling again, I put that hill behind me yet again, even after it did its best to stop me.