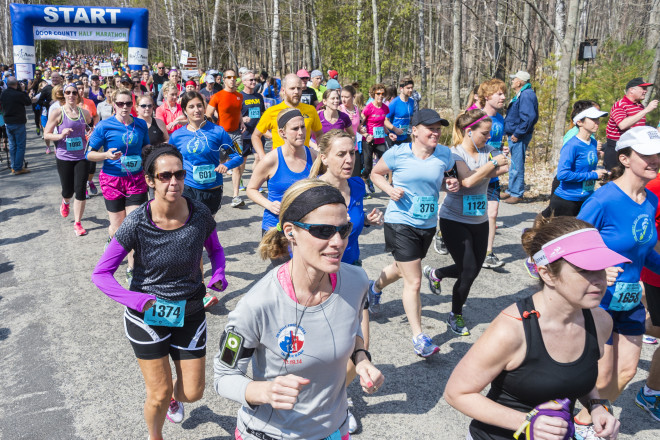 The Door County Half Marathon and Nicolet Bay 5k welcomes more than 2,600 runners to Peninsula State Park each May. Photo by Len Villano.

The ninth edition of the Door County Half Marathon and Nicolet Bay 5k filled to capacity on April 23.

The race – hailed as one of the best in the Midwest by Runner’s World, Competitor magazine and a host of running writers – will welcome more than 1,800 runners in the half marathon and another 700 in the Nicolet Bay 5k for a run in Peninsula State Park.

This year’s race features 10 very special competitors from MyTEAM TRIUMPH, a nonprofit organization that pairs handicapped competitors with “angels” who push them in specialized wheelchairs to the finish line.

An additional 17 runners are taking part in the Run For A Cause Program, which has raised more than $110,000 for charity since it started six years ago.

“There’s a special kind of chill you get when you see these runners cross the finish line,” says assistant race director Myles Dannhausen Jr. “Whether someone is running for charity, to prove something to themselves, or in memory of a loved one, you can see on their faces what it means to them. I’m thrilled to be a part of giving them that opportunity.”

More than 90 percent of race participants and their families come from outside Door County, with 45 percent of them staying in a hotel or B&B.

“That makes a huge economic impact in the county on a weekend when rooms were empty the year before the race began,” Dannhausen says. “But even more gratifying is that nearly 10 percent of our runners have never been to Door County before, and we get to introduce them by taking them to the park I consider the best place on the peninsula, creating lifelong visitors.”

The Fish Creek entrance to Peninsula State Park will be closed at 9 am on race day and access to some park roads will be limited until the race ends at 1:30 pm. The Nicolet Bay Boat Launch will not be accessible from 8:30 am till 2 pm.