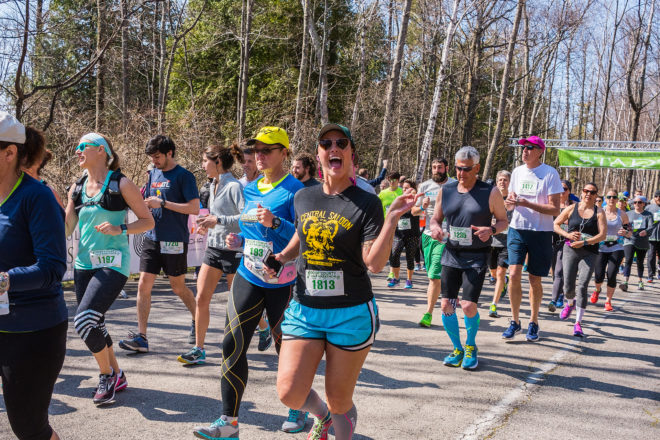 Door County fashion will have a new look this weekend when more than 2,300 runners funnel up the peninsula to run the 12th annual Door County Half Marathon and Nicolet Bay 5K in Peninsula State Park.

“More than 90 percent of our runners come from outside Door County,” said course director Myles Dannhausen Jr. “Most of these folks bring their families and friends and stay in hotels, campgrounds and vacation rental properties – that’s a huge impact in lodging dollars alone.”

But those runners also flood restaurants, stores, gas stations and gift shops. On race day alone, participants contribute an additional $8,000 in entry fees at Peninsula State Park over what the park would normally take in during the first weekend of May. Dannhausen said post-race surveys show that between 100 and 200 runners each year are making their first visit to the county, laying the foundation for years of future visits.

“We’re extremely proud of the impact this event brings to our community,” said race founder David Eliot. “This is what we set out to do when we launched the event in 2008. We wanted to create something that brought our community together and got people excited for the beginning of the season.”

The race has generated hundreds of thousands of dollars for local charities, including more than $179,000 raised by runners through the Run For A Cause program. Runners who raise $250 for a charity get a free race entry to the half marathon or the 5K.

10 am: Door County Half Marathon

The Peninsula Pulse is presenting sponsor of the Door County Half Marathon and Nicolet Bay 5K.