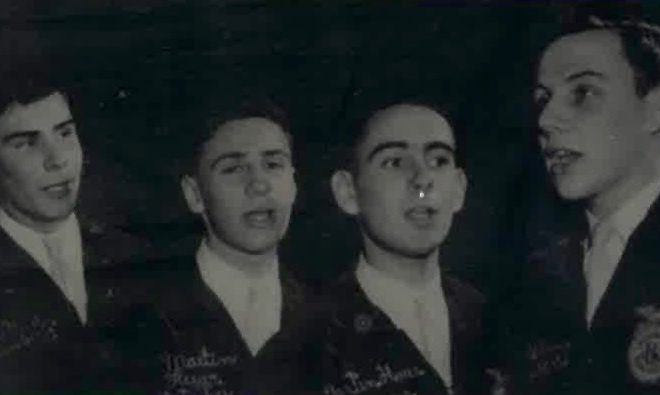 When Hans Feld was a seventh grader in Algoma in 1947, his older brother, Bernie, took him along to Sturgeon Bay to a rehearsal of a chorus that had about 40 members. Hans had a good voice and enjoyed being part of the adult group for a time, including some experience with singing in a quartet.

Fast forward to February 1952, Hans’ senior year at Algoma High School. He was looking for an easy class to finish out the year and approached the agriculture teacher/Future Farmers of America advisor, Roy Koff, about enrolling in ag shop. Koff, obviously no pushover, said, “Oh, all you want is an easy class. You’re not going to get it.”

However, Koff either remembered or was clued in by someone that Feld could sing, because he stopped the boy in the hall the next day and said, “OK, you can take shop on two conditions: first, you quit the varsity basketball team and join the FFA basketball team; and second, you form an FFA quartet to compete in the district contest next fall.” 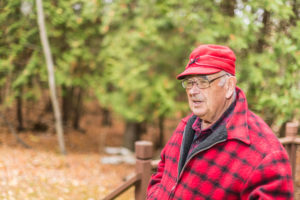 “I loved basketball,” recalled Feld, “but I was five feet, four inches tall. I was sitting on the bench in varsity games, and I figured I’d be a starter on the FFA team, so that wasn’t a hard decision. However, I was reminded of the other part of the bargain a few days later, when Koff asked, ‘How’s that quartet coming along?’ And I said, ‘Uh, we’re starting rehearsals on Monday.’

“We had a basketball game that night, and in the huddle, I said, ‘Guys, I’ve got a problem.’ It so happened that three of the other boys in the huddle were Dick Cornette, Marty Heuer and Don Tebon. All three of them had also been part of that adult singing group in Sturgeon Bay, and they said, ‘Sure, we’ll help you out.’

“I had let Mary Ann Murphy, the school’s wonderful choral director, know that I needed to form a quartet. So on Monday, the four of us presented ourselves to her.  ‘Where’s the rest of the guys for tryouts?’ she asked. As it happened, Dick sang bass, Marty was a baritone, I sang top tenor and Don carried the lead, so that worked out OK. We learned three songs – ‘Stout Hearted Men’ and a couple of other semi-classical things before the district contest in Brussels, and we won.”

Before the sectional competition in Shawano, the quartet switched to barbershop style, singing acapella. They won that contest, too, and the next one – the state competition, held in Green Lake at the Baptist Assembly Hall (now the Green Lake Conference Center).

Their next stop, the fall after they graduated, was the National FFA Convention in Kansas City, where the quartet expected to participate in a final competition. “Koff had a new 1951 Ford,” Hans said. “He and his wife, Eileen, rode in the front and we four boys in the back. None of us had ever been in a big city, and the thought of singing in front of thousands of people made us really nervous.

“But when we got there, we found there wasn’t a competition. We were to sing in the national chorus, composed of FFA boys who had won singing contests all over the country. However, when the director found out that we were a barbershop quartet, he invited us to sing three nights. He might have let us sing more, but we still knew just three songs.”

Soon after that, all four boys were in military service. Marty Heuer was a career man in the Air Force, retiring as a lieutenant colonel. He now lives in Tampa, Fla. Dick Cornette, who headed maintenance for Briggs & Stratton in Milwaukee, recently moved back to Door County. Don Tebon worked as a salesman and lives in Wales, Wis., near Milwaukee. Feld worked for Production Credit and Baylake Bank for many years. 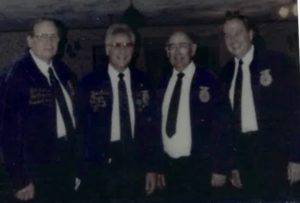 In 1993, 41 years after their “glory days,” Koff invited the quartet to get together again to perform when he and Eileen celebrated their 50th wedding anniversary at Slovan Country Inn, west of Algoma.

“We decided it would be special to wear our old FFA jackets,” Feld said, “even though none of us were as slim as when we all fit in the back seat of that ’51 Ford. The only parts of my uniform that fit were the necktie and the handkerchief.”

At the anniversary party, the quartet sang their award-winning high school repertoire — “Coney Island Baby,” “My Evaline,” and “Ain’t  That A Shame.” Next came 19 verses composed by Heuer and his wife, Rita, to commemorate events in the Koffs’ life and sung to the tune of “Goodnight Irene.” They closed with Roy Rogers’ “Happy Anniversary,” with an extra verse composed by the quartet.

Mary Ann Murphy, the long-ago choir director, told them she was surprised that they sounded as good as they did in 1952. “However,” Hans said, “she went on to say, ‘Of course, you weren’t that great then!’”

Shared memories create a bond that lasts a lifetime. Since that anniversary party in 1993, the quartet has continued to get together every year in October. And 71 years after four seventh graders from Algoma joined an adult choir in Sturgeon Bay, four old friends in their mid-80s are still harmonizing.