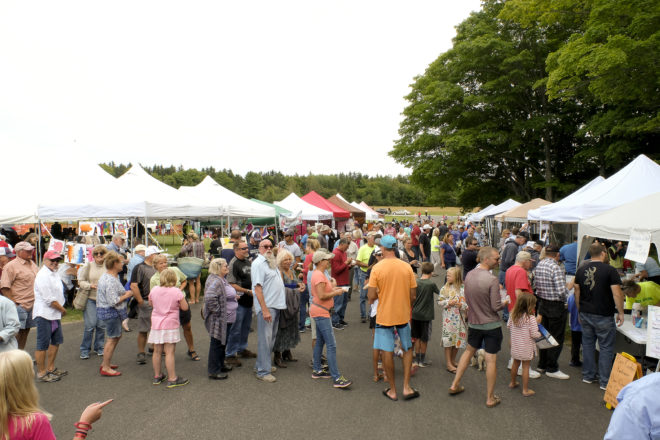 Some of the nation’s best professional barbeque teams will compete in the eighth annual Death’s Door BBQ, a Kansas City Barbeque Society (KCBS)-sanctioned event, on Aug. 24 at the Washington Island Airport. The event is open to the public 10 am – 5 pm.

This year’s event features $18,000 in prize money, and competitors include three of the top 10 teams on KCBS’s 2018 roster. Some Wisconsin teams are strong challengers for the grand champion title, including Mark Piturna’s Crash Test Smokers of Wrightstown, Tom and Becky McIntosh from Sturgeon Bay, and Chef’s Gone Grillin’ and Tim’s Full Belli Deli, both based in Appleton.

The Kids’ Que (kids’ barbeque event) will start at 2 pm in front of the airport office. Two age groups – 7-12 and 13-18 – of future chefs will prepare their best burgers and pork chops. Register at deathsdoorbbq.com.

On Aug. 23, the event’s first Steak Cookoff (sanctioned by the Steak Cookoff Association, or SCA) will also be held at the Washington Island Airport. Think you cook a great steak? Here’s your chance to challenge some of the best local cooks for prize money, awards and bragging rights. Enter at steakcookoffs.com. Steak selection is at 2:30 pm; awards will be presented at 7:30 pm. The Steak Cookoff winner will earn an invitation to the SCA World Championship in Fort Worth, Texas, and will have a chance to win $10,000 in prize money.