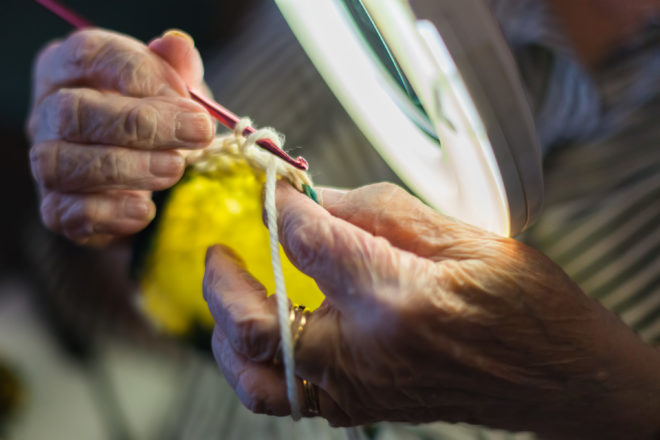 Betty Whipple, a 91-year-old resident of the Skilled Nursing Facility at Door County Medical Center, says she doesn’t go any place anymore. But the items she crochets by the dozen are spreading warmth throughout Door County.

Betty was born in Escanaba, but her family moved to Sturgeon Bay when her father got work in the shipyards during World War II. She’s never left.

“You bet your life,” she said. “Door County is a great place to live.” 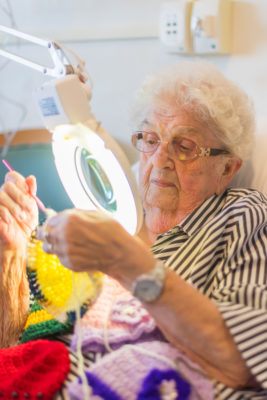 When she was just a little girl, Betty learned to chain stitch from her mother. Before long, she realized she had a special knack for reading crochet patterns, and was soon teaching her mother.

Betty kept on crocheting and, especially, knitting after she married Roy Whipple, a mason by trade, who worked in the shipyards. They raised six children: daughters Rebecca, twins Rachelle and Celeste, and sons Jeffrey, Phillip and the late Richard. All but Celeste still live in Door County. When the children were young, Betty kept them in sweaters and other garments.

As the children grew older, Betty had more time for artistic crocheting. In the era when sofas often sported matching crocheted pieces on the backs and arms, she created two sets she still remembers fondly – one of a horse with a wreath of roses around its neck and the other picturing a pair of swans.

“After a while, they weren’t popular anymore, so they hung in a closet for a long time, until I gave them to two of my granddaughters,” she said. (She has a dozen grandchildren and, so far, nine great-grandchildren.)

These days, Betty no longer knits, and she crochets more practical, but still lovely, items – hats and headbands for both children and adults. “If I’m not sleeping,” she said, “I’m crocheting – but I do go to bed early.”

It takes Betty just a day and half and a seven-ounce skein of yarn to turn out a warm hat. Last year she created 20 of them for Sunrise School in Sturgeon Bay, 20 for the Southern Door School District and 27 hats and headbands for the Boys & Girls Club of Door County. 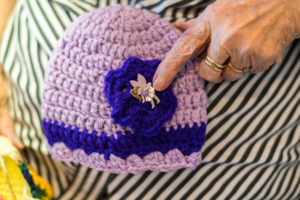 “I like to put something extra, little frills, on the ones for girls,” she said.

Before Christmas, someone asked Betty if she’d like to crochet some headbands to hang on the tree downstairs in the hospital. The sample she was shown – “This is how we do them” – was quite plain.

Her projects in the new year include hats for patients in the hospital’s Cancer Center and afghans and tiny hats for the layettes assembled for newborns by the Christ Child Society.

Betty’s productivity is even more amazing since she’s legally blind in one eye. She isn’t able to read anymore. “Just too nerve wracking to try,” she said.

That’s also why she had to give up knitting. For the past five years her macular degeneration has been treated with shots in her eye administered every six to eight weeks by Dr. Brian Perkovich, a Green Bay ophthalmologist, of whom Betty is very fond. “He says I probably crochet mostly by feel now,” she said. Because Perkovich is a Packers fan, she expressed her appreciation for his care by crocheting him a pair of green and gold slippers. 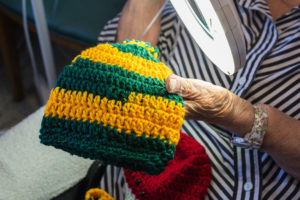 All this crocheting takes a lot of yarn. Betty buys much of it herself and is happy to accept donations from family, friends, hospital staff and anyone else who hears about her work.

Crocheting is not her only project. A longtime member of St. Joseph’s Catholic Church in Sturgeon Bay, Betty and another resident have continued reciting the Rosary together every week, a practice they began in a previous care facility. Now their group has grown to include five other women who meet every Monday morning.

“I like to keep busy,” Betty said. “I don’t understand people who are content to just sit and do nothing.” Not a behavior she’s likely to take up!