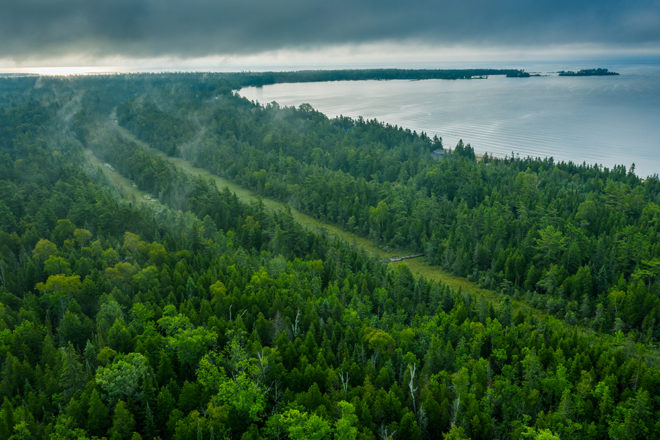 The Ridges Sanctuary protects more than 1,600 of sensitive habitat in Baileys Harbor. Photo by Brett Kosmider.

In June the nonprofit will finalize the acquisition of the property that includes 24 rooms, a house, and five other buildings along Highway 57 on land enveloped by the nature preserve. The purchase is a completion of a puzzle, putting all of the land between County Q and Ridges Road under the Ridges umbrella. It also includes a portion of Hidden Brook, which runs through the property and into the Ridges preserve.

“It’s very fulfilling,” said Richard Hoffman, who has run the inn with his wife Jeannie since 2012. “We always hoped it would happen, that one day it would be part of the Ridges property. We thought that from day one.”

Gill said the acquisition is a pivotal decision not just because of the land and property it adds to the organization founded in 1937 to protect 30 critical acres of plant and wildlife habitat at the north edge of Baileys Harbor, but because of the larger organizational decisions it triggered. When the board said ‘yes’ to pursuing the $1.2 million purchase in the fall of 2021, it also said ‘yes’ to a reevaluation of what the organization could be.

“Acquiring this property is an incredible opportunity, but it also presents an overwhelming task to develop a plan to repurpose the Ridges Inn property and do so in a financially sustainable way,” Gill said. “We realized we had never had a comprehensive master plan done for the Ridges.”

After months of discussions and a wide-reaching request for proposals, the board chose SmithGroup of Madison, to lead the development of a new master plan for the 85 year-old preserve.

Bill Wolff, a Ridges board member and longtime leader of guided hikes of the property, said the challenge represents the most exciting time in his 16 years associated with the organization.

“When we built the new [Nature Center] building, that was a very big move,” Wolff said. “Our philosophy for so many years was that this was a small, special place with a history and culture. Growing like this was going to be a challenge. A lot of people were wed to the old version of the Ridges.”

“We know that for a long time people thought of the Ridges as sort of closed off,” Gill said. “Now it feels very open, a place for everyone of all ages and abilities.”

The Ridges Sanctuary Cook-Albert Fuller Nature Center on Hwy. 57 opened a door to the Ridges that previously didn’t exist. Visitorship grew from about 8,000 people per year to more than 35,000. What was once a three-week summer program for 45 children is now a five-week program serving 200 children. Those numbers don’t include the increased number of visitors who hike the trails or walk the boardwalk without ever entering the nature center. Operations Director Katie Krouse said the boardwalk has presented a greater opportunity than anticipated, in part because it provides expanded access to those of all hiking abilities.

“The mission is protection and preservation of the property, but it’s also educational,” Wolff said. “The future of the Ridges is to educate the young people about their role in carrying the flame forward when we’re gone. Just protecting the land doesn’t do full justice to what the Ridges is worth.”

As the organization leans further into research and restoration, Gill said it will need to dedicate more room than the small workspace carved out of the offices in the back of the nature center. The Ridges Inn property could provide space for research, staff housing and other operations, as well as options for potential partnerships with other environmental and educational organizations such as the University of Wisconsin – Green Bay.

The 20-year master plan will be developed over the course of a year, and will evaluate not just land use, but programming, research, and partnership opportunities. At the heart of the plan will be public input. There will be at least three official public input sessions, and additional feedback will be solicited online.

“We want all that feedback, the good and the bad,” Gill said. “If you’re going to be a member-based organization, you better listen to your members. What programs do people like? What don’t they like? What do they want to see? This is one of those moments when 20 years from now, people will look at this moment as a really important moment.”