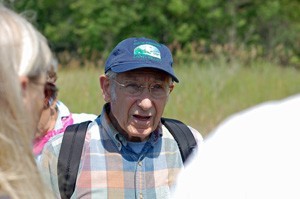 Arnie Widen talks about the bargain sale of the Heins Creek property to the Door County Land Trust during the July 13 hike of the new nature preserve.

On July 7, the Door County Land Trust (DCLT) sent an e-mail inviting Land Trust members to a sneak peek of its latest acquisition, the 74-acre Heins Creek Nature Preserve just south of Baileys Harbor on Highway 57. It offered two tours, one on July 11 and another on July 13. The tours filled up in less than two hours, forcing DCLT to add two more sneak-peek hikes on July 18 and 20, before the preserve is opened to the public next month.

“This was an unusual one,” said Terrie Cooper, DCLT land program director, of this hike.

Because Heins Creek is a Class 2 trout stream, it has always attracted fishermen, who park along Highway 57 to fish the creek.

“People have seen fishermen there for years but it’s never really been open to the public unless you walk up the creek,” Cooper said.

“The vision there is connecting the larger corridor between Kangaroo Lake and Lake Michigan,” Cooper said.

Here is the DCLT’s description of the preserve:  “The Heins Creek Nature Preserve offers an easy trail that meanders along the creek bed, through a northern mesic forest of hemlock, sugar maple and yellow birch, and over rolling sand dunes. The dramatic changes in scenery offer the opportunity to view several distinct landscapes within a mile-long hike.”

The July 13 hike was split into two groups – one group was led by Dale and Mary Goodner, and the other group led by Larry Desotell and Chuck Lauter.

“Actually, this is a very important piece of property,” Mary Goodner told the large group before it split into two to hike the property. “It’s a great corridor for birds. The Wisconsin Breeding Bird Atlas has found that at the last count they had more than 100 species in the Baileys Harbor west quadrant, which this is part of. This is a very important stopping place for birds.”

Chuck Lauter took a few minutes to explain the geology of the piece of land everyone was standing on, which is basically limestone dolomite – part of the Niagara Escarpment – made from the calcium carbonate of animal shells that lived some 400 million years ago during the Silurian Period.

Once the group led by Lauter and Desotell reached the sand dune portion of the property, Desotell took the opportunity to read Robert Frost’s poem “Sand Dunes,” which begins,

“Sea waves are green and wet,

But up from where they die,

Rise others vaster yet,

And those are brown and dry.”

The hikers also had the opportunity to meet the former landowner Arnie Widen, who, when he and his wife, Judith, aren’t residing in Door County as they have since 1982, is a well-known Chicago physician and recently retired from the position of Medical Director of the Office of the Illinois Attorney General.

“This is really exciting,” Widen told the group. “We had 42 acres. We sold 36 acres to the land trust at what’s called a bargain sale price. That gives me a substantial tax deduction, frankly, for charitable purposes. Then my neighbor, Tony Walter, and I talked. He had an additional 38 acres, so we put that together so we had about 74 acres.”

A bargain sale allows a landowner to sell real estate to a charity – in this case, Door County Land Trust – for less than its fair market value. The difference between the fair market value and the sale price is considered a charitable gift, and the seller receives an income tax deduction on the difference.

“It’s a real honor and a privilege to do this for the Door County Land Trust,” Widen said.