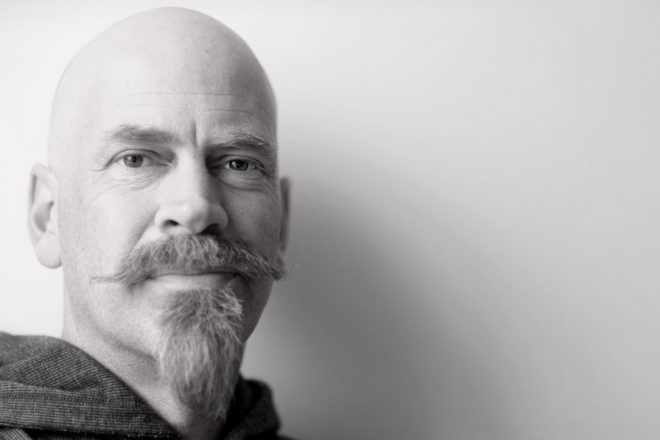 You’ve probably seen Lars Topelmann’s photography. You might even have stopped to ponder his images for a while as you flipped through the pages of a magazine in the waiting room at your dentist’s office, or took a second glance at a billboard.

But you probably didn’t know his name, and you almost certainly didn’t know the photographs were his. For nearly 30 years, Topelmann carved out a niche as a photographer on ad campaigns for brands including Nike, Audi, Converse and Dr. Martens, and was known for his distinctive style of black-and-white photography.

“I homed in on that because you need to have a focus. You can’t be everything because you won’t stand out,” Topelmann said as we flipped through portfolios in the Ephraim home that he and his wife, Monique McClean, remodeled when they moved back to his hometown in 2018. “Having that narrow-ish view – a little goofy, a little fun – pigeonholed me in a good way.”

His work, even when painstakingly planned and staged, feels authentic, spontaneous and random.

“My goal is to make it look natural and comfortable, even in a setup,” Topelmann said. “You can get that photo at the actual moment it’s happening – then you need one photographer. But you have one chance to get it. That’s why you need all those people on a shoot: the designer, the lighting guys, the wardrobe folks. They’re re-creating that. You’re basically making up reality, but you’re trying to use all the cues from what reality is.”

When he was growing up in Ephraim in the 1970s, he didn’t want to be a painter in the shadow of his parents, the late Karsten Topelmann and the late Ellen Sprogø-Topelmann.

“My parents had that painting thing going on,” he said. “I was too impatient for it, and they were kind of rock stars in the art world.”

His dad turned him on to another creative pursuit at an early age, taking him on photography adventures around the peninsula, playing with video and still photography. At Gibraltar High School, Topelmann joined the Ink and Shutter Club, and after graduating in 1981, he studied further at Milwaukee Area Technical College, then at Ohio University in Athens, Ohio.

“It was cool to do something that was artistic, but not painting,” he said. “It’s all in the same territory – a lot of the same principles.”

But breaking into the business in the mid-1980s was hard.

“I thought I was going to be this hotshot photographer, but I didn’t have a direction,” Topelmann said.

He went to Chicago and found work as a photographer’s assistant, working on fashion, food and commercial shoots, lugging equipment, setting up lighting and learning what he loved – and what he didn’t. But he was falling into the trap of being known as a great assistant, not a great photographer. He moved to Portland, Oregon, to reestablish his identity.

There, a friend got him hooked up with a low-paying, but high-profile opportunity shooting a spread on outdoor activities for The Oregonian newspaper.

“It was right up my alley,” Topelmann said. “Windsurfing, snowboarding, kayaking, fishing, showing all Oregon has to offer. And I needed to establish myself as an outdoor, fun photographer.”

His work came out as a big spread in the paper and gave him a calling card. Soon agencies were calling him to shoot in New York, in Ireland for Harp beer, and in Trinidad for 10 Cane rum.

“They send all these people to Trinidad to set up these shots,” he said. “They spend a lot of money. That’s a lot of pressure for a photographer.”

Then the shift to digital changed the industry. Topelmann had specialized in film, and the rise of camera phones stole his niche.

Topelmann stopped doing commercial photography, and he and McClean moved to Ephraim, where he helped her open Pearl Wine Cottage on Church Street. He remains what he calls a “visual builder” – just in a more tangible fashion.

His vision now manifests itself in the tables he welds together in the wine bar, the floating shelf for his record player and albums in his living room, and the hardwood floors he’s refinishing in his late parents’ house.

“I’ve always been really into renovations and buildings and fixing stuff and visually making things look cool,” Topelmann said. “So even though I haven’t done that style of photography in a while, I don’t feel like it’s that far from me. It’s kind of ingrained in there. I’m still trying to do things that create in people an emotional response.”

The 2022 Hal Prize for Photography will offer new opportunities for photographers to enter work in five categories: landscape/nature, people, animals, black and white, and drone.

This expansion into photography categories is a natural evolution of the contest, which grows larger every year, and it comes at the request of past and present judges. As the number of entries has increased, it has became harder to judge the wide range of photos that come across the judge’s desk.

Topelmann said that within each category, he’ll be looking for similar aspects that make a photo stand out.

“Visual impact is number one,” he said. “What am I looking at here? Does it make an impact? Then you go back and refine it in the second pass. Is it something I haven’t seen before? If it’s anything that’s common, it’s got to be a new look, or a more interesting composition.”

An experienced photographer judging the work also looks for qualities beyond that initial impact.

“There’s a technical aspect I appreciate,” he said. “What’s involved in taking the photo? What went into it?”

As for digital manipulation, Topelmann is all for it – to a point.

“If you want to move something visually in a photo, if it enhances the image, that’s great,” he said. “If it’s heavy handed and looks unnatural, to me that’s not very pleasing.”

Photography is just one part of the Hal Prize, the annual writing and photography contest presented by the Peninsula Pulse; Write On, Door County; and Peninsula School of Art that offers prizes for poetry, nonfiction and fiction in addition to photography. Winners receive cash prizes, mugs from Clay Bay Pottery and publication in 8142 Review, the annual literary magazine from Peninsula Publishing & Distribution. Submissions will be accepted until Sept. 16 at thehalprize.com.