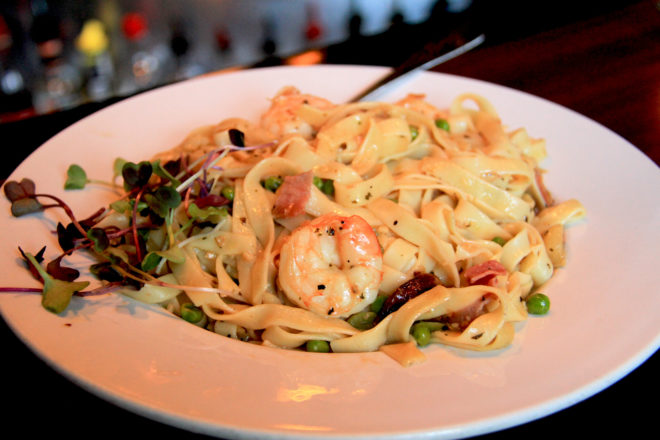 A couple of weeks ago the weather finally – and officially – transitioned to summer, and it was one of those perfect evenings when it seemed quite unthinkable to head directly home to be inundated with laundry and face a meager selection of food in the refrigerator. The weather seemed worth celebrating, so instead of going home, I made my way to Alexander’s, intent on sampling a few delicious appetizers and unwinding with a chilled drink at the bar.

Alexander’s, a favorite fine-dining establishment in Fish Creek, is known for excellent seafood, steaks, cocktails and traditional dishes with flavorful flair. Located on the edge of Peninsula State Park on Highway 42, the restaurant says on its website that it offers “casual elegance.” This means that although it’s a fine-dining restaurant, it does not have a dress code and welcomes vacationers and locals who are “dressed to the nines or direct from the beach.” The come-as-you-are atmosphere allows access to a top-notch dining experience even on a whim, which is how I wound up seated at the bar mid-week.

A quick review of the appetizer menu provides a snapshot of what the restaurant excels at: everything from fresh seafood and oysters to escargot and baked brie. The first thing that caught my eye, though, was Bruce’s crostini bread.

Bruce Alexander – the head chef and owner with his wife, Jill – has been working and cooking in Door County for several decades and launched Alexander’s in 2000. I had a feeling that if an item bore Bruce’s name, I would not be steered wrong. This appetizer is French bread sliced and filled with herb butter and Gorgonzola, blue, Parmesan and Romano cheeses, then baked to a golden brown. It arrived inconspicuously in a standard bread basket, looking quite like the standard loaf, but it proved to be even better, with a buttery, melt-in-your-mouth texture and warm, crisped crust.

For the next course, I took a recommendation from neighboring frequent diners who were willing to vouch for the tuna, which, they said, was a “must try.” The sushi-grade blackened or sesame-encrusted tuna is available as an entree, but you can also sample a smaller portion from the appetizer list. I went with the appetizer in order to also try the shrimp tempura, which my server said is another most-loved item.

As I sipped my drink (a summery Corona and lime), the restaurant began to fill up as guests appeared and had a drink before heading to their dinner tables. The next round of appetizers arrived quickly, and I dove in.

The tempura shrimp were delicious, and the hot-mustard dipping sauce was dynamite: at once sweet, spicy and bold. The tuna was exceptional as well, seared perfectly on the outside and served with wasabi mayo, pickled ginger and soy sauce. The texture was firm but easy to slice, as sushi-grade tuna should be.

On the way to feeling full, I made a final order of shrimp carbonara from the Italian section of the menu. The dish featured large shrimp sautéed with roasted garlic, basil, prosciutto, scallions and green peas; tossed with white wine, lemon juice and egg fettuccine; and topped with Italian cheeses. It was not overly seasoned, which let each ingredient have its moment within each bite. The pasta was done al dente, and the shrimp were de-tailed, making them easy to enjoy. Each time I thought I was finished, I’d find myself picking up my fork a moment later for more.

Although thoroughly satiated, I couldn’t resist the sound of the made-in-house dessert menu. I listened longingly to that evening’s selection of cheesecake and crème brûlée, but ultimately the tiramisu called to me. The Alexander’s staff includes a pastry chef who is in charge of pastries and desserts, promising an authentic flavor. Again, I was impressed with the quality: the Italian mascarpone custard was infused with Kahlúa, layered with espresso-soaked ladyfingers and topped with chocolate cookie crumbles.

It was a delectable evening of dining that made for a memorable night. The service was swift, friendly and efficient, and the price was very palatable for a mid-week night out, which I have a feeling I’ll be doing more often.