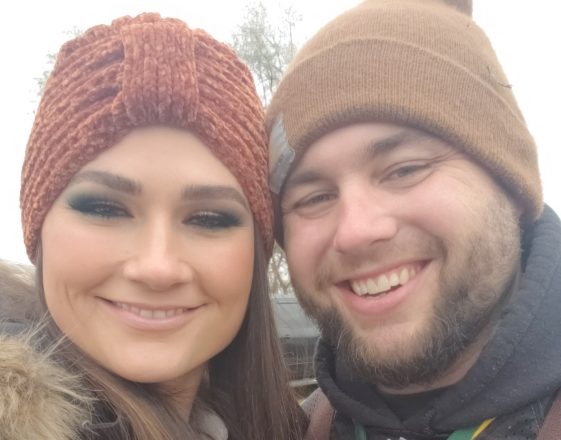 Carving Themselves a Hobby

Ashley Leist was driving when a deer ran out and hit the passenger side of the car. The deer slammed into the arm of her husband, Cody, who was hanging his arm out the window. His arm broke. Shards of glass from the mirror flew into the car and cut Ashley across the chest, and blood poured into her lap. Nausea overcame her, she passed out, and Cody had to take control of the wheel with his good arm to maneuver them safely into a ditch.

The accident left Cody out of work at his family’s tree-service business. He healed, but then he broke the arm again the following summer while throwing a pitch in a baseball game.

“The whole crowd heard my arm break,” he said.

That break ended his baseball career, but he said it was probably for the best. If it hadn’t happened, he never would have discovered his new hobby.

While healing from the accidents, Cody received a book about chainsaw carving from his mother to help him pass the time. The book gave instructions on how to carve a bear, so Cody gave it a shot after he had healed in 2010. From there, he just kept going.

“I was always interested in chainsaw carving because my family owns Affordable Plus Tree Service,” Cody said. “I’ve always been around the wood, and I’ve always seen the art form and all that.”

Cody and Ashley’s new part-time hobby soon needed a name, and they decided on Door County Chainsaw Services. The Leists were creating carvings for fun, but they started getting orders from people who had seen their work.

They’d post pictures on Facebook, and suddenly they had requests for wedding gifts – starting with their friends, but spreading by word of mouth to many others. Now the holiday season has become a busy time for them.

“If you would have been here just a week ago, this whole garage was filled with carvings,” Cody said.

The Leists moved into a new house last February that has a large garage that houses their workshop. It smelled of freshly cut wood, and there were huge logs waiting in the yard. Last winter, Ashley said, they were working out of a tiny shed.

“Last year around Christmas, we had carvings all over in our dining room, and paint everywhere in the house,” she said. “Having this workshop is the best. We’ve made even more carvings because of it.”

Each person has a role: Cody does the carving because, Ashley said, the chainsaw is too heavy for her to hold for long, and Ashley does the detailing and painting.

“That’s what really makes them pop out and look good,” Cody said.

The process is different each time, depending on the subject of the carving. Their most-prized pieces so far are a seven-foot wizard and a seven-foot Tyrannosaurus Rex, which took about 12 hours of work.

Bears and eagles are the most popular, and they take only an hour or two because the Leists have created so many by now. They’ve compared their bears and eagles from the past to the ones they make now, and Cody said there’s notable improvement.

“You always try to make the next one better than the last,” he said.

Both Leists had always been interested in art, but they’d never pursued it as a career. Ashley majored in psychology and minored in art at the University of Wisconsin-Green Bay because she was interested in art therapy. She’s now an at-home mom with their youngest son while their other son attends elementary school at Sevastopol.

Cody went to Fox Valley Technical College for graphic art but decided to continue working in his family’s business. Two-dimensional art wasn’t his strong suit, but he’s gotten better at drawing since taking up wood carving.

They had been in the Art Honors Society together at Sevastopol High School, where they met and even shared a locker. Ashley graduated in 2006, and Cody the following year. They were high school sweethearts who married in 2012.

Wood carving is just a hobby at this point, but the Leists hope to one day have their carvings featured in a gallery or even have a gallery of their own.