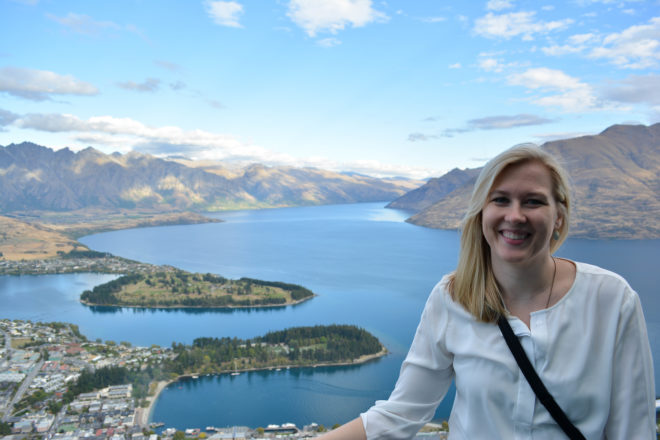 Her love for news reporting began at Sevastopol

Sevastopol High School graduate Jen Zettel-Vandenhouten knows there’s no slowing down when you’re immersed in a world full of deadlines, interviews, transcribing and writing as an engagement editor for USA Today Network-Wisconsin, a division of Gannett.

“It’s hard to think about slowing down when you’re in it like we are,” Zettel-Vandenhouten said.

Based in Superior, Wisconsin, she covers the 10 markets that fall under the umbrella of USA Today Network-Wisconsin, including the Post Crescent, Press Gazette and Milwaukee Journal Sentinel. She’s working with the Sentinel’s Ideas Lab on solutions journalism, which means that she reports on solutions to problems in the state and its communities.

Some of her favorite stories have come out of this project. In September, she worked on a piece about bystander-intervention training on college campuses, and in October 2018, she wrote a piece about a domestic violence prevention program called the Lethality Assessment.

With two other reporters, she has also reported on the abduction of Jayme Closs after Closs was found in Gordon, Wisconsin. Zettel-Vandenhouten was there as a backup reporter but ended up being the first reporter to get an interview with Jeanne Nutter, the social worker whom Closs flagged down after she escaped her confinement.

“I just was there as a backup reporter, like, ‘Tell me who you need me to call. I will call; I will go’,” Zettel-Vandenhouten said. “I went to Gordon that day and stood in the snow and shot B-roll, and I filed my story from my car.”

She learned that in a high-stakes situation, it’s good to be the local reporter in a case that has captured the nation’s attention.

“Those connections that you make as a local journalist matter because then those officials trust you,” Zettel-Vandenhouten said. “They know that you’re invested in the story.”

The Closs case was one in which every news outlet wanted to get the story. Reporters feel pressure, and that’s where Zettel-Vandenhouten’s ethics came into play.

“One thing I’ve always tried to do in my career is to treat all the people I’m covering – especially [in] really sensitive situations – with the same respect that I would want a reporter to treat my family [with],” she said. “I think that in general, the media tries to do that, but there are some reporters who don’t.”

The wide array of stories that she covers and the people she learns about is why she likes news journalism – there’s always something happening.

Education reporting was something that helped her learn a lot, she said, especially about the Wisconsin public school system. She covered education in the Fox Cities, which included numerous K-12 districts and three colleges. She was reporting on school boards, property taxes, budgets and referenda.

“I feel like reporting on education helped me [to] be a more informed citizen,” she said.

After graduating from high school in 2007, Zettel-Vandenhouten double-majored in journalism and English at UW-Madison. Her journalism career took off after she joined one of the two college newspapers, the Badger Herald. As a campus beat reporter, she was writing four to five stories a week and became an associate editor her senior year.

Like any other college organization, they liked to have fun, but the Herald was the closest thing to a real newsroom, she said. People took it as a serious priority. When she interned at the Peninsula Pulse after college, she was prepared.

“It wasn’t really a big shock as far as what was expected of me in the workplace – having a professional relationship with your editor and just learning how to go through edits in a constructive way,” Zettel-Vandenhouten said. “I feel like that’s something that the Herald has always been good at: teaching young adults how to just take on that responsibility and approach it very seriously.”

But her high school newspaper was the true beginning of it all – and what sparked her interest in news journalism. Zettel-Vandenhouten had always liked writing, but until then didn’t know what kind she liked.

“I just liked how with journalism, it’s something new every day,” Zettel-Vandenhouten said. “There are so many different ways you can be involved in journalism, whether it’s reporting, editing, shooting photos or laying out pages.”

She also credits her high school teachers Linda Thompson and Heather Spetz for being passionate and encouraging about reading and writing. They got her excited to learn, she said.

Participating in sports, music, art and the newspaper allowed her to become close with her teachers and coaches. She still remembers the lessons she learned from her basketball coach, David Wheat: that you can always turn your day around.

“The teachers get to know you, I feel, on a very deep and personal level,” Zettel-Vandenhouten said. “They’re invested in your future, and I think that’s really great.”

She encourages upcoming grads to follow their career interests and talk to people in the community who hold those positions.

“Door County is a place where everybody knows everybody, and people are always willing to help.”