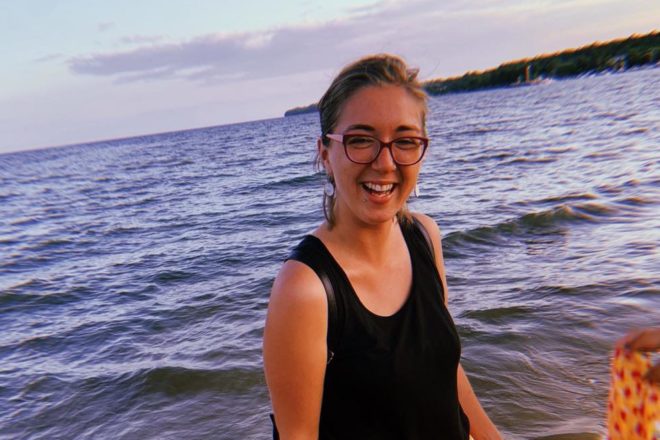 When Sadie Nelson watched a woman give birth in India, she decided that she no longer wanted to study to become a nurse midwife. Though she believes that giving birth is something everyone should witness, the experience sent her in a different direction.

Participating in a Rotary International Youth Exchange program during her junior year at Gibraltar High School gave Nelson the opportunity to eliminate a career path she had thought she wanted for a long time, which is not something that many students get to explore before college. Nelson is now a UW-Madison junior studying conservation biology.

Growing up in Ephraim and attending school at Gibraltar offered many opportunities to be close to nature. The high school’s location near Peninsula State Park allowed Nelson’s gym class to take walks in the woods, and it facilitated nature walks during lunch with former biology teacher David Tupa, who also oversaw an ecology club.

Nelson contributed to restoring a school courtyard that was overgrown when she began high school. She enjoyed taking breaks to sit on benches they had made, planting sunflowers and watering in the greenhouse. The space even became an outdoor classroom, which some of her teachers took advantage of.

“There was a push to explore your surroundings up here,” Nelson said. “We were surrounded by water and forest. You really had to try hard to not get out and be in it.”

A botany course at UW-Madison also played a crucial part in steering Nelson toward biology, even at an intensive, five-credit level.

“It was the best thing ever, best choice ever,” Nelson said. “It reaffirmed I was on the right path.”

A regimented class schedule in college wasn’t something she was used to, but it helped her buckle down and study hard. She also joined a sustainability club called REthink Wisconsin for on-campus involvement.

This summer, in addition to working at Shoreline and Wild Tomato and babysitting, Nelson volunteered at The Ridges to continue gaining experience related to her degree. She assisted with the orchid-restoration project, doing plot monitoring and orchid inventory.

Right now, Nelson plans to keep her career options open. She’s interested in wetland conservation or working with the U.S. Forest Service, but she knows there are a lot of paths she could take with her major.

Leaving high school, Nelson knew she’d figure things out as she went along, but there’s one important tip she’d give to upcoming grads that has improved her college experience.

“Get help if you need it,” Nelson said. “I feel like that was really hard for me freshman year [of college].”

The adjustment between going to Madison and coming back home during the summer has been her biggest challenge. Each place has its perks: being surrounded by nature in Door County, and being immersed in the political and demographic variety in Madison.

Nelson won’t be in either place this fall, though. Instead, she has been accepted into a study-abroad program in Lima, Peru – one of her biggest accomplishments to date.