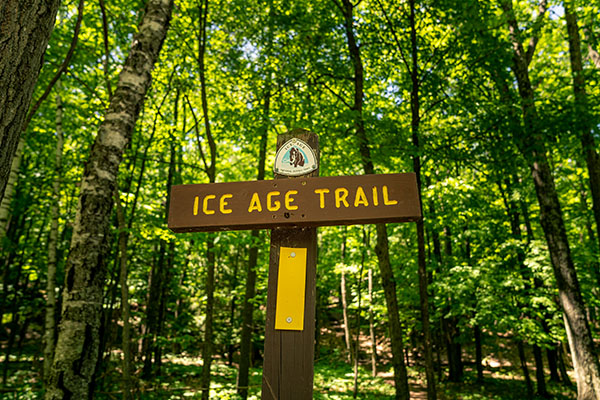 When 25-year-old Emily Steuer tells people that she’s spending her winter hiking the entire 1,200-mile Ice Age Trail, she gets a range of reactions.

Friends and family of the Ellison Bay resident aren’t surprised, knowing that she loves a good challenge. But people who don’t know her as well are often just confused.

“Most people’s initial reaction is like, ‘Why? Why would you want to [go] in the grueling, horrible wintertime?’” Steuer said.

Her answer is simple: She loves the outdoors, and her job at the seasonal Ephraim restaurant Trixie’s means that she has extra time to enjoy it in the winter.

“When I found out that I had January through most of April off, I knew immediately that I wanted to do my first thru-hike during these months,” Steuer said.

Although she has tackled several multiple-day hikes before, they’ve all been section hikes, which are select portions of a long trail. For instance, she spent six days hiking 70 miles of the Ice Age Trail in 2020, and nine days hiking 145 miles of the same trail the following year. She’s also hiked in Iceland, the Grand Canyon and other spots as well.

This upcoming hike will be Steuer’s first time walking along an entire trail in one go, or thru-hiking. The Ice Age Trail snakes around Wisconsin, starting in Sturgeon Bay, going south to Janesville, turning north to Antigo and ending at St. Croix Falls on the northern side of the Wisconsin-Minnesota border.

One of 11 National Scenic Trails, the Ice Age Trail winds through landscape features that glacial ice carved out more than 12,000 years ago, according to the Ice Age Trail Alliance. Those features make for a distinctive and beautiful hike, Steuer said.

“Especially in the wintertime, you just experience this pristine natural beauty like no other,” she said.

On Jan. 5, she’ll start at the trail’s eastern terminus in Potawatomi State Park, and she expects the hike to take her 65-70 days, walking 15-20 miles each day at one to two miles per hour.

Steuer will wake up at 5 am every day, start walking at 6 am and go until about 4 pm, especially during the darker winter days. At that point, she’ll find a place to sleep for the night.

“I’m the type of hiker where I like to get from point A to point B as fast as possible and as efficiently as possible,” she said. “For the most part, I want to spend the least amount of time at camp, because to me, the thrill of hiking is putting miles behind you and seeing all the sights.”

Still, Steuer’s schedule is a tentative one, because as she learned during her 2020 winter hike along the Ice Age Trail, such long hikes don’t always go according to plan.

“I was dealing with blizzard conditions and below-freezing temps, and I was not prepared for it,” she said. “You always have to be prepared to throw your plan out. It’s crazy how small obstacles can turn into major challenges in the winter.”

Steuer has been getting ready for this hike since July by collecting gear, reading books about how to pack effectively and setting aside money for the trip itself.

She’s also been consulting (and “fangirling a little bit” over) other hikers who have tackled the whole Ice Age Trail during the winter. Only two have done so: first Mike Summers in 2017, then Emily Ford in 2021.

Though Steuer will be hiking alone, she won’t be without help. She’ll have “trail angels”: locals who volunteer their time and resources to help hikers along the Ice Age Trail.

“When I section-hiked parts of the trail in 2020 and 2021, I met some of the most generous people ever, who offered me rides and food, beverages and shelter,” she said. “The community that surrounds the Ice Age Trail is unmatched.”

On nights when Steuer isn’t staying with a “trail angel,” she’ll camp in a tent, which isn’t always easy in the winter. To stay warm, she’ll take a polychrome ground sheet to put under the tent, then stack a couple of other pads on top of that, followed by sleeping quilts.
“In the wintertime, it’s crucial to have as much space between you and the floor as possible,” she said, because that’s where the most heat transfer occurs.

Every day when Steuer camps, she must unpack and repack her 70-liter backpack, a process that she said requires “a lot of shoving.” Without food and water, the base weight of all her gear in the backpack is 35 pounds. With food and water included, she estimates the weight will be closer to 60 pounds.

Usually, the goal is to pack as light as possible, but “with winter backpacking, you need to focus more on having safe gear rather than being ultra light,” Steuer said.

One of the only modern conveniences she’ll take with her is her cell phone – for podcasts, music and the FarOut app, which provides a map of the Ice Age Trail and marks possible camping and resupply spots along the way.

The latter is crucial because hauling around 60 pounds and walking 15-20 miles a day requires lots of extra body fuel. For water, Steuer will likely boil snow, and for food – about 4,000 calories per day, she said – she’ll restock in the towns that the trail runs through.

“Another thing I love about backpacking is you just get to eat all the time,” she said with a laugh.

When Steuer reaches the end of the trail, she’ll stay in the St. Croix Falls area for a while, then get a ride back to Door County with some friends.

She feels a special bond with the Ice Age Trail.

In 2019 and 2020, she was halfway across the world in Hamburg, Germany, teaching English as a Fulbright Scholar. The pandemic forced the program to end in 2020, sending her back to Green Bay, where she grew up.

At that time, “I felt like I was suspended in space, trying to find something to grasp onto,” Steuer said, but she soon found that “something” in hiking – and more specifically, hiking the Ice Age Trail.

“I’m not-so-secretly in love with it,” she said.