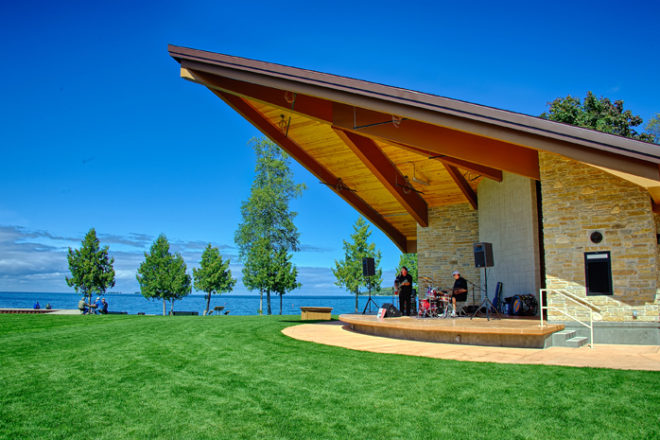 The Waterfront Park Pavilion is the centerpiece of the largest urban public waterfront in Door County. Photo by Len Villano.

In the last four years, Sister Bay has spent more than $10 million to expand public access to its waterfront. In 2007, the Village of Egg Harbor spent $1.6 million to buy property to expand its public beach. And last week, the Town of Liberty Grove brought a proposal to pay $2.35 million for 431 feet of shoreline in Gills Rock to its residents.

The numbers, when added up, are staggering, and this is only a sliver of the dollars we’ve spent to secure and conserve the last slices of shoreline for the public on our peninsula. The above dollar figures don’t include purchases made by the county, the Department of Natural Resources, or those made by conservation organizations supported with stewardship funds. 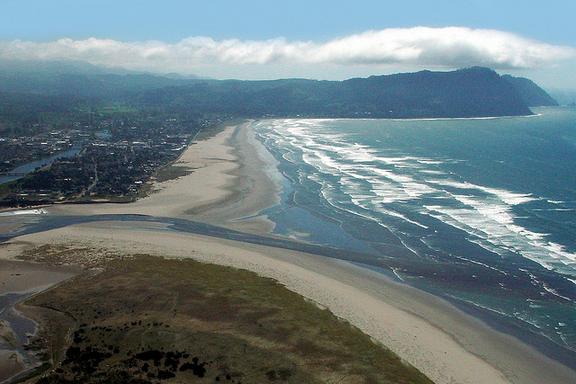 All 363 miles of shoreline in Oregon belongs to the public. Photo courtesy of the Oregon Coast Visitors Association.

I point this out not to argue for or against public land purchases. As one who has never been fortunate enough to afford waterfront property, I am thankful for the foresight leaders have shown in securing waterfront for all over the last century.

But in light of the expense today, one has to wonder if there aren’t better ways to accomplish our goals for access.

Take Egg Harbor, where the Alpine Resort has allowed the public to use its beach and pier for decades, an informal partnership that provided this writer many a leap into Green Bay waters in his youth. Unfortunately, we rarely search for such opportunities anymore.

This July I visited Lake Geneva for the first time, where I was introduced to a remarkable neighborly agreement. On that small lake, ringed by the castles of some of Chicago’s wealthiest, joggers may circle the lakefront through the backyards of those awe-inspiring castles. They aren’t halted by NO TRESSPASSING signs, hedgerows, or fences, thanks to a long-established public right of way.

The origins of the agreement date to the 1870s, according to George Hennerly, executive vice president of the Lake Geneva Area Chamber of Commerce.

“The first mansion owners who built here in the 1870s accessed their property primarily from the water” because the roads were relatively undeveloped, he said. The waterfront filled the function that roads and driveways do in most communities. Through common use, an agreement among neighbors, people have always been allowed to walk along the lake.

It’s now a public right of way, which means it can be used for its original intended purpose, walking or jogging (but no bikes, horses, or motorized vehicles).

Hennerly said the right-of-way has been tested in court, most famously when one property owner placed a bull in his yard with gates on both sides. His very un-neighborly move was shot down in court, and the bull had to go.

“The lake is 21 miles around, and each property owner treats his or her stretch of the route differently,” Hennerly said. “Some do nothing, others have made a brick path, and others have even installed benches.”

It’s not considered a sidewalk, Hennerly said, so the user has the assumed risk. Unless a property owner were to do something malicious, like putting spikes in the ground (or a bull in the path), they’re not liable if someone gets hurt on their property.

Much further afield, another state took a different route to secure public rights to the water. The entire 363-mile Oregon coast is open to the public, making it one of just two states (Hawaii is the other) that has given all of its beachfront to its citizens and visitors.

“No one can own the beach in Oregon,” said Lucy Gibson, public relations director of the Oregon Coast Visitors Association.

That shoreline is dotted by 79 state parks, as well as wildlife preserves, and beaches interrupted not by PRIVATE PROPERTY signs but only natural hurdles like the state’s famous bluffs and monoliths.

The beaches once came under threat. A hotel owner near Canon Beach put up a fence in the mid-1960s, claiming the beach in front of his property as his own. But Governor Tom McCall had other ideas, and pressed hard for passage of the Oregon Beach Bill, which would claim all “wet sand” within 16 feet of low tide for the people.

The bill passed 57 – 3 in 1967, securing “free and uninterrupted use of the beaches” for the public. Today the beach is the number one tourist attraction in the state.

“We’ve capitalized on tourist opportunities by marketing our free and open coast,” Gibson said. “Our tourism income dwarfs what we would make from property taxes if it were private.”

Above the beach, mansions enjoy a view of uninterrupted sands and the ocean beyond. Those homeowners enjoy miles upon miles of beach, rather than a short, privatized section, and so does the public.

Both Hennerly and Gibson said their communities haven’t experienced substantial trespassing or crime problems, despite the fact that the public has access to property at the doorstep of astounding homes and properties.

“Because you can only access [the Lake Geneva path] in certain places, it would be tough to make a getaway,” Hennerly said.

In Oregon, Gibson said the number of public access points available in the form of parks and paths make it unnecessary for people to cross private property.

Hennerly also said that in Lake Geneva, they don’t promote the path to tourists, out of respect for the property owners. “We don’t want to over-love it.”

So what do the stories of these two tourist communities have to do with Door County? It begs the question of whether we’re investigating all of our options in our struggle for access to our most valuable natural resource.

We have taken an all-or-nothing approach to securing access, based on the idea that either shoreline must be bought with tax dollars, or it will be privatized and turned into condos or McMansions. But what if we pursued another option, a public-private partnership that would benefit both parties?

Say a developer did buy the shoreline in Gills Rock to build condos and a marina. Why not compromise? Allow a builder room for a little more density, or concessions on height restrictions, or more slips in a marina, in exchange for a permanent public boardwalk and access to a launch facility. Perhaps the town could kick in funds for construction of a launch and fishing pier and preservation of a couple historic fishing buildings.

Some might say that’s playing with fire, but when the other option is a municipality shelling out $2.35 million for three parcels, and another $7 – $13 million to improve it and build a marina, such concessions are worth at least exploring. Such an agreement would keep property on the tax rolls (and likely increase the tax dollars coming in), keep the tax burden on residents down (and thus make it more affordable for the next generation to buy in), and save developers time and money.

As a citizen, would you rather quibble over two stories versus three, or two bedrooms on a lot versus four, or would you rather have permanent public access to trails along the water, or atop a bluff, for far less expense than buying the property outright?

There’s no guarantee a developer would agree, of course, but it provides a way to think of securing the waterfront that expands our all-or-nothing framework.