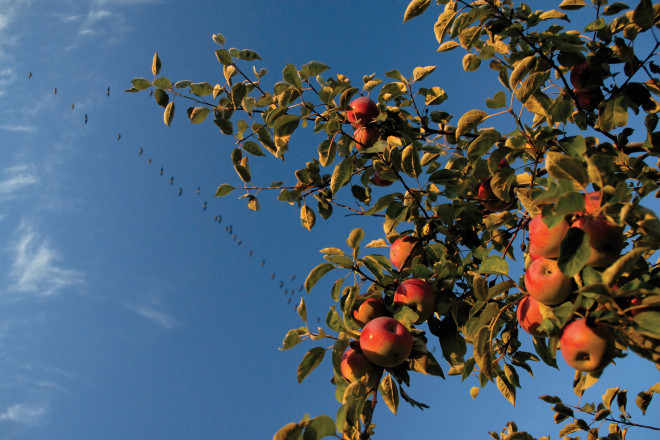 Door County has been home to a thriving apple growing industry for more than a century. Photo by Dan Eggert.

When people think of the fruits of Door County labor, cherries inevitably come to mind. However, the peninsula’s iconic orchard industry also boasts a bountiful fall harvest of apples.

Seaquist Orchards, for instance, may claim the largest acreage of cherry orchards in the country, but the seeds of the family business go back to Swedish immigrant Anders Seaquist, who planted apple trees around the foundation of his home in Ephraim back in the 1860s. Now, six generations later, family members still tend 27 acres of apple trees.

In addition to the apple orchards rooted in tradition and the peninsula’s shallow soil, forward thinking orchard owners like Steve Wood are taking the necessary steps to maintain a niche in the apple industry into the future. Wood Orchard is the only grower in the state of Wisconsin licensed to produce and sell SweeTango apples, a hybrid of the Honeycrisp and Zestar! apples developed by the University of Minnesota.

So, as visitors flock to Door County this fall when cherries aren’t ripe on the trees, an abundance of apple-oriented activities – and eating – abound. Whether taking a jaunt up to Washington Island for the farm museum’s cider pressing party, picking your own apples to craft a batch of applesauce or stopping in at The Cookery for a piece of warm, caramel apple pie, the following articles just touch the surface of the apple industry in Door County – the core of which runs much deeper.

In this issue of Door County Living, we tell some of the stories of an enduring industry steeped in tradition.

The Next Generation of Apples: Honeycrisp and SweeTango