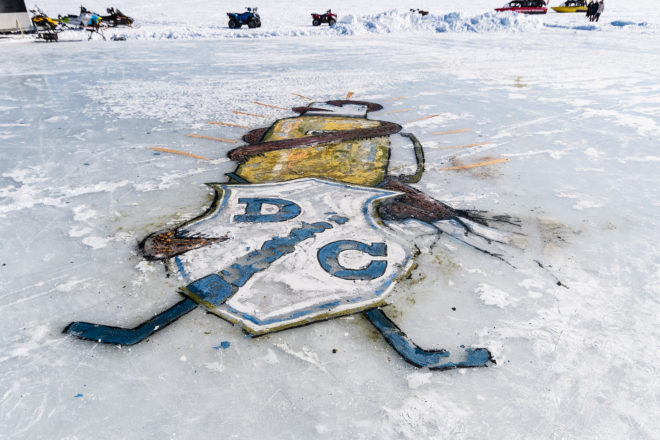 Those who ventured beyond the ice rinks of last weekend’s Door County Pond Hockey Tournament on Kangaroo Lake were treated to the latest visual experiment of artist Kate Roth.

The Baileys Harbor painter swapped oil paints and canvas for milk paints and ice to create a 7’ x 15’ mural that merged the tourney’s logo with the coveted Stanley Thermos (part of the winning teams’ prize package) wrapped in a pair of “lake monster” tentacles.

“The idea to do it was thinking, when you’re watching a hockey rink indoors, they have painted ice,” Roth said. “They have their logo in the middle and then they have lines.”

“There was a little bit of wind so some of my things blew away a couple times,” Roth said. “But it wasn’t too bad; it was sunny and nice. I just had on snow pants and a coat and a hat and two pairs of gloves.”

Roth set the completed painting with a fine mist of water, providing a thin layer of icy protection that helped the design last through the weekend.

“I just thought it would be fun to test it out and see what it could be, and see how paint takes to ice,” Roth said. “It was just a personal experiment. Also to see how it would change or if it would stay.

“The piece was a fun way to kind of graffiti a public space without permanence,” she added. “Also, I typically like to work large so this was an outlet for working that way.”

The artist worked on the painting in one afternoon on Kangaroo Lake, with a sunny sky, light wind and temperatures in the low teens. Photo by Len Villano.

The completed piece was on display during the Door County Pond Hockey Tournament on Feb. 10. Photo by Len Villano.