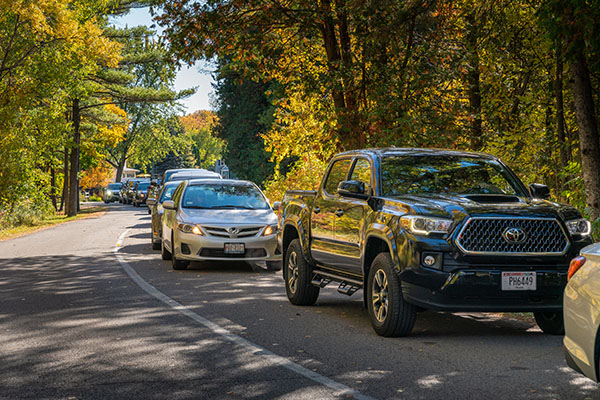 First, the coronavirus pandemic drove people indoors. Then, opportunities for safe recreation and relaxation lured them outdoors, both in Door County and nationwide.

If there’s a bright side to all of this, Chris Holicek thinks that’s one of them.

“People are being very careful, and yet they’re able to be out and enjoy nature,” said Holicek, who’s president of Friends of Peninsula State Park.

She noted that myriad writers and artists have found inspiration in nature, and now families are drawn closer by the pandemic as well.

“Nature gives a lot back to you – a lot of calmness,” she said.

The Wisconsin Department of Natural Resources (DNR) reported a 14 percent increase in fishing-license purchases over the 2019 pace through midsummer. The DNR also reported that weekend state-park attendance in May 2020 rose by more than 44 percent compared to the previous May. During the heart of the camping season, 73 percent of the state-park campsites were reserved this year in July, compared to 62 percent statewide during the same time period in 2019.

Those working at Potawatomi and Whitefish Dunes State Parks can attest to the increased user numbers.

“Attendance at both properties is up fairly significantly compared to previous years,” Superintendent Erin Brown Stender said. “I don’t have figures for September yet, [but] our visitation at Potawatomi State Park is almost 240,000 visitors, and that’s about 46,000 more visitors, year to date, than we’ve averaged for the past four years.”

Despite the state’s closure of park nature centers, and despite sand washing away from much of the northern half of the beach at Whitefish Dunes, the park south of Jacksonport also hosted more visitors.

“Visitation skyrocketed at Whitefish Dunes this year,” Brown Stender said. “There were months when we had 20,000 more visitors in a single month than we had in previous years. Sometimes parking reached capacity, and we had to temporarily turn people away.”

Until September, more than 230,000 visitors had trekked into Whitefish Dunes.

“That’s more than 58,000 more than the average for that same time period for the past four years,” she said.

Brown Stender did not see a significant increase in wear and tear at the park, but some newcomers did not obey signs to stay off the dunes.

“Our staff and volunteers were certainly spending more time picking up litter than we would in normal years,” she said.

Peninsula State Park Acting Superintendent Jennifer Birkholz saw a major influx of visitors during the spring and also during fair-weather September weekends. The cancellation of festivals on fall weekends surely sent more visitors to parks and public lands, too. But Birkholz said the park usually fills to capacity during midsummer even during normal years, and she saw no massive increases in use this July and August.

“Peninsula is a busy park; it always has been and always will be,” Birkholz said. “Our numbers have increased slowly over the years … You can’t really fit more people into the park than we allow. Once the parking spots are all full, you can’t fit more people in.”

Friends of Peninsula State Park’s business manager, Steve Strucely, said his group has not been able to contribute to some of the events and nature activities that draw crowds. Still, he saw an increase in families spending the entire day at one park rather than driving in just to use the beach or take a hike.

Holicek lives in Fish Creek near the park. She said she has generally observed more people spending more time outdoors.

“I know a lot of people – instead of going into restaurants – are picnicking, even when it’s not so nice out,” Holicek said.

One of her friends, who’s from Chicago but is working from a condo in Fish Creek, leaves her home office to enjoy lunch in the park almost every day.

“She said she never used to do that in the city,” Holicek said. “Since she’s working from home, [she] can just kind of zip across the street. That’s pretty cool.”

Want to Give Your Favorite State Park a Boost?

Souvenirs, attire and other items sold by the Friends of Peninsula State Park and similar volunteer groups for Potawatomi and Whitefish Dunes State Parks help to pay for state-park improvements. Those include the mostly completed nature center addition at Peninsula, an accessible fishing dock at Potawatomi, and the replacement of campfire rings and improvements to the Brachiopod Trail at Whitefish Dunes.

How can you help? The Friends groups invite direct donations, but they also sell their items on their Facebook pages and online at sites such as peninsulafriends.org (Peninsula), runwild.org (Potawatomi) and thefriendsofwhitefishdunes.org (Whitefish Dunes).