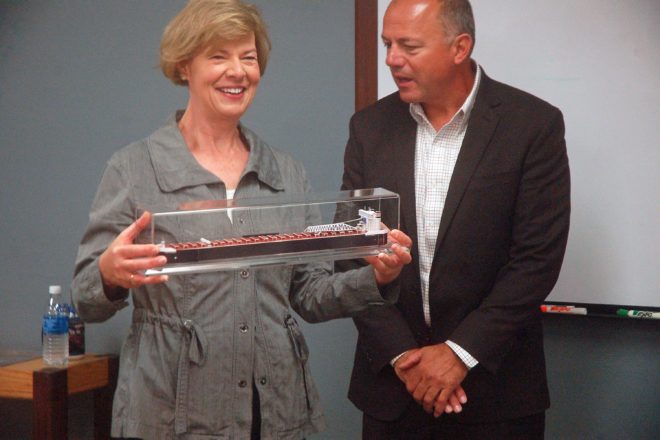 Sen. Tammy Baldwin holds a model of the American Steamship Co.-owned 1,000-foot lake freighter Walter J. McCarthy Jr., presented to her by Mark Pietrcarlo, CFO of American Steamship and chair of the Lake Carrier Association’s board. The McCarthy was built in 1977 at Bay Shipbuilding and launched as the Belle River. The vessel was renamed in 1990 in honor of former Detroit Edison Chair Walter J. McCarthy Jr. Today the McCarthy carries coal from Superior to Detroit Edison power plants in Michigan. Photo by Jim Lundstrom.

The award is presented annually to a legislator who has helped advance waterborne commerce on the Great Lakes and St. Lawrence Seaway. Baldwin was cited at the ceremony for being “hugely effective, more so than anybody else in Washington,” a sentiment that was echoed by James Farkas, president and COO of Fraser Shipyards in Superior.

“Senator Baldwin’s first term in the Senate has been remarkable for her understanding of and commitment to shipping on the Great Lakes and St. Lawrence Seaway,” said Brian D. Krus, president of the Great Lakes Maritime Task Force, in announcing the award,  “Her grasp of the issues, and more importantly, her response to the challenges facing shipping on the Fourth Sea Coast has been instrumental in moving several projects forward.”

Baldwin was especially recognized for taking the lead on two important lake traffic issues. No 1 is to get a second heavy icebreaker built to prevent the cargo delays of the severe 2013-14 season.

“It became a mission to really work and push the Coast Guard to recognize what you’ve recognized for a long time, the need for a second heavy ice breaker,” Baldwin said to the assembled industry members. 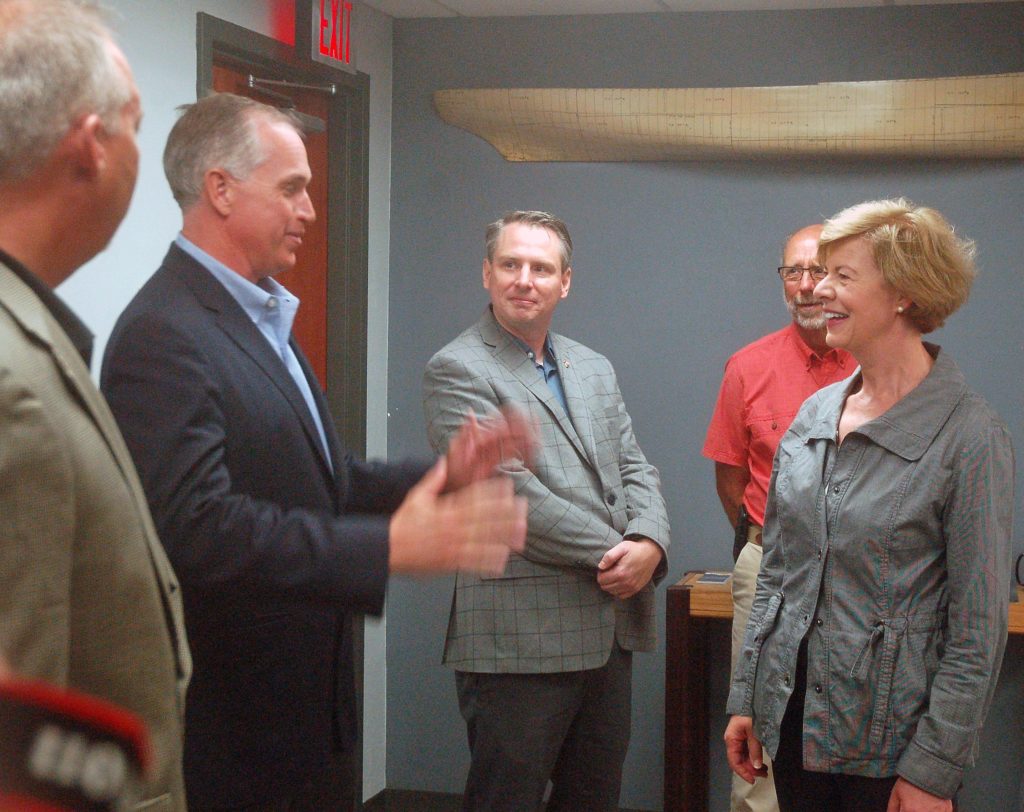 Baldwin said she inserted legislation to provide $2 million to be spent in the next five years to get the design process rolling, but said she would need help from everyone to convince Congress that this is a critical issue for the Great Lakes.

She was also cited for breathing new life into the Small Shipyards and Maritime Communities Act.

Baldwin said the small shipyard act was authorized some time ago, but was never funded. She amended the original act to include appropriations to provide assistance for small shipyards and maritime communities through fiscal year 2020. She said $10 million was allocated last year, and has heard of no significant resistance, so expects the same will be approved for the next budget.

Baldwin promised to continue as a strong supporter of Wisconsin’s maritime industry. She becomes the fourth Wisconsin legislator to receive the award since its inception in 1998. Previous recipients are Senator Ron Johnson, Rep. David R. Obey and Rep. Mark Green.

Before taking a tour of the shipyard, Baldwin talked briefly to the Pulse regarding her recent letter to the U.S. Environmental Protection Agency and the U.S. Army Corps of Engineers, urging them to conduct a full review and assume permitting authority from the state of Michigan on the Back Forty Mine project that is one state permit away from approval on the banks of the Menominee River.

So, how likely is it that the feds will take a closer look at the project?

“I can’t give you odds today,” she said, “but what I wanted to reflect is the many voices in Wisconsin I was hearing, whether it was the cities and counties that have put together thoughtful resolutions in talking about potential contamination of the river that separates the Upper Peninsula and Wisconsin, whether it was concerns for consultation rights for the Menominee Nation. You know, I heard a lot of voices.”