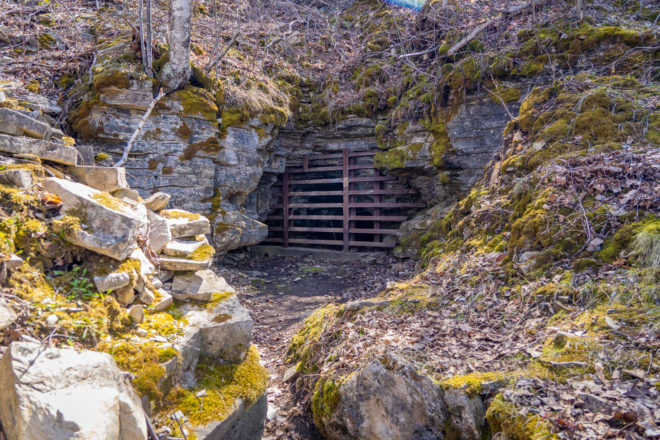 After pandemic protocols limited or eliminated cave tours nationwide the past two summers, the County of Door will again host tours of Horseshoe Bay Cave this summer. The county is also developing a trustee program to enable more groups to tour the ecologically and geologically senstive cave. Photo by Rachel Lukas.

Tours of Horseshoe Bay Cave to resume this summer

Make no mistake: White-nose syndrome has wiped out more than 90% of cave-hibernating bats in Wisconsin and Door County in just seven years. The fungal pathogen caused a crash from more than 1,000 bats and four species in Door County’s Horseshoe Bay Cave to just a few dozen little brown bats during the most recent counts.

However, researchers such as Virginia Tech biological sciences professor Kate Langwig, who partners with groups collecting data on the disease and bat populations, saw some encouraging numbers during the fall 2021 and spring 2022 counts.

Scientists discovered the arrival of white-nose syndrome in bats near Albany, New York, in 2007. Populations in New York crashed a year later but have rebounded slowly during the past few years. Research published in spring 2020 in Nature Reviews indicated that some bats survive the winters because of fewer of them using the hibernation spaces and transmitting the fungus, and some survivors may have developed a tolerance to the disease.

Langwig said it could take years to tell whether Horseshoe Bay and Midwestern Indiana brown bats have developed any pattern of persistence.

“Numbers are slightly up, but it’s still just a fraction of its former size,” Langwig said. “I’m not jumping up and down with excitement, but it’s positive.”

She’d love to see bat populations in Door County return to the days when residents and tourists expected to see lots of them fluttering past, eating mosquitoes and other insects on summer evenings. But she can’t declare any real comeback yet.

“It’s just too early to tell,” she said.

In addition, although Horseshoe Bay Cave used to host hibernating populations of northern long-eared bats and eastern pipistrelle bats, researchers found none of them there during the past two years. In addition, biologists have found only a few northern long-eared bats in recent years anywhere in Wisconsin, and they’ve become rare throughout most of their 37-state range.

After pandemic protocols limited or eliminated cave tours nationwide during the past two summers, the county will again host Horseshoe Bay Cave tours this summer.

“We’re going to do our annual cave tours toward the end of July,” said Burke Pinney, Door County parks manager. “We haven’t quite nailed that down yet. We typically will make our announcement in June of when those tours will be, so people will have a solid month to register.”

Only 10 people plus two tour guides will be allowed per hour-long tour.

In addition, Door County Parks and Facilities officials are working to allow tours by groups such as high school and middle school science classes or Boy Scouts and Girl Scouts.

“We are creating a trustee program for the cave,” Pinney said. “That will take a few years to develop,” with access allowed for certain groups only – “not just the individual person who wants to show up on a Tuesday.”

Volunteer key holders would be trained to open the cave for certain groups, as approved by the county.

“The cave is very ecologically and geologically sensitive,” Pinney said. “A trustee training program would develop people who could give tours to those kinds of groups, allowing a bit more access to the cave than is currently available.”

This March, the U.S. Fish and Wildlife Service (USFWS) again proposed reclassifying the northern long-eared bat (Myotis septentrionalis) from a threatened species to an endangered species in an effort to halt the growing extinction before declines become irreversible.

The USFWS hosted a public informational meeting on the proposal in early April and welcomes science-based comments until May 23 at regulations.gov. (Search for FWS-R3-ES-2021-0140.) The USFWS previously requested the reclassification in 2013.

Bats are critical to healthy, functioning ecosystems and contribute at least $3 billion annually to the U.S. agricultural economy through pest control and pollination, according to the USFWS.