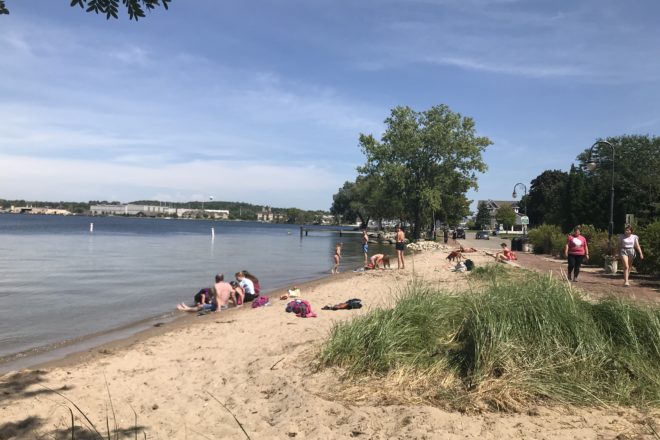 The three-acre park features a sandy beach connected to the park by a paved walkway that connects to Sawyer Park at the foot of the Oregon-Maple Street bridge. Photo by D.A. Fitzgerald.

The popular sand beach in Otumba Park will have a lot more beach-blanket room this summer.

The Sturgeon Bay Common Council approved an upgrade that will expand the beach, located on the West Waterfront at 225 W. Juniper St., to more than double its current depth.

Improvements were made in 2012 to prevent beach closures due to stormwater runoff, but storms still batter the neighborhood beach. It’s also vulnerable to erosion and shoreline damage during periods of high water, as have happened during the past two seasons.

“It’s been a hot topic ever since I’ve been here,” said Mike Barker, the city’s municipal services director.

The beach’s length will remain the same, but the depth will more than double. The sidewalk and lighting will be pushed back, and a curved wall will also serve as seating.

The kayak and canoe launch area on West Juniper Street east of the beach will be slightly improved with a pebble shore instead of a dock.

The beach will be ADA accessible, complete with ADA-accessible picnic tables, features that will “make that a destination for anyone with issues of mobility,” said Alder Spencer Gustafson.

The project will be the city’s third beach-erosion repair in a year, said Alder Helen Bacon.

“We did Sunset Beach, Bayview Park and the railroad spur, and to get all this done in one year within budget, or pretty close, it’s very exciting,” she said.

The project is expected to be completed in time for the summer season.