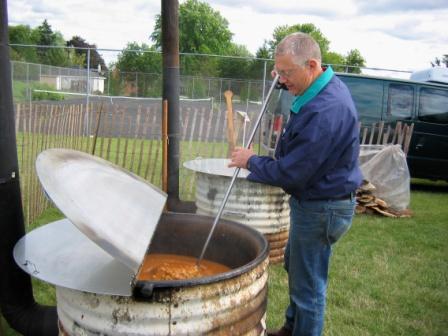 Traditional Belgian foods will be sold during the drive-through Belgian Days event July 11-12. Some of these featured foods will be (shown at a previous celebration) Belgian pies; trippe (pronounced “trip”) – the Belgian version of a bratwurst, which a young girl is enjoying; and booyah – a traditional chicken soup – made in barrels. Submitted photos.

Health warnings against large social gatherings during the global pandemic have caused the cancellation of many local festivals. Instead of canceling the 59th annual Belgian Days festival at the Brussels Town Park, however, the Brussels Lions Club got creative and planned a “drive-through” food and beverage service. The fundraiser will be held July 11, 3-7 pm; and July 12, 11 am – 3 pm.

“Normally all day Saturday and Sunday, it’s wall-to-wall people underneath the pavilion,” said Jim Noll, the club’s treasurer. “We knew that would not be healthy for the community, our members and our volunteers.”

Given that Belgian Days is the club’s only source of income for the $25,000-$30,000 that it gives away annually for causes far and near, “we had to do something,” Noll said.

The club’s 49 members knew they could not have a parade, live bands, baseball and cornhole tournaments, card games and their numerous other typical activities during the two-day event. But a big draw, Noll said, has always been the foods that the large concentration of Belgian immigrants brought with them when they made southern Door County their home.

People would drive for miles for specialties such as trippe (pronounced “trip”), which is Belgium’s answer to the bratwurst; jut, a kind of mashed potato made with bacon grease, nutmeg and spices; booyah, a chicken stew made in large drums; and Belgian pies in a variety of flavors, including the most popular: prune.

“Since people really like the foods, we thought, why not have a drive-through?” Noll said. “Our park is perfectly arranged for it. We have a long pavilion.”

The plan is to line up the cars and hand menus to the motorists. Once inside the park, the motorists will each have one car hop who will remain with the car for the entire drive-through experience: taking the order, handling the transaction, filling and packaging the food order, and delivering it to the vehicle.

“The very last station will be dropping off raffle tickets, and from there,  we will be encouraging them to leave,” Noll said. “We don’t want to encourage people sticking around and breaking social distancing. Some people think that might sound kind of cold, but we’re in different times now, folks. Some members, we’re still trying to get that through to them.”

That means no tables in the park or places to get out of vehicles to eat the food. Neither will any walk-ins be allowed to purchase food for the drive-through event. The club members and volunteers working at the event will wear masks or face shields and will maintain social distance from the vehicles. All workers’ temperatures will also be taken before they start their volunteer shifts.

“We know we’re going to be under the microscope because we’re one of the few and first in quite an area doing something like this,” Noll said.