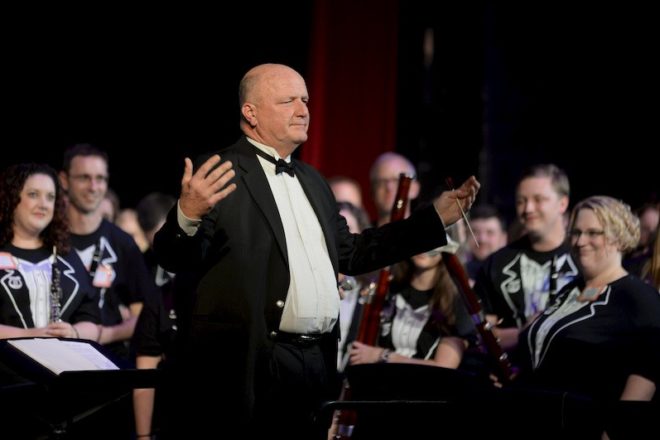 Jim Stombres during his last concert as band director at St. Charles North in spring of 2015. Photo by Mary Beth Nolan.

As the saying goes, age is just a number, and this is especially true in regard to music. The Adult Concert Band Camp, held Aug. 19 – 22, at Birch Creek Music Performance Center is a unique opportunity for those who wish to grow in their musicality, or just want to spend a fun weekend in Door County.

The camp is co-directed by three well-respected and award-winning musicians: Chip Staley (Naperville, Ill.), Steve Sveum (Sun Prairie), and Jim Stombres (St. Charles, Ill.). Stombres said of the camp, “It’s something that’s meant to be enjoyable…dig the horn out and play a little bit and come up and have the experience and share your love of music with other people that feel the same way as you.”

Stombres has been a high school band director for 37 years in three suburban Chicago high schools, finishing his career at St. Charles North High School. He has spent 29 summers at Birch Creek on faculty for the Big Band Jazz sessions.

For the first time on Birch Creek’s campus, adults in the community will get the opportunity to perform onstage in the century-old Dutton Concert Barn. “That’s the vision of this, you come up and learn, and interact in an environment that’s pretty unique, giving a concert in a barn and being able to experience the county,” said Stombres.

The combined knowledge and musicianship of Staley, Sveum and Stombres in addition to playing alongside fellow musicians will be an experience of a lifetime. For more information about the adult band camp visit birchcreek.org.