Try as I have, I can’t remember when I was first introduced to a live Black-capped Chickadee. Most likely it was as a young boy on my grandparents’ farm situated high above the Opichka Valley and the Kewaunee River, near Slovan, several miles northwest of Kewaunee.

Call it apple orchard ornithology if you wish, but that’s what always comes to mind when I reflect upon the birds I saw and enjoyed in the small grove of fenced-in, organically grown apple trees at the farm. They were protected from the cattle, growing between the south side of the granary and the road.

I distinctly recall the Eastern Kingbird, Eastern Bluebird, Gray Catbird, Baltimore Oriole and American Goldfinches. Surely Chickadees must have been there too, the farm being so close to dense stands of Arborvitaes and other evergreen trees bordering the river. 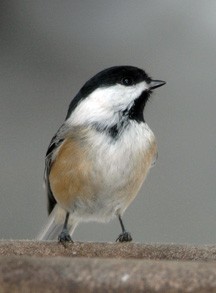 The Black-capped Chickadee is one of America’s favorite feeder birds.

When learning the songs and call notes of birds first became important in my interest in ornithology it was the Black-capped Chickadee’s high, plaintive, far-reaching “WHEE-dee-dee” song that threw a curve at me. Surely it was an Eastern Phoebe that was doing the singing, or so I thought.

Throughout my time of interpreting nature, including birds and their vocalizations, hardly a day in late spring and early summer passed without at least one person offering their thanks for correcting them. For years they, too, had thought they were hearing Eastern Phoebes in the distance when indeed they were Black-capped Chickadees. The Eastern Phoebe’s rather short and brisk song sounds like, “WHEE-be.”

The call note, “chickadee-dee-dee,” after which the bird was named, is quite unmistakable. In the case that you may spend some time this winter in the South and see and hear some chickadees, don’t be surprised if their call notes and songs are considerably higher in pitch and faster than you are used to hearing “up north.” Very likely you are seeing and listening to a Carolina Chickadee, which is about a half-inch shorter than the “Black-capped,” looks like its northern cousin, but produces faster and higher-pitched calls and songs.

Of the several hundreds of Black-capped Chickadees I’ve handled in past years while banding them, not one left me with the impression of being gentle and tame. Quite the contrary! They were wild creatures in every respect.

I would never have guessed a bird so small could peck so hard with its beak. They commanded authority! What spunk and determination they displayed as you held them carefully but firmly while fastening the numbered aluminum band to one of their legs. Then, upon releasing the birds, it was customary to receive quite a tongue-lashing from these little beady-eyed bundles of boundless energy. It would have been great fun to know what they really were “saying!”

Bird banders through the years tried unsuccessfully to figure out how to sex a chickadee by carefully observing its plumage. My banding friend, Harold Wilson of Ephraim, had a quick answer when asked if one could tell the male from the female chickadee. His reply was in the form of a toast: “Here’s to the chickadee; the sexes are alike you see. It’s hard to tell the he from she, but she can tell and so can he!” 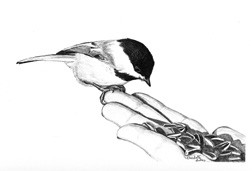 This pencil sketch of a chickadee by Charlotte Lukes is on the cover of Roy’s first book, “Once Around the Sun, A Door County Journal.”

The chickadee migration has most likely ended for the year. Yes, some of these birds do migrate. It’s quite possible that some of the chickadees coming to your feeders now nested farther to the north and were here already by sometime in October. They will remain here for the winter and return northward next spring for nesting. Banding studies have proven that the peaks of their migration northward occur during March and early April.

A Black-capped Chickadee experience I had one late fall, when I was still a bachelor and living at the Ridges Sanctuary, never ceases to amaze me. My good friends Walter and Bertha Reinhard had delivered a trailer-full of small stovewood I needed for my old kitchen wood range, the “Queen,” and it had been dumped in front of the garage in which it would be stored. I happened to have my 1960 Dodge Dart station wagon parked nearby and had accidentally left one of the rear windows partly open.

I worked all that Friday afternoon until I had finished stacking the wood in the garage, had a quick dinner and then headed to Sturgeon Bay to do some shopping. An hour or two later, upon getting into my car and closing the door, I was immediately surprised to see some creature fluttering up against the windshield trying to get out. At first I thought it was one of the large silkworm moths, such as a Cecropia. Then it dawned on me, it was a chickadee that had flown into the car through the opened window back at the Ridges, while I was stacking wood, and couldn’t find its way out.

So there I was with a wild trapped chickadee about 20 miles from its home, obviously the Ridges Sanctuary. The fact of the matter was I had to return the bird to its real home rather than release it in the city in the middle of the night where it surely would quickly perish. It was very easy for me to harmlessly capture the little bird and carefully place it on the window crank where it perched quietly several inches from my left knee all the way back to Baileys Harbor.

Once I was parked in the driveway, very near to where the bird unknowingly had become a captive about four or five hours earlier, I gently picked the bird from the perch, clasping it firmly. Now with the bird in one hand and my powerful six-volt lantern in the other I walked about 100 feet down the rangelight trail. Aiming the beam of light about 25 feet upward and toward a nearby White Spruce tree, I then simply released the little bird and it followed the beam of light directly onto the limb at which the beam was pointed. The chickadee was safely back home! 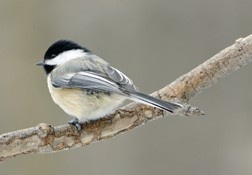 Here is a back view of the chickadee.

I firmly believe that little bundle of perpetual energy was back at the sunflower seed feeders the next morning as though nothing unusual had happened.

Some of the Native American Indians of our region named the Black-capped Chickadee “ch-geegee-LOK-sis.” Listen carefully the next time you hear one talking in chickadee language. This favorite of many might also be saying, “Chickadee-dee-dee, keekee-kirk, keekee-kirk, dee-dee-dee, which really means, “Merry Christmas and a happy New Year!”

Please take good care of your chickadees. Provide them with the very best you can offer, and they’ll repay you many times over!