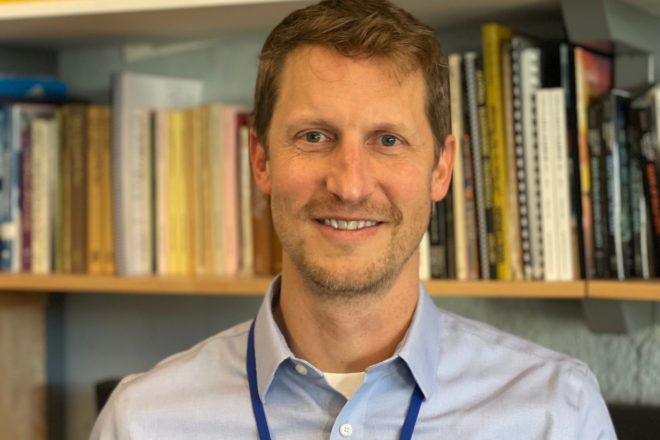 Eric Blumreich passed away unexpectedly after joining the Boys & Girls Club just one month ago.

The Boys and Girls Club of Door County has a new CEO, and this one is confident he’s going to be around for a while.

Eric Blumreich stepped into the position Jan. 3 as the organization’s fourth CEO since Julie Davis left in May 2019. Blumreich said he has spent his first month getting acclimated to the organization, its staff and the community’s needs.

“The entire board is confident that Eric has the skill set needed to position the Boys & Girls Club of Door County for long-term success,” said Erich Pfeifer, president of the Boys & Girls Club, in announcing the hire. “We know he will maximize the positive impact the club can make on kids in our community.”

Blumreich acknowledged he has some work to do in convincing people that he’ll be around for the long haul – a job he believes starts with the commitment of the board of directors and staff to look forward.

“As I start, I’m just keeping my ears open and listening to what’s going on here at the club and in this community,” he said.

Blumreich’s first weeks on the job have given him a new perspective on the county he has experienced as a visitor since 1993.

“As an outsider, sometimes we think about what it is as a tourist, and the affluence we see, and the ability to go to so many nice spaces,” he explained. “But as a tourist, you don’t always look at the fact that this is a rural community, a blue-collar community and one that struggles building and maintaining a workforce. How do we work with our young people to make sure they’re getting everything they need to self-actualize and become the next generation of folks who love and serve this community as a whole?”

Blumreich most recently worked in major gifts at St. Norbert College and previously served as the executive director of Camp Tekakwitha, a summer camp on Shawano Lake. He’s also been involved with several other youth-focused organizations, including Court Appointed Special Advocates (CASA) and International Youth Sailing of Oshkosh.

That combination of working with youth and fundraising experience is a boost to the Boys & Girls Club, which provides classes, recreational activities and meals for 80-100 children from kindergarten through middle-school ages every day.

“To combine these two loves [fundraising and working with youth] into one role is a privilege,” Blumreich said.

Through CASA, he began serving as a mentor of a 14-year-old boy who is now in college.

“Just to see what it means to be a mentor and supporter in a life that may not have had all the opportunities I had is such a rewarding experience to me,” Blumreich said.

Now he aims to expand that impact at an organizational level through the Boys & Girls Club. Conversations are underway about expanding services in Southern Door and Northern Door through partnerships with schools and the YMCA.