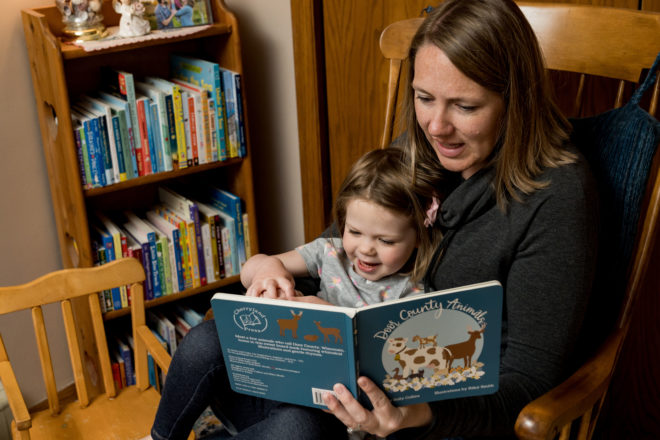 The author was inspired by her daughter, Greta. Photo by Luke Collins.

As a girl, Sally Collins would send letters to Pleasant Company – the publishers of the American Girl doll series – offering her writing services and storytelling prowess.

Although the company never took the 10-year-old up on her offer, Collins eventually realized her dream of getting her work published through the release of her children’s board book, Door County Animals.

“My friends have started to own businesses, put their stuff out there and are starting to invest more in themselves,” Collins said. “That’s really inspiring, and I felt I could do this.”

Her interest in writing was in the realm of fiction – and she has a novel in the works – but it was the birth of her daughter, Greta, in 2019 that put Collins on the course to writing children’s books.

“I’m really excited about this novel, and I plan to publish it and want to do a good job, but as I was writing it, we started to go through IVF [in vitro fertilization],” Collins said. “I realized that writing a novel is extremely emotionally draining, especially because I tend to want to write about sad topics.”

When she and her husband, Luke, found out they were pregnant, they started to collect children’s board books during their travels as little mementos that they could share with their daughter.

After a search for a Door County–themed board book came up with nothing, Collins decided to pick up her pen and started writing again, but this time in rhyme.

“I wanted something special for the tots of Door County – visitors and locals alike – especially after seeing other beautiful board books in other parts of the U.S. that we bought and continue to look at to talk about our travels and experiences,” she said.

Collins decided to focus on the natural beauty of Door County, showcasing various creatures and critters that one would find here in their natural habitats. Collins jotted down rhymes in spare moments with Greta and began to plan the book’s layout, even considering illustrating the story herself. But, after an attempt to draw a goat went poorly, Collins decided to look elsewhere to find the perfect illustrator match.

A young artist named Riley Smith was working for Luke, and Collins started to see her illustrations on social media. She knew immediately that Smith’s work was a perfect match. When Collins approached Smith about the project, she hesitated until meeting with the author.

“Sally’s constant encouragement and support made me feel confident that if she believed in me, then I should, too,” Smith said. “She knew that I was capable of creating something beautiful that she was proud to put her name on.”

The two worked in tandem to realize Collins’ dream. Even though Collins had an idea of what she wanted the layout to be, she gave Smith a lot of room to create.

“I had the assumption that it would take me such a long time to decide on layout, color palettes and the overall vibe,” Smith said. “However, once I had the rough sketches created, it was only about an hour until it was flowing out of me and into art boards. It all just felt right, which is the best thing an artist could ask for.”

When Collins received the illustrations back from Smith, she took them to her young daughter to see whether Greta could identify the animals on the pages. Any she may have misidentified went back to the artist for small changes.

While this was going on, Collins was working on finding the best rhymes and animals to depict. At first, she tried to represent all of the major sights in the county, but then she decided that she wanted her nod to her home to be more subtle, with its main goal being to teach a little lesson about appreciating the natural world without bothering it.

“I wanted it to be something that, even if you don’t live here, you can enjoy it and appreciate it.”

After a few spreads and rhymes were rejected on the advice of her nieces and nephews, Collins settled on 10 that created a look into the natural diversity of Door County.

Because of the niche nature of her book and wanting to keep creative control, Collins gathered people around her who could offer advice and armed herself with a copy of Self-Publishing for Dummies before creating her own LLC and publisher, Cherryland Press.

From her experience, Collins recommends that people who take the self-publishing route get samples before settling on a printer – it took her a few tries before she found a company that printed board books with the quality she was looking for.

Her hopes for Cherryland Press lie beyond being just a “Sally Collins publisher” in that she wants to work with more local artists, tapping into their talents and potential.

But for now, after a few delays due to shipping, Collins has received copies of her completed board book, which is now available in the community.

“I’m proud of myself for making it happen, especially for Greta,” Collins said. “It’s fun to have that for her – this board book Mom made that you inspired.”

Picture Books Versus Board Books

The basic difference between these two styles of children’s books is the materials they’re made from. Picture books can be printed with hard or soft covers, with the pages inside made from either glossy or matte paper. Board books are typically made from thick cardboard, including the interior pages.

Board books are generally designed for children ages 0-3, so they need to be easy for small hands to grasp. This style of book is also often preferred for small children because of its durability.

Picture books tend to be more illustrative and long, while board books tend to be shorter and feature simple rhymes and visuals that help young learners start to identify objects, numbers and letters.