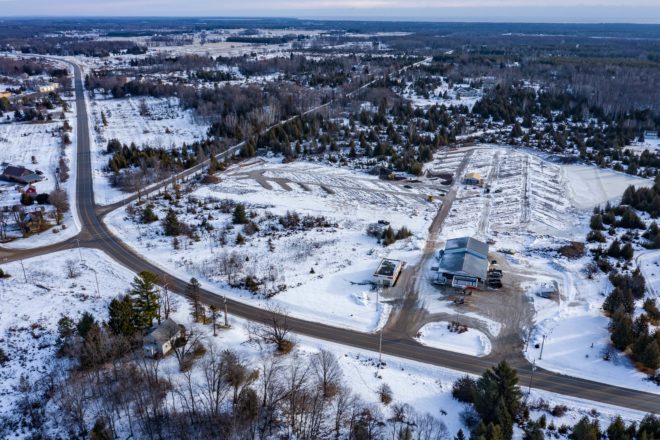 At a time when campground proposals across the county are having difficulty earning approval, a new 70-site campground is scheduled to open at Dovetail Trading, just south of Sister Bay, during Memorial Day weekend. The project gained approval from municipal and county boards thanks to a measured and methodical approach, according to owner Terry Wurster.

“You have to take a substantial leap of faith to build one of these things,” Wurster said, citing the engineering studies in which he invested prior to approval. “We consulted with the zoning people down at the county as far as what they thought was acceptable.”

The 22-acre campground will include 60 RV sites, all of which are equipped with water, sewer, 50-amp electrical services and Wi-Fi. There will also be 10 tent sites and a bathroom-and-shower facility.

Wurster said he kept the project smaller than what existing regulations technically allow, particularly because he lives at the property.

“We were sensitive not only to the surrounding area and the neighbors as far as layout and density, but we were also thinking of ourselves,” Wurster said. “We were the most affected landowner.”

Existing regulations in the Town of Liberty Grove would have allowed for more than 300 sites at the property. The county, which administers the zoning for Liberty Grove, revised its code relating to campgrounds last summer, and the town has been working since then to revise its own regulations to further restrict campgrounds.

“We felt that the new county ordinance that was done last summer was good but didn’t go quite far enough,” said Nancy Goss, a member of the Liberty Grove Town Board and chair of the Plan Commission.

The changes at the county affected the Heartland zoning district, of which Liberty Grove has the most of any Door County municipality.

“Some of that Heartland butts up against Newport State Park and Mink River Estuary,” Goss said, citing the state park’s International Dark Sky designation and its internationally significant wetlands, which are recognized under the Ramsar Convention. “We wanted to make sure that those environmentally sensitive areas had some protections.”

Goss commended Wurster for his plan and said his proposed campground satisfies the more restrictive regulations that are being proposed.

The draft of the proposed ordinance includes lowering the maximum density to 10 sites per acre, establishing vegetative-screening requirements and providing a detailed site plan for new campground proposals.