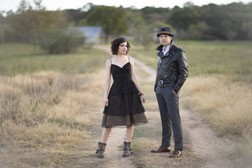 Carrie Rodriguez and Luke Jacobs will perform at Door Community Auditorium (DCA) on July 26 at 8 pm, presenting an evening of music that will range from red-hot country to noir rock to plaintive folk. Musical maverick Rodriguez uses her sultry contralto voice and fiery fiddle playing (along with Luke Jacobs’ remarkable guitar picking) to create music that is both alluring and defiant. Together, Rodriguez and Jacobs can’t be pinned down, shifting easily between a desert swing and an urban strut. The Boston Globe hails Rodriguez and Jacobs as “one of the most compelling new voices on the roots-rock scene.”

Texas native Carrie Rodriguez came to national attention a decade ago when she began performing with singer-songwriter Chip Taylor (Wild Thing, Angel of the Morning) and has since established an impressive roster of touring, recording, and co-writing affiliations.

Luke Jacobs is a native Minnesotan whom The Guardian has called “an impressive exponent of acoustic, electric and lap steel guitar and harmonica.” Currently based in Austin, Texas, Jacobs adds sophistication and texture to Rodriguez’ distinctive style.

Tickets range from $18 to $25. Advance reservations are recommended and can be made through the DCA box office, located at 3926 Highway 42 in Fish Creek. The box office is open Monday-Friday, 12-5 pm. Tickets can be purchased in person, on the phone at 920.868.2728, or online at dcauditorium.org.