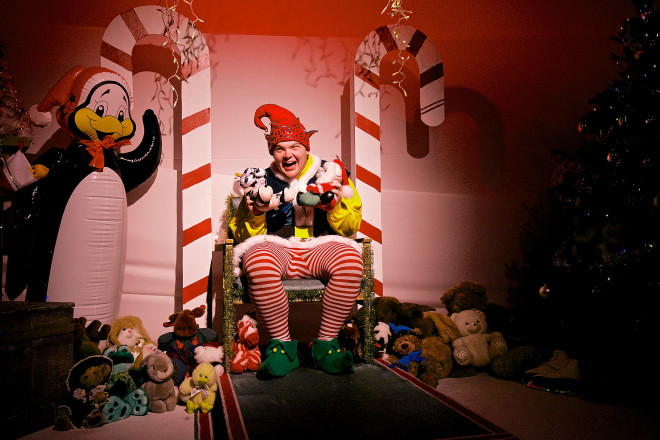 Dan Klarer stars in ‘Santaland Diaries,’ a play by David Sedaris and directed by Robert Boles. Photo by Len Villano.

Three years ago, Third Avenue Playhouse audiences were introduced to Crumpet the Elf, a character based on humorist David Sedaris’ stint working as an elf at Macy’s SantaLand in New York City in the mid ‘90s.

Playing that role was actor Dan Klarer, who has returned to the Door Peninsula once again to reprise his role in the one-man show, Santaland Diaries, now playing at TAP through Dec. 31.

The past three years have been a whirlwind for the actor, who has taken the stage for both TAP and Northern Sky Theater and earned his master’s degree in classical and contemporary text from The Royal Conservatoire of Scotland.

The Peninsula Pulse caught up with Klarer following his final dress rehearsal before bringing the show to paying audiences to find out how the theater graduate has changed his approach to a character and show that takes “a wry look at how the holiday season brings out the best – and the worst – in us all.”

Peninsula Pulse (PP): How has your approach to playing Crumpet evolved since you first took the role at Third Avenue Playhouse in 2012?

Dan Klarer (DK): Well, I am three years older, more experienced and more trained. I would say I have been able to use that experience to my advantage. Crumpet is much less manic and angry. I really tried to humanize him this time around and show his internal struggle with his situation more.

PP: What have you been up to in your acting profession since then?

DK: I did a two-man show called Greater Tuna at TAP the following summer. That fall I reprised my role in Northern Sky’s Victory Farm and went straight into Ernie da Moocher in Guys On Ice for a winter run in Madison. After that, my acting took a back seat while I was in prep for graduate school. Then I did a plethora of performances in Scotland both through the Royal Conservatoire and a few outside companies including Bard in the Botanics.

PP: How has that helped shape your approach to Crumpet in 2015?

DK: Of course, an actor draws from all their experiences. My master’s program definitely gave me a lot to think about and gave me many tools to help craft my performances. I have a more grounded sense of myself and am now able to create a much more complex character.

PP: Do you identify with the character Crumpet the Elf in any way?

DK: Yes, I would be just as appalled as anyone to see parents and children do the things that are represented in the show. I also have to put myself in the character’s shoes, pointy or otherwise, and identify with why he’s telling the audience these things. He obviously has a point to all this and I can relate to that just as much as anyone.

PP: Have you been back to New York’s Macy’s since playing Crumpet a few years ago? If so, did you have a different perspective on it?

DK: I have been back and believe it or not, my roommate actually worked as a Macy’s elf the following two Christmases. I definitely had the show in the back of my mind, but you have to remember that David Sedaris wrote this in the ’90s. It was a very different mentality and it is not what Macy’s is today.

PP: What is your favorite scene from Santaland Diaries?

DK: I do like talking about the different Santas I have to work with, but I admit my favorite thing is going into the audience. Then I can actually see their faces and reactions up close.

PP: Santaland Diaries is a staple of regional, college and high school theaters. Why do you think it is so popular?

DK: For one, it’s inexpensive to produce a one-man show. The big thing, though, is that it shows the awfulness of holiday capitalism and the somewhat appalling side of human nature. We need to be reminded of that sometimes. It of course has a good message at the end too, which is essential.

PP: In an interview with the Pulse three years ago, you said the challenge of playing Crumpet was that, while you are technically playing David Sedaris, you also have to play yourself and relate to the situations he was in. Has that gotten easier?

DK: Definitely easier than last time. Lots of things have stayed the same, but my portrayal of this man has slightly softened and I’m actually trying to bring out more of my characteristics while keeping the super cynical attitude and snarky demeanor of Sedaris.