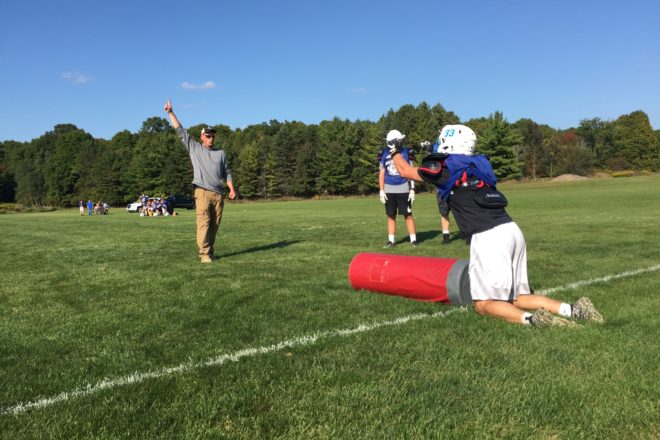 Southern Door Football Coach Pat McCarty holds a number in the air to force a player to keep his head up when performing a tackling drill. Photos by Myles Dannhausen Jr.

“Rip the wings off the bird,” shouts Pat McCarty across the practice fields behind Southern Door High School. “Heads up, arms in. Take your helmet off the plane of the ball carrier.”

These are phrases McCarty, head football coach, repeats over and over again as his players go through repetitions of some of his program’s staple tackling drills in an after school practice in early September. The players are moving at about half speed, wrapping their arms around the ball carrier, then letting go. It’s a far cry from the scene one would have witnessed at a high school football practice 10 years ago.

“I graduated in 1986,” McCarty said. “Our practices today are light-years different than practices then. I probably played with a concussion. Now, we save hitting for Friday night. I don’t think we’ve done 20 minutes of live hitting in our first three weeks.”

In a previous generation, a practice would have been filled with the sounds of helmets crashing, pads cracking, and players hooting and hollering over big collisions. Coaches would preach intensity, aggressiveness and toughness through every drill. Today, it’s technique, technique, technique. McCarty preaches heads up, arms in, because when the players get their arms out wide, their head will naturally drop, exposing them to head and neck injuries. His players work their tackle drills from each angle, always only wrapping, never taking the runner to the ground. 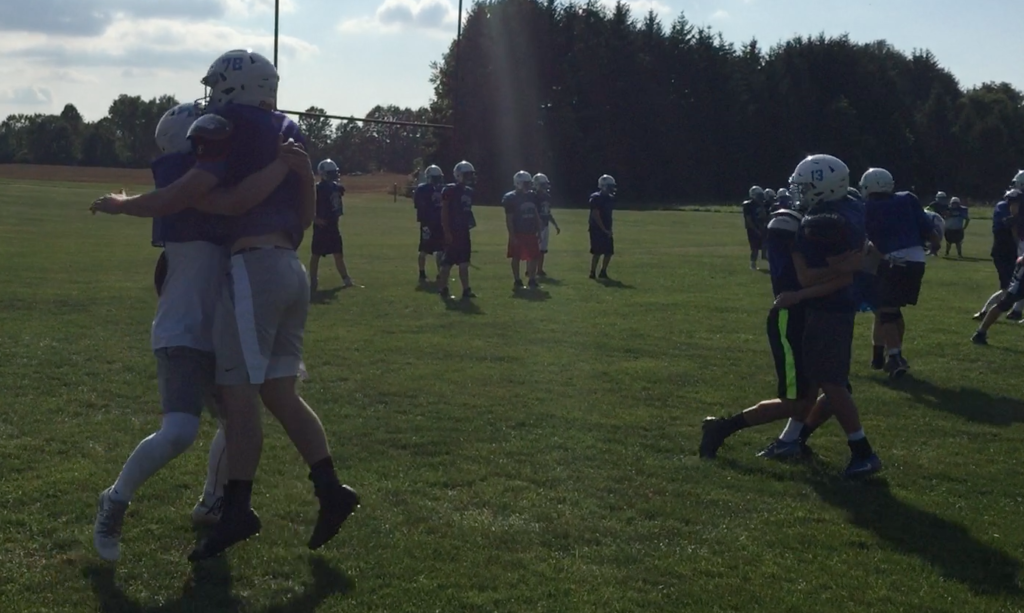 Due to increased concerns about head injuries in high school football, more time is spent on wrap-up drills like this one that focus on technique, than on full contact drills that take players to the ground. Photo by Myles Dannhausen Jr.

“We do one live tackling drill, one controlled, and one open field tackling drill per week,” he said as his players transitioned to another drill station. “Otherwise, we emphasize form.”

At Sturgeon Bay High School, Mike Leroy is in his third season as the varsity football coach. He has been involved with high school football for most of the last 20 years.

“When I first started, everything was contact,” he said. “Getting in football condition was running the nutcracker, the bull in the ring. Drills that were all about hitting hard. The days of just lining up and smash-mouth football are just done. You can’t afford to do it.”

McCarty played his high school football at Sturgeon Bay in a much different era, but he doesn’t lament the constraints of the new rules.

“Look at this field,” he said, gesturing out to the 42 kids that make up his entire high school program. Southern Door doesn’t even field a freshmen team anymore. “I can’t afford to lose any of them. It’s not like the 80 we had when I played. It ain’t no fun coming to practice and sitting in a training room for 20 minutes getting therapy.”

There are long-term implications as well.

“Eighty percent of these guys will play their last football game in high school,” he said. “I want to see them healthy when I see them 20 years from now. I don’t want them saying I risked their health to win a football game.”

In 2014 the Wisconsin Interscholastic Athletic Association (WIAA) instituted new rules for high school football practices. Acclimatization rules were put in place to force coaches to give players time to get used to playing in football equipment, and limits were placed on how much contact teams are allowed in practice. The first two days of practice are helmet only, followed by three days in a helmet and pads before real contact is allowed.

In that first week, teams are only allowed drill contact, consisting of drills run without opponents, only bags or soft-contact surfaces, and above-the-waist contact with no tackling.

In week two, teams can run full contact, but for only 75 minutes for the week. From week three on, teams are limited to 60 minutes of full-contact practice per week.

WIAA Deputy Director Wade Labecki is the association’s committee leader for football and a former football coach at Baldwin-Woodville High School. He said coaches have been receptive to the recent changes.

“We gave them a couple years to know this is coming down the pipe and involved them in the decision making,” Labecki said. “There was some grumbling, but they’ve found out they can have a life now. They don’t have to practice eight hours. The entire state is all on the same playing field now.”

While McCarty said the limits make his players hungry for live contact on Friday nights, Leroy said he has seen tackling skills diminish.

“You see it show up on film, kids are not as used to going full-speed live and making tackles,” Leroy said. “We see it from our kids and our opponents as well. There are a lot more missed tackles.”

But Leroy and McCarty are happy with the tradeoff for healthier players, a result evidenced in a study authored by Tim McGuine, Distinguished Scientist at the Sports Medicine Program at the University of Wisconsin – Madison.

“That tells me that changing coaching methods and practice habits is far more effective than expensive equipment,” McGuine said. “It’s cheap and it’s easy to do.” 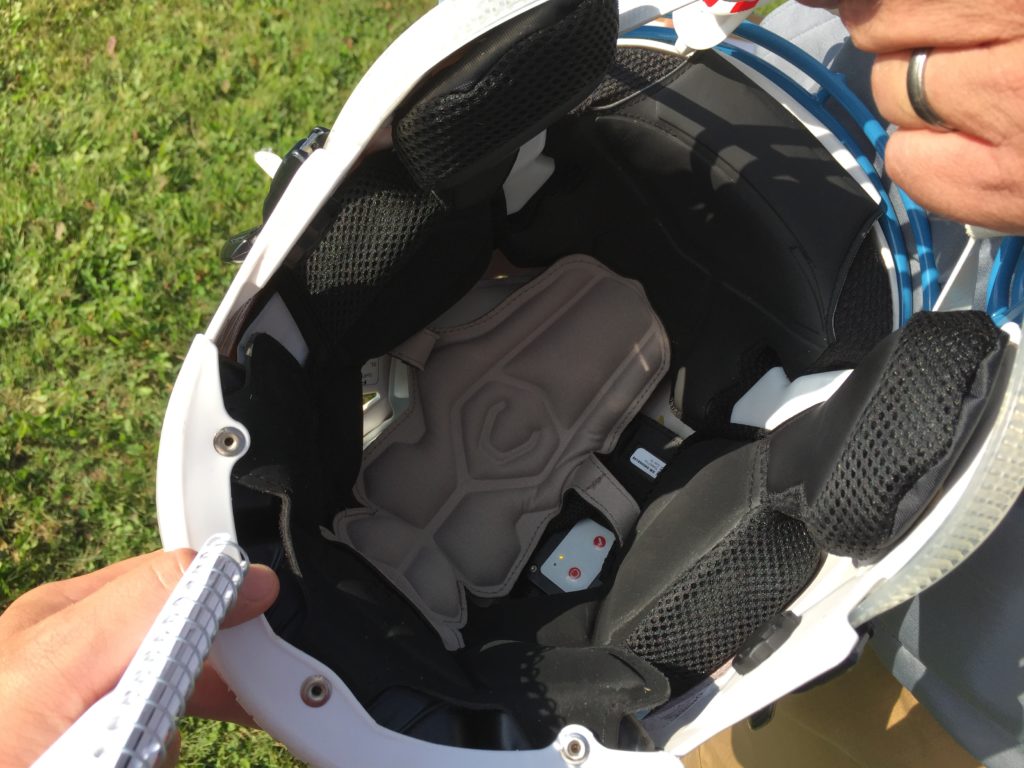 Some of the newest helmets on the market come with sensors that sound an alarm on the sidelines when severe collisions occur. Photo by Myles Dannhausen Jr.

At Southern Door, McCarty is slowly transitioning his program to newer helmets that sports equipment companies say are safer and reduce concussions. One player who has suffered a head injury in the past now wears a state-of-the-art Riddell SpeedFlex helmet with an impact sensor. If that player is involved in a serious collision the sensor will trigger an alarm on the sideline that flashes and buzzes, alerting coaches to pull him from the game. So far the sensor has not been triggered. The helmet runs about $350 and was paid for by an anonymous donor.

“Our research showed that the helmets already being used showed no difference in the rate of concussion, whether it was a basic helmet for $150, or a new one for $450,” he said. “It didn’t matter if it was older, or reconditioned, or what brand it was.”

Concussions, he said, involve a lot more than a helmet. Factors such as a pre-disposition to head injury, a previous head injury, and where the collision occurs all play a role in determining how an impact affects the athlete.

“Until you measure with hundreds of thousands of kids in different conditions, the lab test doesn’t tell you anything,” he said. “Companies will spend a lot more on marketing than they will on research about whether the product actually works. That’s just the nature of the beast.”

Leroy said his program had one concussion last year, and two through mid-September of this year. He said one player missed six weeks with a concussion that on tape didn’t seem unusual, but afterward the player said he couldn’t focus.

“It can be two to three weeks, or it can be a slow process to come back from it,” Leroy said.

That’s a big change from a decade ago, when the speed of recovery was often determined by the player or their parents.

“We used to ask, ‘Are you OK? Can you go?’,” Leroy said. “Now, with the concussion protocol and the testing that we do with athletes, we have to defer to our trainer. That’s what she’s there for.”

Most schools now implement the ImPACT (Immediate Post-Concussion Assessment and Cognitive Testing) test, a neuropsychological test to evaluate levels of cognitive functions such as memory, reaction time, and other skills related to brain function. The assessment is given to athletes at the beginning of the school year or sports season and creates a baseline against which an athlete can be measured against after a head injury.

McGuine said players in the past might have been held out a few days for a concussion.

“Now it’s an average of 14 days,” he said. “We have to be better at recognizing it, and treating it, and giving athletes time to heal.”

“I used to get pushback on that,” he said. “But there’s no point in going to class and trying to learn with a brain injury. You wouldn’t tell someone to practice a sport with a bad knee or ankle injury. All you’re doing is prolonging recovery.”

Arnold recommends that screen time be limited for athletes after a concussion diagnosis. Study time should also be limited to small blocks of time, and in severe cases, eliminated entirely until symptoms subside.

“There’s a paradigm shift on a lot of levels when it comes to brain injuries,” he said. “It will be interesting to see where this goes. I think the studies are solid, I don’t think we’re over-reacting.”

Next Week:  We look at what concussions mean for the future of youth and high school football, and the next sport facing a reckoning with head injuries – soccer.