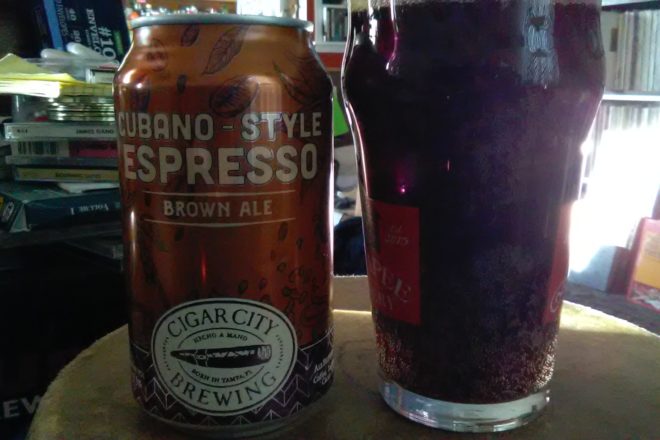 Hunting the beer aisles with nothing particular in mind might be the most difficult thing a person can do these days, but that was my dilemma on a recent Saturday afternoon.

I saw this. I saw that. And then I saw this and that again.

Everything looked enticing, but nothing was screaming, “Drink me!” and I guess that’s what I was looking for.

Back and forth I went.

I should add that it was in the crux of the polar vortex, so I was looking for something with substance. Something dark and warming.

Up and down the aisles I went, and beer at this place is in both the back and front of the store. It’s a brilliantly beercentric place. My local.

But what I went back to and eventually purchased a four-pack of was, I think, the very first thing that my eyes fell on when I walked in the store: Cubano-Style Espresso Brown Ale by Cigar City Brewing of Tampa, Fla.

Well, I love a good brown ale, but it’s a style that has been mostly forgotten in this IPA-dominant drinkfest, I think.

And as far as I recall, this would be my first experimental brown ale, meaning a brown that has been tampered with using different ingredients – in this case, cacao, lactose and Cuban-style coffee beans from a Tampa coffee shop.

The result is a well-tampered brown.

Since a brown ale usually relies solely on the use of roasted malts to set it apart from other styles, I really can’t recall another doctored brown like this.

But this is what I chose on this day of indecision.

At first, when I had my first refrigerated can of this beer, I thought everything overpowered the brown ale. Yes, the cacao and coffee were undeniably there, but where was the brown ale?

But then I pulled a can out of the magic fridge and set it on the counter in anticipation of returning from work hours later.

Everything was there, from the base brown ale to the cacao to the coffee. It was a beautiful triumvirate of flavors.